And just like that, May is crowded. This week we got release dates for a trio of May releases, just a month before they’re set to arrive: Yakuza Kiwami 2, Closer to the Sun, and Sniper Elite V2 Remastered. They’ll join Rage 2,Total War: Three Kingdoms, and A Plague Tale: Innocence in making sure we never, ever have any downtime. Ever.

That news, plus the BFG 9000 arrives in Rage 2, H1Z1’s new developers call it quits, Surviving Mars teases a new expansion, and Kotaku discusses the original concept for Dragon Age 4—and why it was canceled.

The first of next month’s games, Close to the Sun, is set to release on May 2. To refresh your memory, it looks a lot like a faux-BioShock, only with Nikola Tesla playing the role of city-founding demagogue (and presumably villain). It looks promising, but I’ve said that about a lot of games that styled themselves after BioShock and never made good on the aesthetic. We’ll see.

Yakuza picks up the pace

Last week we noted that Yakuza Kiwami 2 had been rated by the ESRB, generally an indicator the game’s right around the corner. Sure enough, this week Sega confirmed that Kiwami 2 will hit Steam on May 9, less than a month from now—and less than three months after the original Kiwami came to PC. I hope you’ve got a lot of time on your hands, because this series is excellent.

And lastly, Sniper Elite V2 Remastered locked down a May 14 release date this week. Originally released in 2012, I didn’t realize there was that much to remaster—especially on PC. Rebellion put out a comparison trailer though, so if you’d like a look at gorier X-ray killings and refined ground textures, check out the video.

I’m still a bit disappointed the superb Hitman 2 was a standard one-and-done release instead of episodic. Not sure about you, but I’m finding I have fewer reasons to return to the game month after month, and I’ve let a lot of the post-release content pass me by. That said, IO revealed two new levels this week and I will absolutely be returning to check those out. One is “The Bank,” and is set in (you guessed it) a bank. The other, “The Resort,” is represented on the road map by a placid, palm-tree covered beach. And there are also two new sniper maps on the way as well, for those enjoying the spinoff co-op mode.

The Bank is due to release in the summer, while you’ll have to wait until fall for The Resort. Check out the full road map below. 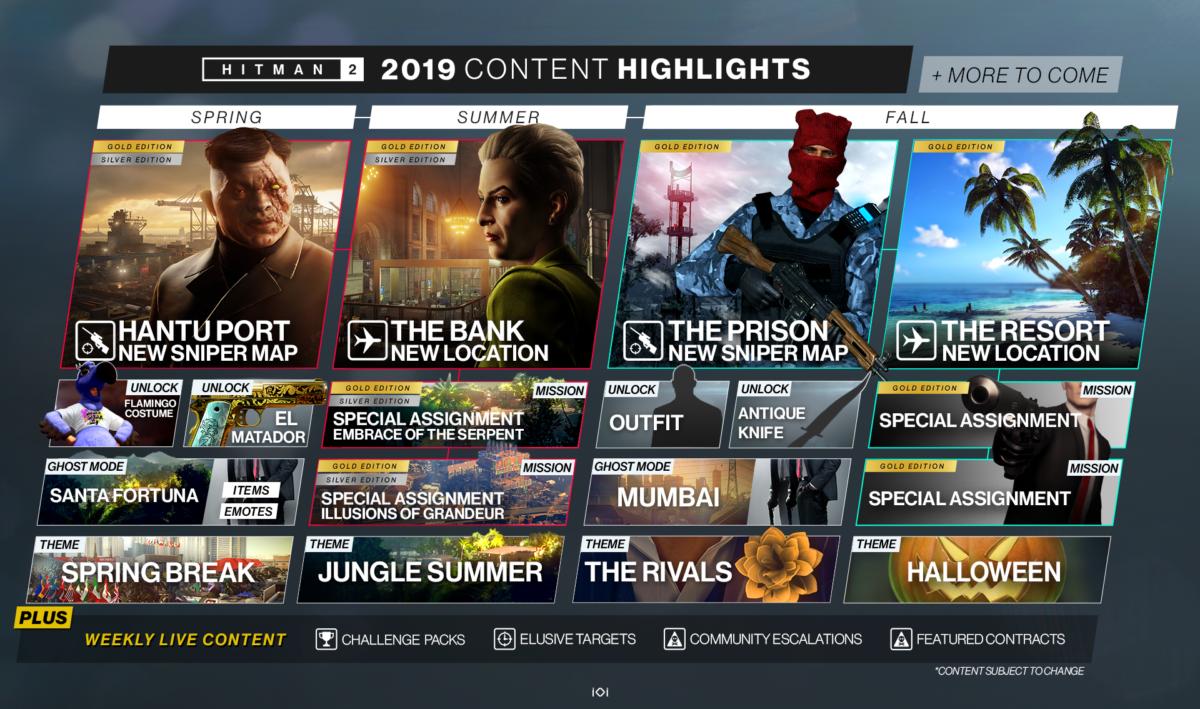 Last year I said Monster Hunter World’s planned Witcher 3 crossover might be the weird backdoor that finally made me a Monster Hunter fan. Unfortunately Capcom decided to stagger DLC releases on consoles and PC, meaning it hasn’t been around to entice me this entire time. 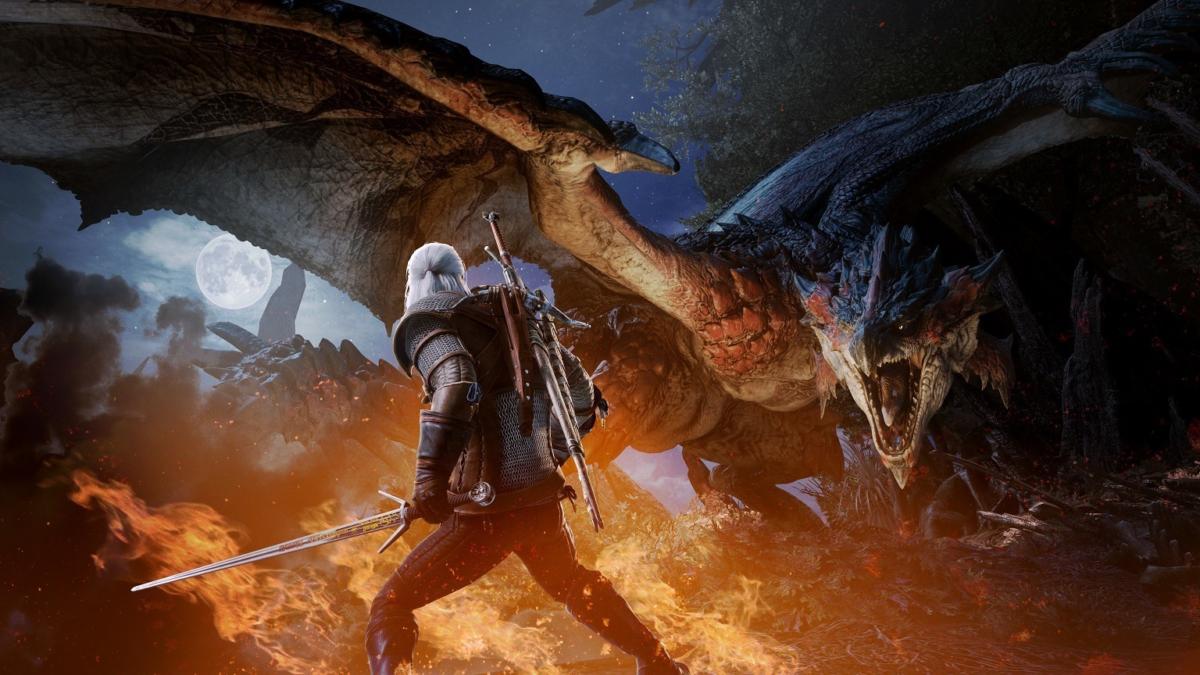 But it’s finally on its way. Starting May 9, those who’ve finished the main story will be able to access new contracts and a Geralt of Rivia armor set. A Ciri armor set will follow in the second half of the event, which is time-limited from May 17 to 30. You can find more details here.

Surviving Mars is going green later this year with the newly unveiled Green Planet expansion. Finally, your colonists will be able to escape from their tiny bubble-domes and wander a lush and lively Mars, thanks to the wonders of terraforming. There’s not much to go on in this announcement trailer, no indication how long the process will take or what you’ll need to accomplish it, but the idea seems like it will fundamentally change a lot of Surviving Mars’s systems—the most exciting type of expansion.

There are a few new Rage 2 videos this week, but let’s go ahead and focus on the most exciting—even if it does arrive courtesy of IGN. The famed BFG has escaped Doom and made it over to id’s post-apocalypse, and you can get a look at it in action below. (Skip to the end for the BFG.)

Another week, another Mortal Kombat character reveal. Get ready, because behind door number 20-something is Kitana. This TV ad is more style than substance, but NetherRealm did confirm the fan-favorite fan-wielding ninja is a playable character.

What in the hell is happening at Daybreak? Here, let me give you the abridged version of this sordid tale: Daybreak made H1Z1, a survival game. Then it made a spin-off battle royale mode, which eventually got so popular that Daybreak renamed it to just H1Z1 and killed the survival game. Then the battle royale was rebranded Z1 Battle Royale and later given to a new developer to work on, NantG.

And now? NantG has suddenly given up, writing on Steam “Despite the team’s determination and commitment to revive Z1BR’s player base with our recent Season 3 launch update, we soon realized that the road is still paved with many challenges that preclude us from long-term success.”

Last week Kotaku published an article about Anthem and what happened behind-the-scenes leading up to a largely disappointing release. And that’s fine, but not incredibly newsworthy. It’s more of the “Frostbite is bad,” et cetera we heard after Mass Effect Andromeda.

But Jason Schreier also spun out a second story this week concerning Dragon Age 4—or rather, the version of Dragon Age 4 that existed before the team was absorbed into Anthem and the project was canceled. The concept sounds pretty damn cool, so it’s a shame we’ll never see it. Via Kotaku:

“You’d play as a group of spies in Tevinter Imperium, a wizard-ruled country on the north end of Dragon Age’s main continent, Thedas. The goal was to focus as much as possible on choice and consequence, with smaller areas and fewer fetch quests than Dragon Age: Inquisition…A large chunk of Joplin would center on heists. The developers talked about building systemic narrative mechanics, allowing the player to perform actions like persuading or extorting guards without the writers having to hand-craft every scene.”

Check out the full story for more details, and then maybe pour one out for BioWare’s singleplayer ambitions—it sounds like the new Dragon Age 4 will be more games-as-a-service oriented.

Games Inbox: Has no Halo Infinite put you off buying an Xbox Series X?