Sushi Go is one of the easiest games to recommend in the tabletop world. The simple card drafting mechanic and engaging round-based play are fun for almost any player group. And there’s something charming (and a little hunger-inducing) about the little anthropomorphic maki rolls and puddings that make up the cast of “characters.” I regularly recommend the game to families who are ready to introduce kids to more engaging board game options, but I also happily break the game out at get-togethers with experienced gaming friends, and I’ve never heard complaints. It’s a simple, fun game that plays well in almost any circumstance or group.

The recently-released Sushi Roll feels like an obvious and natural next step for the concept and franchise, and I’m pleased that it manages the same balance of accessibility and engaging gameplay. The focus is on dice instead of cards, and the rules throw some new wrinkles into the recipe, but experienced Sushi Go players will instantly grasp the fundamentals. And thanks to smart, concise rules-writing, newcomers with a fondness for dice rolling can easily join in on the fun.

Conceptually, Sushi Roll is all about having a delicious meal. Throughout three courses (rounds) you’re going to grab various sushi pieces off the conveyor belt, with different pairings and sets earning designated point totals. There’s only so much sushi to go around, so you’re competing with the other players for the most maki rolls, to grab the wasabi that tastes especially good with your nigiri (and triples its point value), and of course, you want to save room for pudding to close out your meal, among other targets. 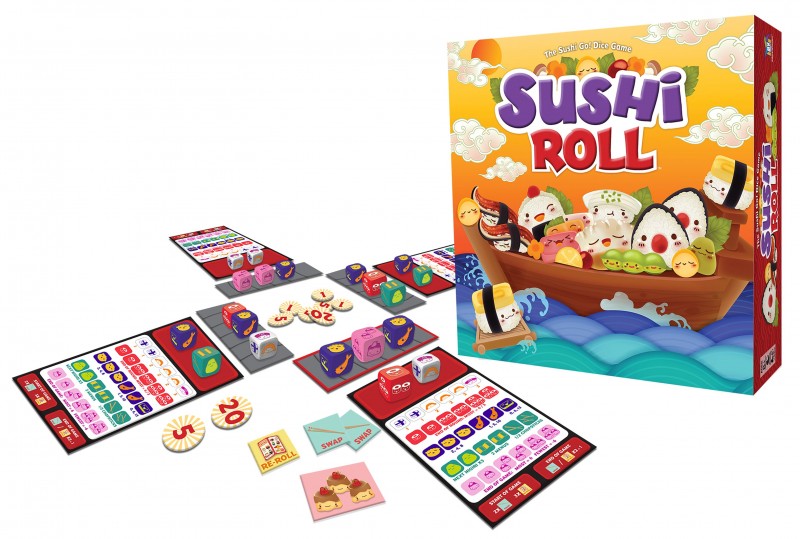 Instead of cards that depict specific menu items, the game is instead played using dice drawn from a blind bag, from a pool of 30 total. Different colored dice represent different types of food, from appetizers to maki rolls, but it’s not until you roll the dice that you know exactly what is on offer. Perhaps one die depicts a chopsticks result, which can be snagged onto your tray to allow you to swap a die with an opponent. Your appetizer die might give you that third tempura you need for a big score, or a riskier sashimi result that will only score if you manage to get another before the round ends. While die rolls add a greater element of chance, the availability of reroll and swapping dice results with other players provides a lot of flexibility to lock in a preferred strategy, and I found the randomness of the die results adds excitement to the proceedings, rather than frustration.

Like in the original Sushi Go, the twist comes through the drafting process that follows your initial die selection. After rolling all your dice and picking your preferred result on one of them, your remaining dice pass to the player on their left, even as you receive the leftover dice from the player on your right. All the dice are rerolled, and the process repeats. In this way, you’re forced to think ahead about your set collections. Are there still enough purple appetizer dice on the table to justify going for that big dumpling score? How many maki roll dice have my opponents already snagged, and should you still try to go for the award of having the most this round?

Behind the scenes, multiple playthroughs reveal a carefully balanced experience with various viable strategies. While it’s easy enough to hop in and have a good time, subsequent plays showcase the importance of varying your approach round to round, and using rerolls and swaps to prop up your point tally. Unlike some drafting games, I like the way you can always look ahead and plan an approach based on the dice still in play on the “conveyor belts” as they circle the table; it allows for more forward-thinking, and lets you arrange carefully laid plans for your meal, only to see those plans come crashing down as someone picks up that tempura you’ve been waiting for. 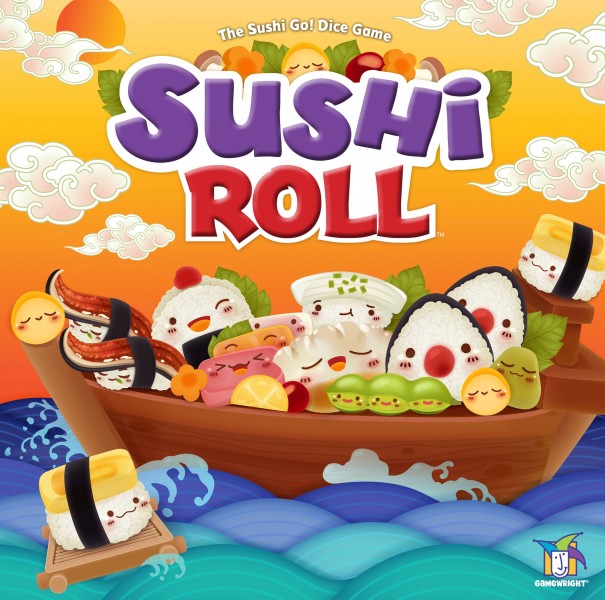 There’s something undeniably appealing about the tactile feel of picking up and rolling a big handful of dice, a small and joyful moment that game designers have tapped into since the inception of games of chance. Sushi Roll capably transitions the fun of the original Sushi Go to a new play paradigm. The dice-based play feels new enough to justify a purchase for fans of the original, but this new Sushi Roll release could easily be an introduction to these games, as well. With quick-playing 20-to-30-minute games for up to five players, it’s an easy recommendation if you want something breezy and colorful, yet still engaging and smartly balanced.

Looking for something a bit meatier for your next board game purchase? Click over into the Top of the Table hub from the banner below, where you’ll find a plethora of additional tabletop gaming recommendations for your gaming group. I also make a point of following up by email with anyone who wants a more personalized recommendation for their gaming table; drop me a line, and I’ll help you find what you’re looking for.

Matt Miller explores the ever-expanding world of tabletop board, card, miniature, and role-playing games in his column, Top of the Table. Check back every other Friday for the best in the hobby scene.