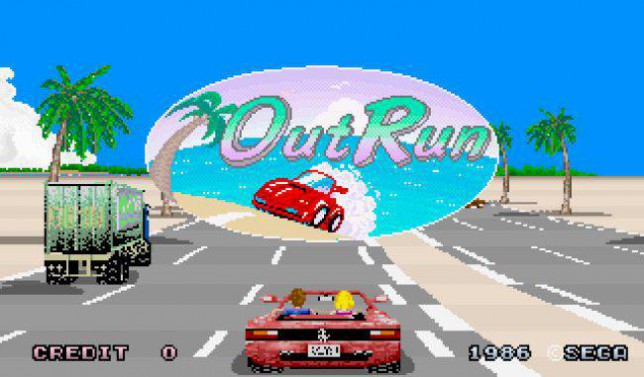 A reader recalls his childhood years playing OutRun in the arcades and the many ways that Sega invoked the spirit of summer freedom.

If my teenage years playing OutRun in the arcades has made my ‘grown up’ driving that little bit more reckless then I should take this opportunity to apologise to my fellow motorists. Indeed, my appalling lack of restraint behind Sega’s chunky steering wheel was the reason I never got further than the game’s second stages. But that didn’t matter because OutRun wasn’t just about driving, it was about summer and all the freedom, fun, and adventure the season brings.

When I first saw OutRun, back in the 80s, I was immediately smitten. It was classy and expensive (50p a go!) and had state-of-the-art graphics and great music. However, when I look back now, my sense of nostalgia amplifies the game’s seasonal theme and reminds me that it was, and still is, the perfect summer game.

There’s an overwhelming amount of detail to suggest that the game’s designers have a passion for the season. Every screen, every frame, and every sound in OutRun seems designed to let players know that this game takes place at the height of a magnificent summer. Even the logo features a palm tree and a shimmering blue ocean.

The game’s producer, Yu Suzuki, has said that he wanted to make a driving game more than a racing game. He clearly wanted players to enjoy the journey more than the destination. The scenery as much as the gameplay.

And what scenery it is. The opening stage is a beautiful coastal road lined with palm trees, white sands, and colourful beach huts. There are windsurfers out on the waves and serene blue skies overhead. Further stages feature a dusky savannah, rolling meadows, a vineyard, and a desert. But, obviously, it’s the opening level everyone will see and it’s the one where the game’s sunny ambitions shine the brightest.

It’s also the level with the coolest sounding name. It’s called Coconut Beach Boulevard and if the person who thought of that was trying to come up with the most tropical sounding stage name possible, I think they may well have succeeded.

Even the music tracks have names with seasonal connotations, while the music itself reflects summer moods as well as summer activities. Passing Breeze is a laidback jazz number whose dreamy riffs are well suited to those summer days when you just want to sit back and do as little as possible. Magical Sound Shower, on the other hand, is a fast and exciting song with an accelerating pace which fits the driving nicely, as well as evoking that sense of freedom and adventure that we all remember from long summer holidays. It also features some Caribbean drums to further enhance OutRun’s tropical credentials.

One of the unsung heroes of the game’s score is Last Wave. It’s a mellow, slightly melancholy song with gently breaking waves playing in the background and it always kicks in on the game over screen. That screen is truly special. It depicts a gorgeous sunset with palm trees in silhouette. When it first appears, a row of little pixel-based sports cars race across the screen, the smoke from their exhausts clearing to reveal the names of those lucky and skilful enough to get the highest scores.

I think the fact that the game over screen depicts a sunset is significant. If OutRun has a story it is simply that two people went out racing for the day. When the race is over, the day is over. Last Wave has a downbeat tone because everyone’s fun on a beautiful summer’s day has come to an end.

By contrast, the beginning of the game is a bright, loud, crowded starting line, the screenshot of which has become one of the most iconic images of 80s gaming. But as far as I’m concerned, it’s also an iconic image of summer. There are plenty of other games which have seasonal themes and visuals but as far as capturing the magic of summer goes, I don’t think any of them can outrun OutRun.

Legends Of Runeterra: Empires Of The Ascended Will Add 110 New Cards On March 3