Voice of customer (VoC) analytics platform Wonderflow today announced that it raised $20 million in a funding round led by Klass Capital. The capital, which brings the company’s total raised to $25 million to date, will be used to grow Wondeflow’s teams in Europe and North America to offer “strong support to enterprise customers,” according to CEO Riccardo Osti.

Most enterprises that generate large amounts of customer feedback aren’t able to properly leverage the data that they’ve collected. In fact, a Forrester survey found that between 60% and 73% of all data within corporations is never analyzed for insights or larger trends. Wonderflow occupies a category of tools, VoC, that’s attempting to reverse the trend in customer experience. There’s major enterprise interest — according to Gartner, the VoC market is likely to grow 20% to 25% per year, driving the software market size above $2 billion.

Wonderflow was founded in 2014 by Italian entrepreneurs Osti, Giovanni Gaglione, and Michele Ruini, all of whom met in Trento. The company was a part of the Rockstart Accelerator Program, one of Europe’s first startup incubators, based in the Netherlands. During this time, Wonderflow established offices in Amsterdam and caught the eye of multinational brands such as Philips. After nabbing its first angel investors, it became the sole data provider for Philips and began attracting additional customers and partners, Osti says. 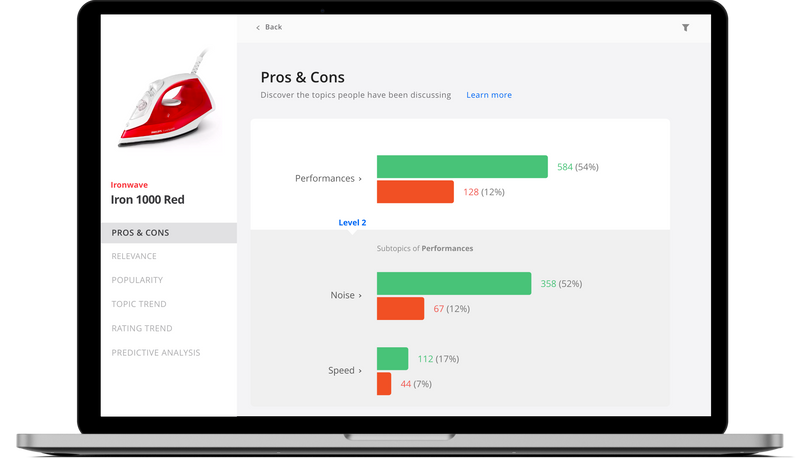 “As an advanced feedback analytics solution, Wonderflow works by collecting customer feedback from hundreds of sources [including online reviews and support center records] and analyzes them in a single place with AI and natural language processing and predictive technologies,” Osti explained. “The platform can detect product or service issues among the millions of online reviews, make predictions of outcomes based on VoC data, offer suggestions for process improvements, and much more.”

With Wonderflow, users can navigate an internal dashboard, the Wonderboard — a web app designed to access to VoC insights. The analyses it performs can impact a business’ top line, Osti asserts, by transforming cost centers like customer support into “profitable resources.” Companies can achieve tangible ROIs by drawing on learnings from customer feedback. And they can study the competition using millions of feedback data points shared with Wonderflow, ostensibly saving money in market research.

Wonderflow used an extensive data lake of indexed, cleaned public feedback from hundreds of thousands of products to create machine learning models around business use cases. It can map specific product issues to parts of products, for example identifying which part might be causing a malfunction. Moreover, Wonderflow can pinpoint which feature of a product should be improved to gain the highest favorability ratings from customers, according to Osti.

On average, Wonderflow says its VoC analysis covers 100 to 150 topics for product categories organized in a hierarchy. For each topic, after data cleansing and deduplication steps, its AI determines customer feedback sentiment on a 3-level scale: positive, negative, or neutral. Wonderflow claims that for most consumer goods verticals, it can achieve 82% sentiment analysis accuracy.

One Wonderflow customer, a “leading brand” in the consumer electronics space, found that customers had a hard time cleaning the filters in a vacuum cleaner model. Leveraging Wonderflow, they released a new version and increased the vacuum’s star rating by 0.7.

“We’re impressed with Wonderflow’s cutting-edge technology and culture of innovation. The way Wonderflow uses advanced AI to analyze customer feedback is clearly disrupting the market,” Daniel Klass, founder and managing partner of Klass Capital, said in a press release. “During the time we spent with Riccardo and the Wonderflow team, we were struck by their tenacity and collaborative approach with their partners.”

Another client, a ride-hailing company based in the United Arab Emirates, discovered via Wonderflow that driver turnover rate was high due to expensive gasoline. To address this, the company gave drivers a gas discount, which cut churn by 30%.

Despite the pandemic and competition from rivals like Revuze, Chattermill, Thematic, Stratifyd, and Clarabridge, Wonderflow says that annual recurring revenue grew 100% in the past 12 months. The company now has hundreds of employees across its offices in Amsterdam, Milan, and Trento and a customer base that includes Philips, Colgate-Palmolive, Uber, DHL, De’Longhi, Reckitt Benckiser, Beiersdorf, Beko, Samsung, GSK, Lavazza, Grundig, and Kantar.

“During the health crises, we have continued company operations — growing the team and developing our client base and our solution. We’ve also supported businesses in getting actionable insights into employee engagement and motivation during the pandemic,” Osti said.

Rainbow Six Extraction "Will Appeal To A Wide Variety Of Players," Ubisoft Says