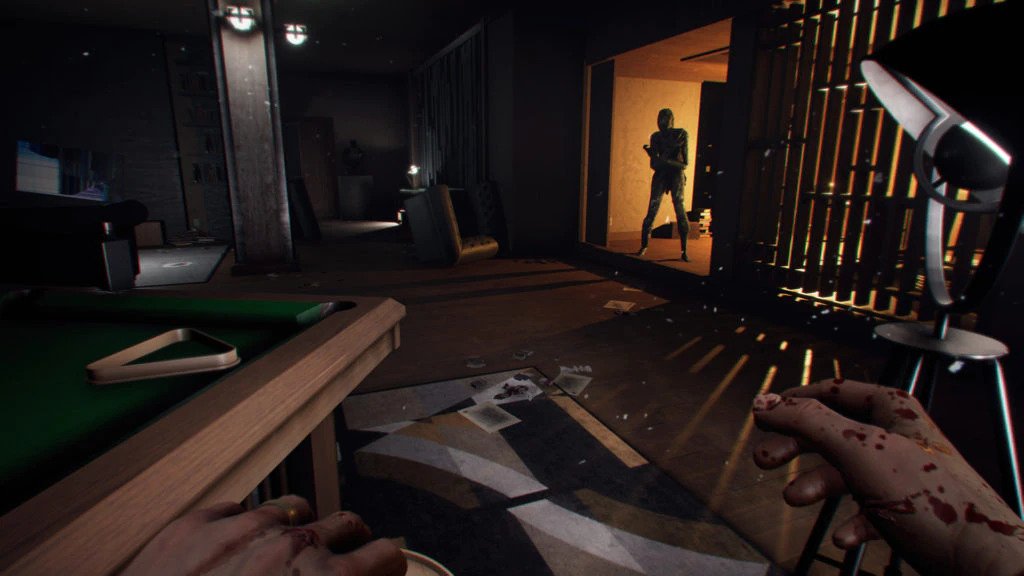 The new survival horror game on Oculus Quest is a ghost story reminiscent of a supernatural version of Alien Isolation.

It’s really not hard to scare someone when they’re playing a VR game. The minute you’re immersed in the virtual reality it’s easy to be startled by anything suddenly appearing in front of you, whether it’s meant to be particularly scary or not. For some, Ocean Descent from PlayStation VR Worlds – meant as a first-time introduction to VR – is more than enough to frighten, so the idea of a dedicated horror game may not necessarily appeal to everyone. Especially given the cheap shots some games take, in trying to trigger the most common phobias.

Wraith: The Oblivion – Afterlife (not to be confused, although you could hardly be blamed, for either Wraith or Afterlife, both of which are existing VR games) aims for more than just jump scares. In terms of its more complex storyline and more involved gameplay there’s much more to it than just having scary things run at you, although there is a certain amount of that as well.

Afterlife is part of the World Of Darkness franchise, which means that technically its full name has three subtitles and it shares a family tree with Vampire: The Masquerade and the recent Werewolf: The Apocalypse – Earthblood. All three games are by completely different publishers and developers though, so while they’re all set in the same fictional world the games have no real connection. Given how bad the Werewolf game was that’s clearly a good thing, although there’s really no comparison anyway as Afterlife is essentially a whodunit… where the victim is you.

The original tabletop role-playing games for World Of Darkness are all based around classic monsters, so you’ve got vampires, werewolves, mummies, and various forms of ghost. Afterlife’s story takes place in a Hollywood mansion owned by movie mogul Howard Barclay, who organises a séance with fellow movie stars and bigwigs. You are there as a photographer to document events, which doesn’t go quite to plan when everyone, including you, ends up dead.

Exactly what happened though you don’t fully remember, a situation that is not helped by the fact that you now have an evil doppelgänger who acts as narrator and a kind of devil on your shoulder, who doesn’t want you to redeem yourself. We’re not sure we fully understand the distinction between other ghosts but being a wraith is a more physical experience than you’d expect, as you still have a corporeal form and only learn to walk through walls later on.

Before that though you’re able to make use of telekinesis and a flashbulb effect inspired by your former career. This is the only way of dealing with spectres, a different species of ghost that you have no other defence against and yet will kill you (again) in an instant.

Despite all your neat new abilities, which lend the game an almost Metroidvania quality, Afterlife is essentially a stealth game where you spend the whole time trying to avoid the spectres. This makes it surprisingly similar to Alien Isolation, complete with hiding inside cupboards while you watch a monster roam about outside.

Just like the alien, the spectres have excellent hearing and are very fast, so not only do you need to stay hidden behind furniture and the like, but you also have to make sure you don’t make any noise. The spectres won’t track you around the whole game world, and it’s very clearly signposted the little areas that they patrol, but getting close to them is always an impressively tense affair.

VR games often manage to make fairly cliched gameplay elements seem fresh simply because of how immersive they are, but while that’s certainly true of some aspects of Afterlife this isn’t just Alien Isolation with a change of setting. Not only are you trying to escape from the monsters but you’re also attempting to earn yourself a more comfortable afterlife, which involves working out exactly what happened at the séance and the backstory of all the characters.

Although the stealth works well there aren’t really any puzzles in Afterlife, but instead what are essentially fetch quests. Again, Isolation wasn’t much different but for a game that takes a more cerebral tack than other horror games it’s a shame that so much of the to and fro of progression is fairly mindless. Since there is other stuff going on, it doesn’t ruin the experience but at over six hours long the whole thing could maybe have done with being edited down a touch (which definitely is just like Isolation).

The visuals are not that impressive, even given the Oculus Quest’s inherent limitations, and there are quite a few minor bugs and glitches. But what is very good is the audio design, which has you bristling with fear at almost every noise you hear (this makes wearing headphones a must, given the Oculus Quest’s rather weedy speakers). It works especially well because the game doesn’t overdo the scripted sequences with the spectres and often times they’re not actually there and it really was just your imagination.

Unfortunately, the voice-acting isn’t of the same standard, which is especially disappointing as the script is surprisingly ambitious. So often games with a supernatural theme skate around the big questions their setting implies but Afterlife isn’t so timid. The séance only happened because of Barclay’s fear of whether there was life after death or not, with the game going to surprising effort to paint the characters as real people, with relatable wants and desires, instead of just props in a theme park ride.

The backstories for each of the spectres is disturbingly tragic and their physical appearances, which reflect their character and cause of death, equally so. Afterlife’s low budget is a little too obvious at times, but this is one of the most effective VR horror games so far. Not just in the fact that it’s genuinely frightening but that it actually tries to get under your skin instead of just in your face.

In Short: A largely successful attempt to create a more cerebral style of horror game, even if it frequently comes across as just Alien Isolation with ghosts.

Pros: Impressively serious atmosphere which doesn’t rely on jump scares but still manages to keep you on edge. Wide range of unlockable powers and an interesting and reflective story.

Cons: The lack of puzzles and reliance on fetch quests can become a chore. A little glitchy, with poor voice-acting and weak graphics.