Home » Nintendo » Zelda: Breath of the Wild sequel trailer – Hidden details you may have missed

Even though it’s less than two minutes long, there’s a surprising amount of hidden details in today’s trailer for The Legend of Zelda: Breath of the Wild sequel. We’ll pop out some details to see if there’s anything you might have missed.

In the first few seconds of the trailer, we hear a creepy tune sounding like it’s sung by an undead choir. It actually sounds like the audio of this tune was reversed, so we went ahead and tried reversing it back to see what it sounds like the other way. The music part starts 40 seconds in.

Forwards or backwards, what does this tune mean? We’re not sure yet, but the internet has some ideas. 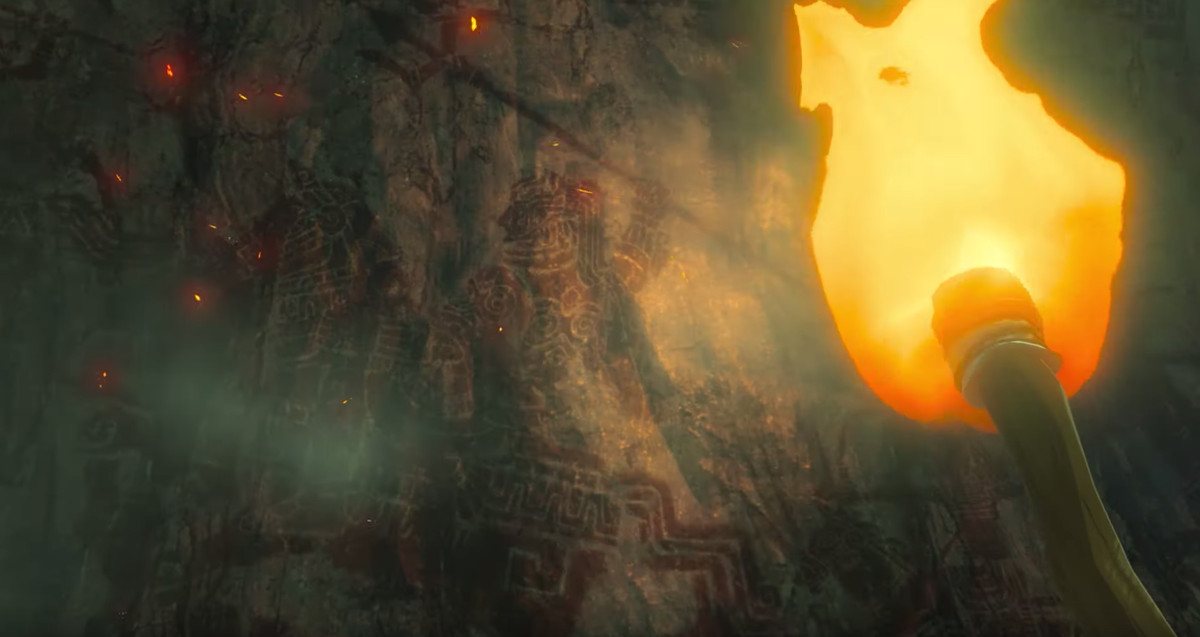 The next note-worthy moment happens 20 seconds into the trailer. We see a torch pass by some ancient wall paintings, revealing a drawing of someone on horseback with a trident. The person’s armor and hair seem similar to the dead body we’ll see in a few moments. Are they some sort of hero or villain? Or maybe it’s Ganondorf? Unclear, but the armor’s markings are reminiscent of the Ancient Armor that Link unlocks late into Breath of the Wild, seen here: 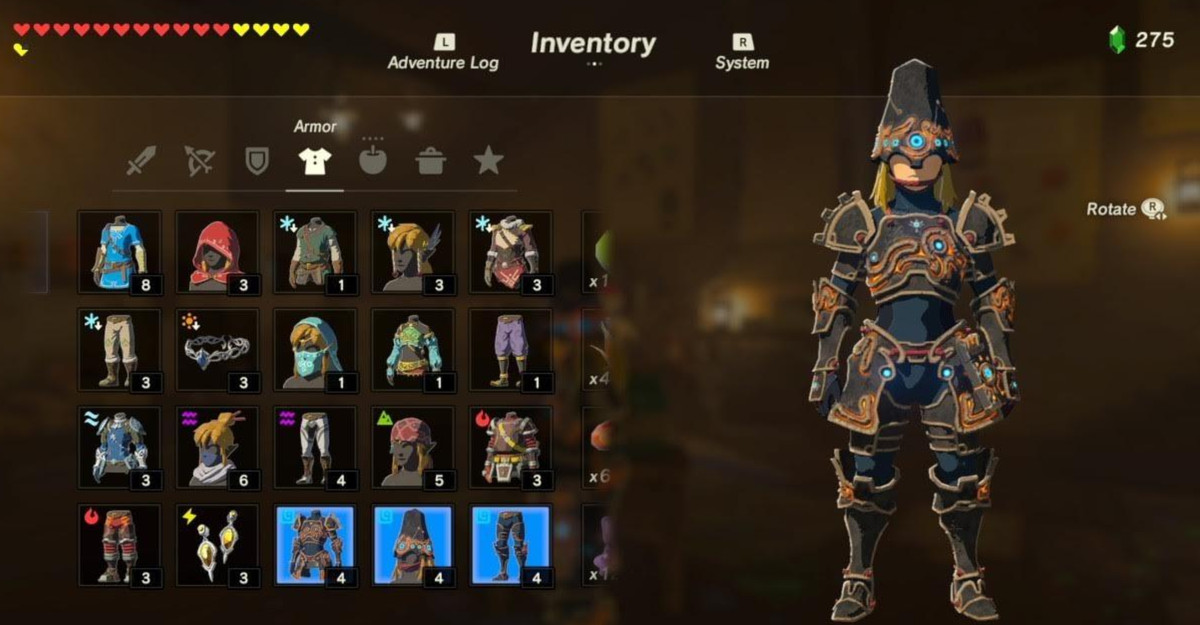 We also see these patterns throughout Breath of the Wild’s many shrines. So yeah, they’ve been here a while. 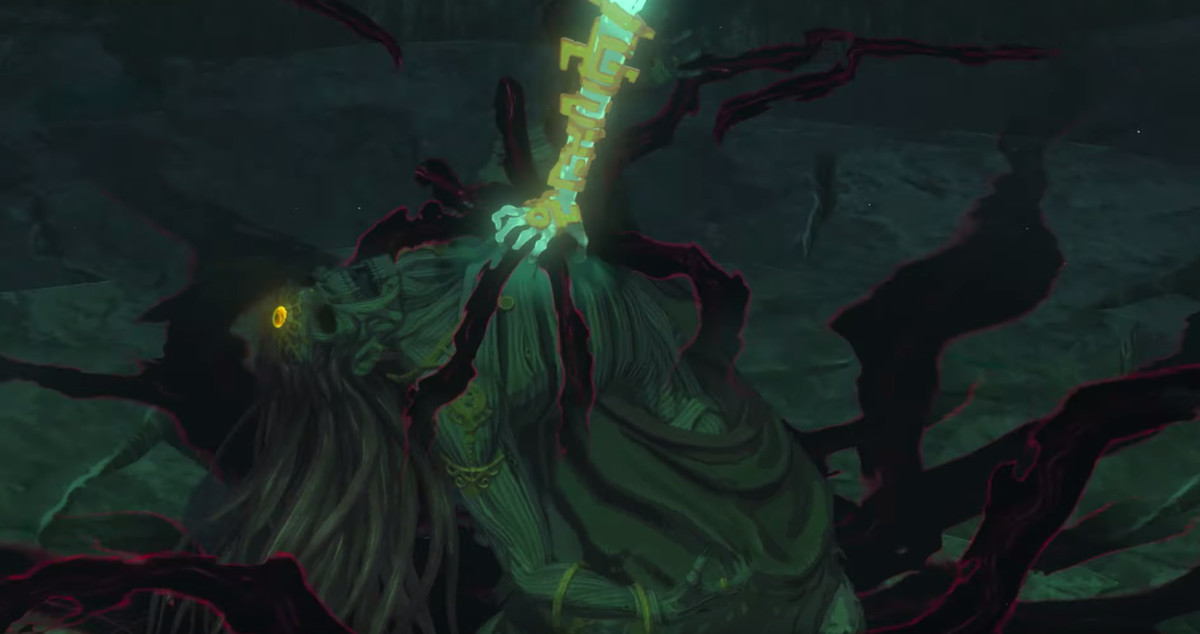 So who is this dead body? The body’s golden bangles and diadem scream Gerudo to me. So is it just Ganondorf? Here’s a shot of Link in the male Gerudo armor set. 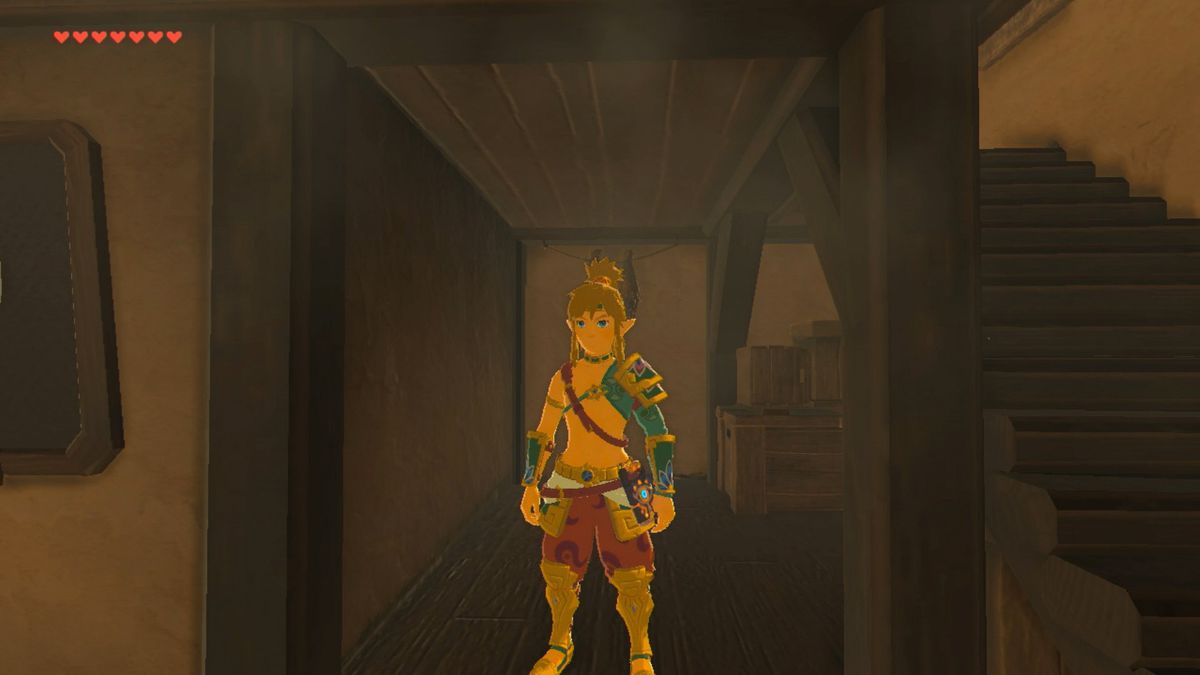 Again, definitely some similarities. We’re also going to assume that it’s the same character as the one depicted in the wall painting.

ZELDA GOT A HAIRCUT 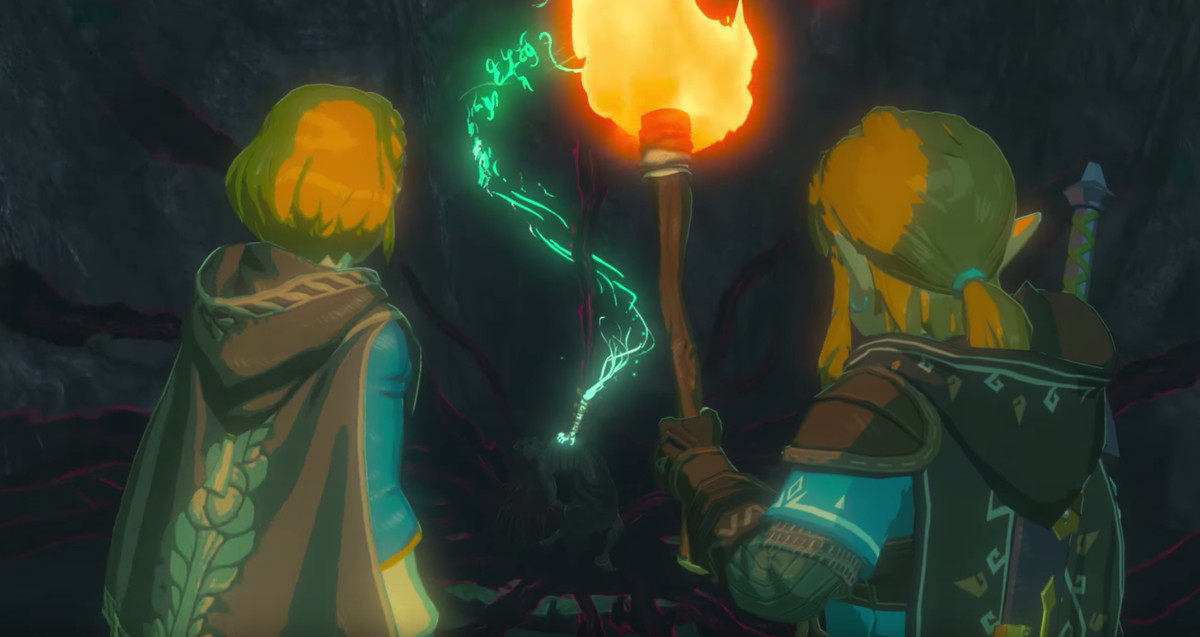 This may seem petty, but Zelda’s hair is considerably shorter than when we last saw her.

We think it looks great! But it also may imply something even more interesting: Zelda as a playable character. Zelda’s previously long hair is a pretty tricky thing to animate in a video game, especially on an modestly powered console like the Switch. Making her hair shorter means less of an animation lift for the developers and therefore more resources they could put into the world around her. 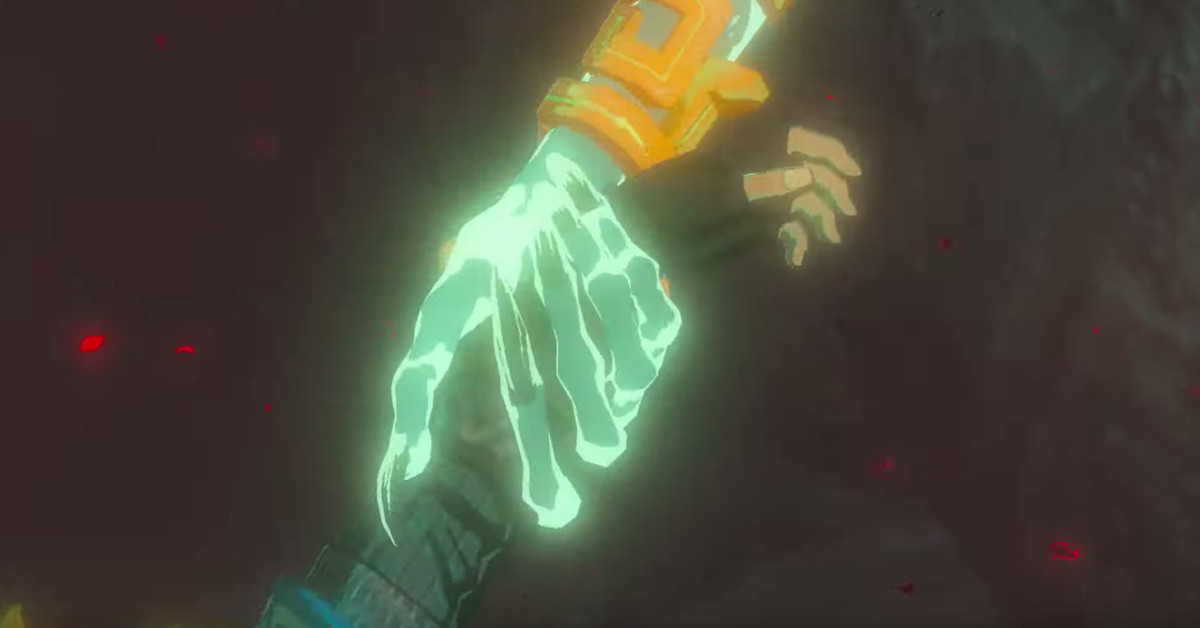 At 45 seconds in we see a very brief flash of Link getting grabbed by the creepy ghost hand that was reviving the mysterious dead body. If this happens very early in the game, he may need rescuing and who better to save him than Zelda?

Shortly after Link is grabbed, we see this still: 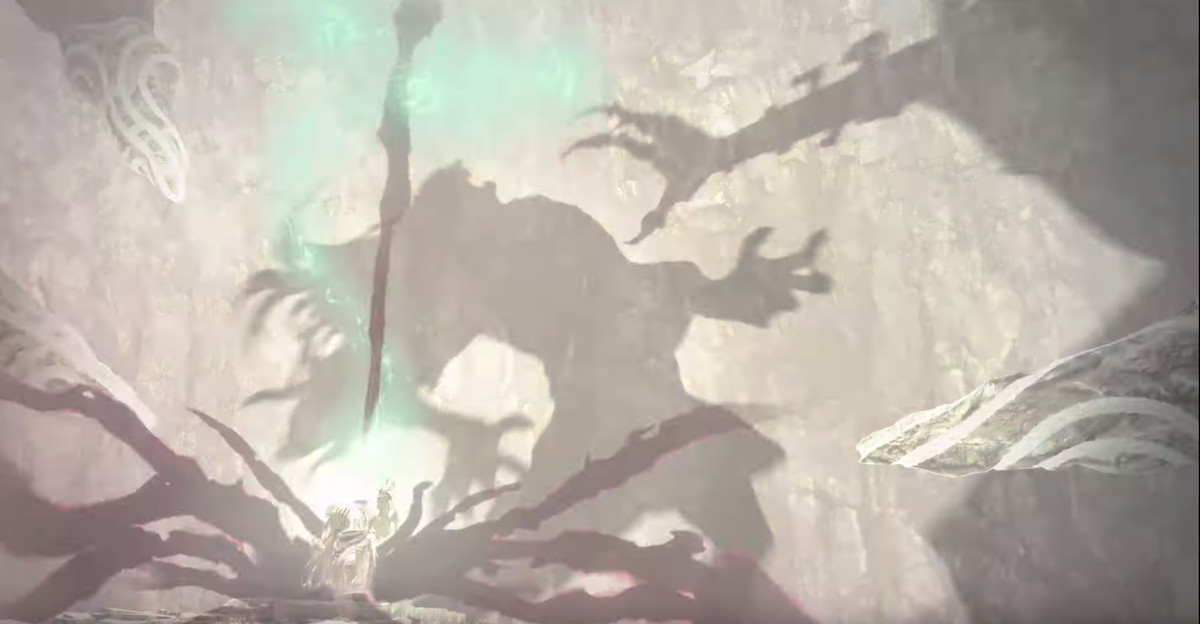 Here we can see what appears to be the same hand grabbing at the character previously depicted in the wall painting and the dead body.

After Link is grabbed, the body’s eyes spring to life and we get a shot of Hyrule castle rising into the sky. 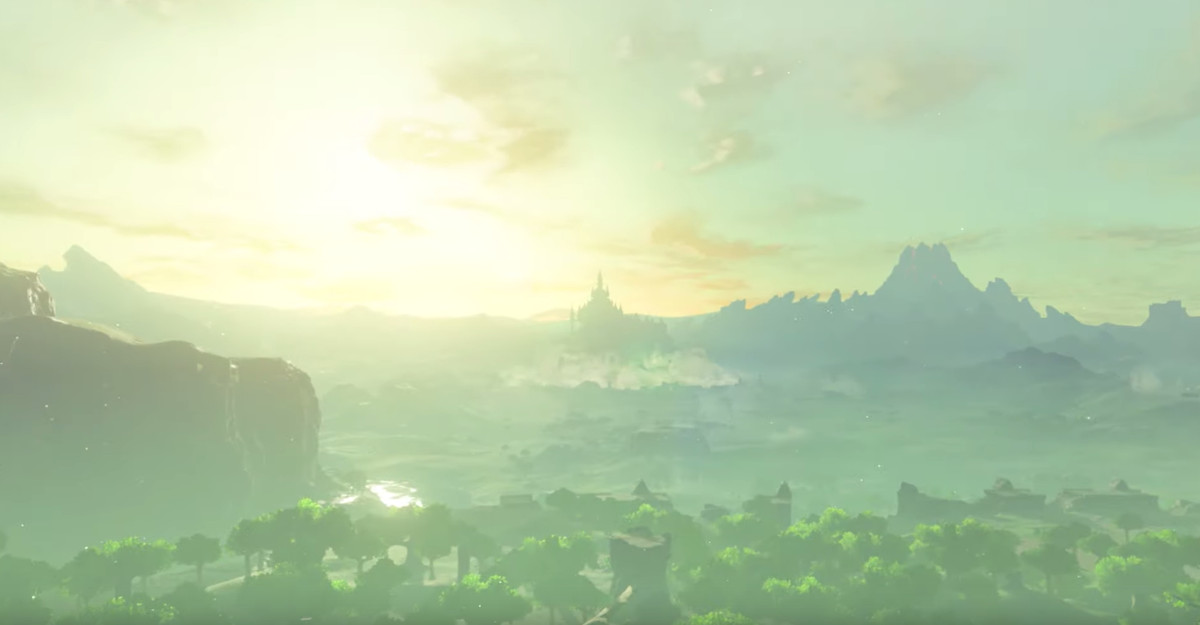 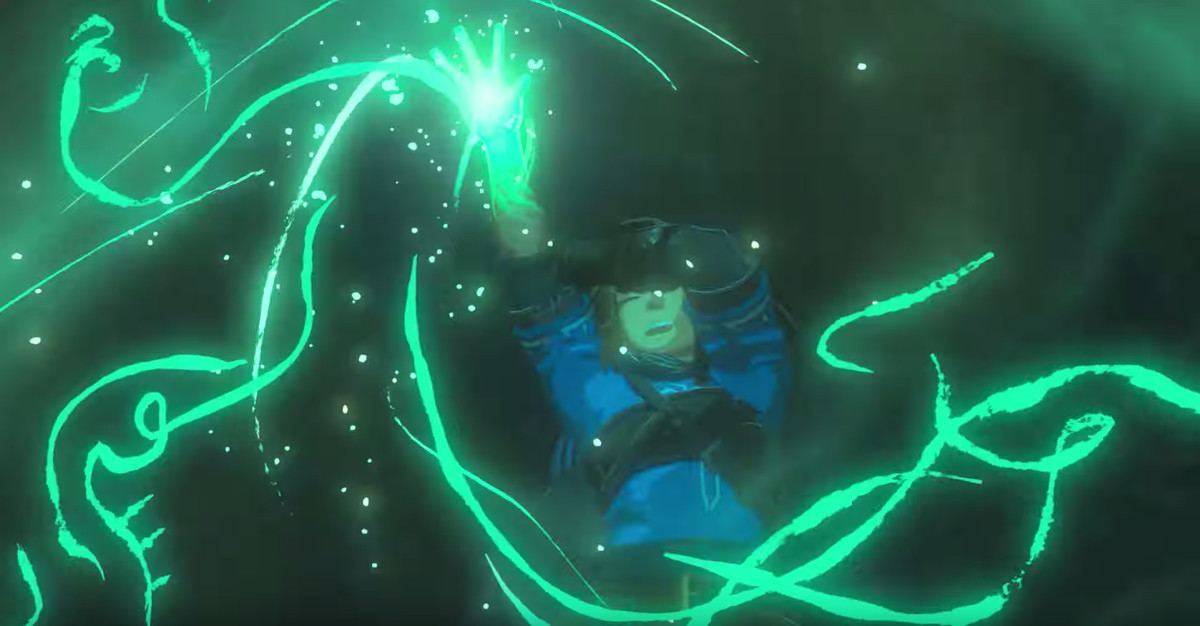 It’s obviously extremely early to know precisely what’s going on here and what the game will be about, but based on the above, I’m gonna take a stab.

It seems that there’s some sort of malevolent force that, in ancient times, corrupted a hero and used that hero’s power for evil. That hero was the one wielding the trident in the wall painting and his or her body is what lies in the center of the room. I’m going to guess that it’s not Ganondorf, but I could be very wrong.

The white ghostly hand seems to be this malevolent force and now it has found a new hero to suck the power from: Link. It’s Link’s power, seen as that white force blasting from his hand, that revives the body and kicks off the events of the game.

With Link out of commission, we’re expecting Zelda to take the lead here to save the day. Or, at the very least, be one of the two main, playable characters.

So when will we know for sure? Probably not until 2020 at the very least. Nintendo tends to reveal new Zelda games years in advance – Breath of the Wild was announced nearly four years before it was released (then an untitled Wii U game) – and we wouldn’t expect this new one to drop before fall of 2020 at the absolute earliest.

But no matter what it’s about or when it releases, count us in.

Nintendo doesn’t see acquiring other game studios as ‘a plus’

How To Make A Tarantula Island In Animal Crossing: New Horizons