Anthem made only a brief appearance at E3 2019, and it seems like the game is going to be out of the spotlight for some time while BioWare works on retooling the game and addressing player concerns.

One of the issues I heard from players repeatedly when they discussed Anthem was that it just wasn’t what they wanted, or expected, from a BioWare game. The narrative was confusing and poorly conveyed through cutscenes, emails, and radio chatter that weren’t connected to the action. The main selling point of the game, cooperative play, didn’t influence my Freelancer’s story or how I felt about the world. I walked away from Anthem feeling disappointed, and I found refuge in a different cooperative BioWare title: Star Wars: The Old Republic.

In a galaxy far, far away…

The Old Republic is the MMORPG that serves as a sequel to the Knights of the Old Republic RPG games, one of which was developed by BioWare and the other by Obsidian Entertainment. The MMORPG was backed by a massive budget, high-quality cinematics, and a promise of eight full BioWare campaigns — one for each character class — for players to enjoy.

The game was also chock full of grinding, combat was slow and unwieldy, and story quests were locked behind countless side-quests. It often felt like work, and many players had moved on by the time the game went free-to-play in 2012.

Now, in 2019, I find myself eagerly playing through Star Wars: The Old Republic. I craved player agency, conflict between me and my friends, and feeling like one protagonist of a story I played through with others.

The Old Republic is better at scratching those itches than I remember. BioWare Austin has gone back to sand down the rough edges of the game, and to improve all the issues that kept me away before. The combat is faster, even though it’s still kind of boring, and I don’t have to grind and complete every quest on each planet to move ahead. Sorry, scared villagers! I’m never going to farm Bantha hides for you again! I’m moving onto bigger and better things, and I’m doing so much quicker.

The Old Republic includes eight stories with the standard game, and there are more stories available through the host of expansions. The class stories are all over the place in terms of quality — Jedi Knight and Sith Warrior are clearly the A-plots, while Smuggler and Imperial Agent serve as the B-plot — but the game eventually brings all the characters together to take part in the same storyline.

You still get to make choices, of course. You can choose between the Light or Dark Side of the Force, and you will experience different outcomes depending on your actions. A jump in time that occurs in the main story spices things up further, shaking up your stable of companions and changing the political landscape around you. 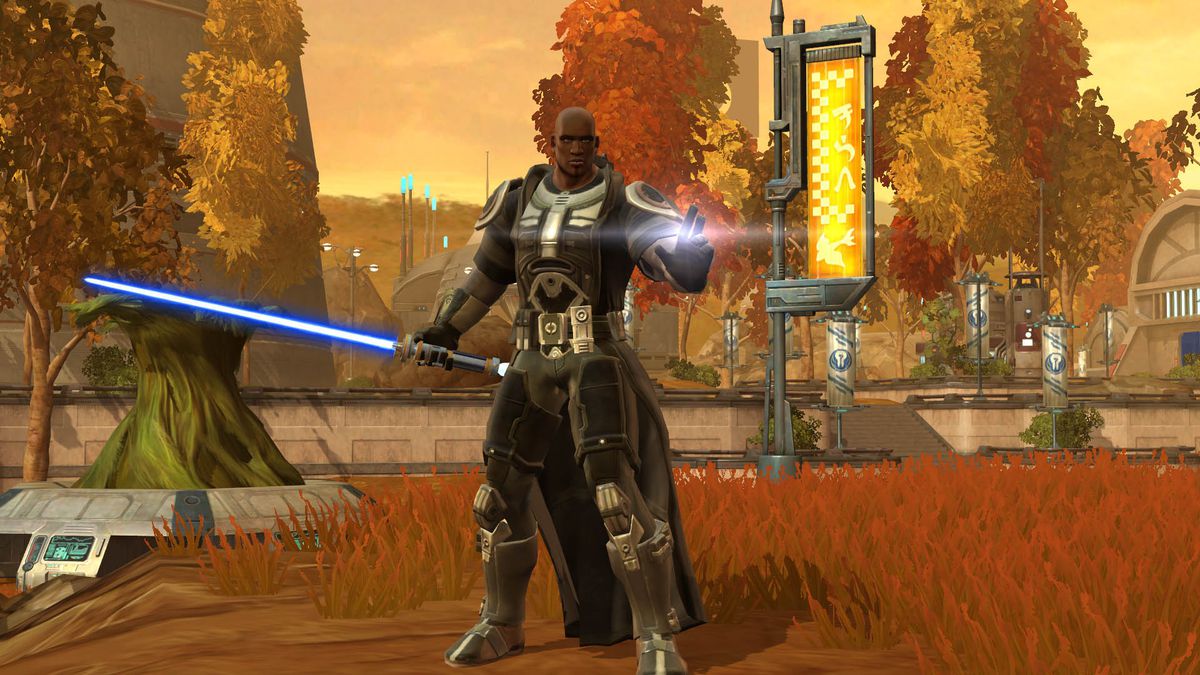 Those are all great selling points by themselves, but The Old Republic really shines once you start playing with friends. The game rolls a virtual die to see who gets to respond and make a decision for each branching path. My husband and I share an equal amount of screen time as we talk to NPCs and explore the world.

But sometimes things go hilariously wrong. My friends and I were once working our way through a dungeon — or a spaceship, rather — as a set of Sith. We encountered the Imperial crew of the ship, begging for mercy after their failure. My Light Side friends decided to let them off the hook.

I was the sole Dark Side dissenter. My entire crew howled as I disemboweled the poor Imperial character with a lightsaber and demanded complete obedience from the survivors.

That’s a moment that I found more memorable than any of the antagonists I faced in Anthem, and letting players take part in each other’s decisions throughout The Old Republic made the story seem so much more collaborative. 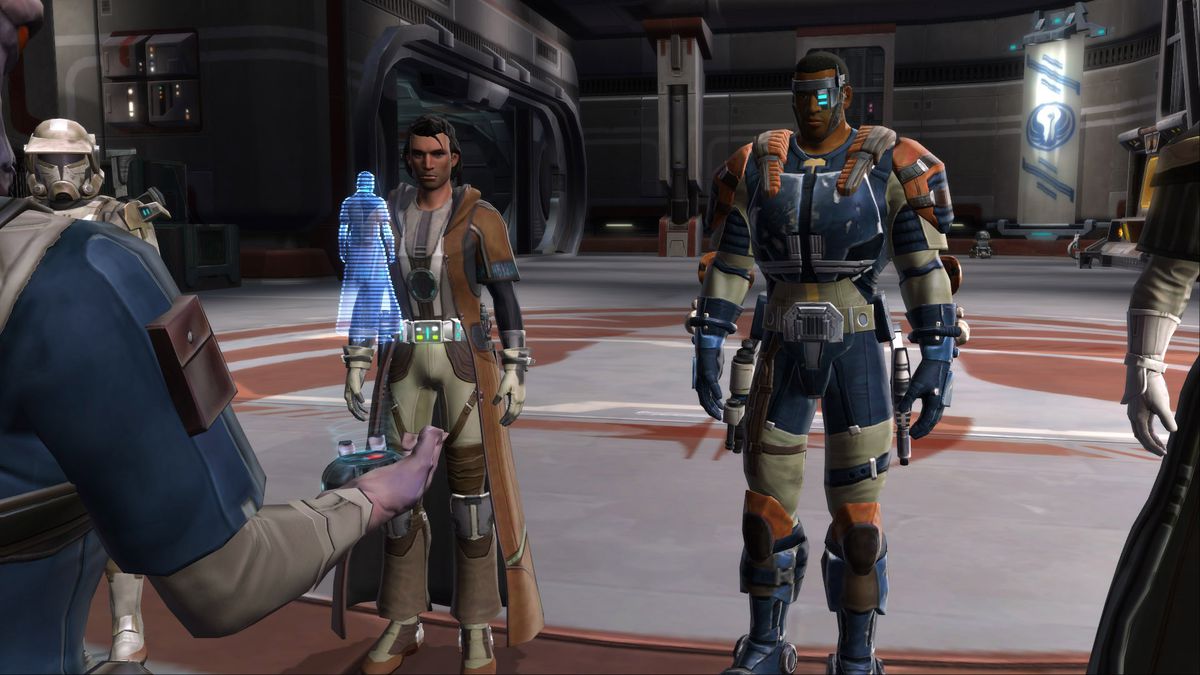 Every class in the game can go either Light Side or Dark Side, although context changes what exactly that means. A Dark Side Smuggler is someone who’s interested in profit and selfish gains, while a Dark Side Warrior is a brutal force of murder and oppression throughout the galaxy.

On the flip side, a Light Side Warrior is someone who believes in honor in battle and mercy to deserving opponents, while a Light Side Imperial Agent can go so far as becoming a double agent and defecting to the Republic.

Those narrative branches were cool, but the game originally locked progress behind reaching certain Dark or Light Side thresholds. That meant if my Jedi Knight encountered some padawans smooching, I felt pressured to turn them in for punishment, or I’d get Dark Side points for my inaction. Some of the decisions deemed Dark or Light felt arbitrary, and went against the nature of the game. Mass poisoning slaves so they would get an instant death versus leaving them to suffer was considered a Light Side action, while letting one person die to obtain a holocron with medical knowledge that would save thousands of people was Dark Side. It was often a bit of a mess.

Now, players can simply toggle between Dark and Light Side at will, and progression is no longer gated behind morality thresholds that force you to hoard specific actions to gain points and move ahed. This means that you can actually roleplay the story.

At launch I would stress over Light decisions on my Inquisitor or Dark choices on my Knight. Now, I can play a nuanced character who reacts differently to each situation, and doing so becomes even more enjoyable when you play with others, because you may share some values but clash over others. It’s also worth noting that your friends cannot influence your class story, meaning that the key moments that I was most invested in weren’t at risk of a friend interrupting. It’s a good balance of order and chaos. 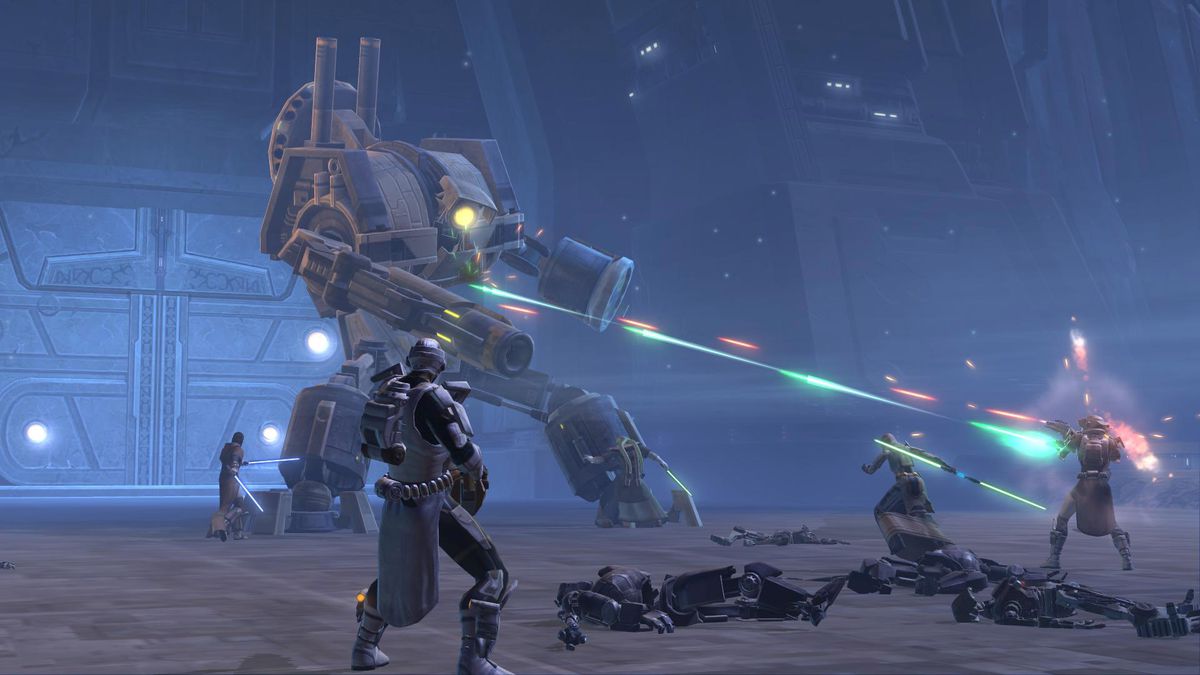 Anthem and The Old Republic are both half of a formula. Anthem definitely nails the feeling of raining missiles down on a foe or summoning the elements and unleashing them on a beast … but the world itself feels empty, the characters are dull, and I felt my eyes glaze over at the dialogue.

Why the combat in Anthem feels so damn good

The Old Republic offers some companions and moral choices that belong in the BioWare Hall of Fame, as well as a robust and cooperative conversation system. The combat is dull, sure, but that’s a price I’m willing to pay for an experience I haven’t been able to find anywhere else. If you’re missing the BioWare magic and have yet to play The Old Republic, you’re missing out on the sort of game that likely made you fall in love with BioWare to begin with.

Much of BioWare Austin have moved on to work on Anthem, which cheers me up considerably. They’ve proven they can turn a game around and add good story-based content. I hope they can pull that trick off again, because The Old Republic has slowly and somewhat quietly become a modern classic.

Call Of Duty: Modern Warfare/Warzone Season 3 Update Is Out Now; File Size Is Smaller This Time