Auto battlers like Auto Chess aren’t very social games. When you’re not watching your units battle, you’re trying to think of your next strategy. And even when each battle starts, the game is only ever about you and your current opponent — not the six other players building their own armies.

But Riot’s take on auto battlers, Teamfight Tactics — a stand-alone mode in League of Legends — keeps the core strategy intact while making the genre fun to play with friends.

What is an auto battler?

Auto battler games like Teamfight Tactics are eight-player battles with chess pieces. In Teamfight Tactics, the pieces and game board are League of Legends-themed. Players buy units with in-game gold, place them on a hexagonal board, and watch them autonomously battle against enemy players.

As the game goes on, players can buy better units from a shared unit pool, place more units by leveling up, and upgrade existing units. Losing a round means you lose health, and winning means you deal damage. The last player standing wins.

Why are auto battler games so hard to play with friends?

Getting into a match of Dota Auto Chess with a friend is easy, but playing with them is boring. You can’t discuss the match without ruining your strategy. Like drawing cards in Hearthstone, your longterm plans need to remain a secret if you don’t want your friends countering your strategy.

Because the matches are free-for-all and battles take place one at a time, your closest friends aren’t always your enemy. But they will be eventually. You don’t fight them enough to talk smack, but you can’t bounce strategic ideas off them either.

This wouldn’t matter much if it weren’t for the genre’s worst feature: Battles are against clones of the other player’s army, not the human players themselves. Each battles simulates a fight between your army and a random enemy player.

If I were to play a game with my co-worker Austen, it’s possible that I could fight his army while he’s fighting someone else’s army. It’s impossible to have shared experiences with friends in game. Everyone is watching their own match taking place at different times.

How is Teamfight Tactics different? 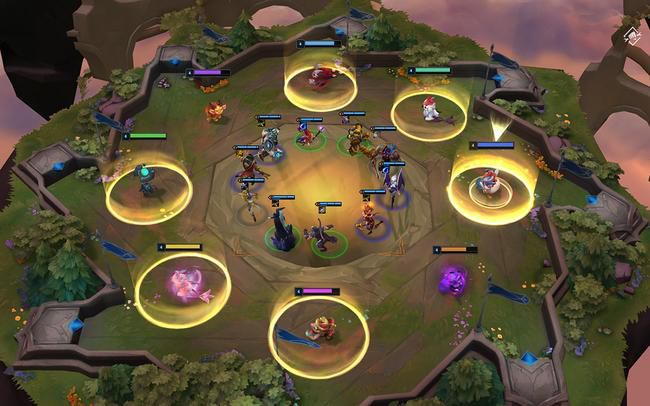 Teamfight Tactics fixes the player-versus-clone issue with a simple change: Players always fight head-to-head. If Austen and I play a match in Teamfight Tactics, we’re seeing the same thing. When his Veigar destroys my Vayne, I can yell about it and he knows exactly what I’m talking about. If I win a round and knock him out of the match, I can apologize and he understands why.

Before Teamfight Tactics, Austen and I would watch each other play Dota Auto Chess through a Discord stream. It was more fun to work through the match cooperatively over Discord than it was to be in the same game, fighting copies of each other’s armies.

Going head to head with a friend in the final round of Teamfight Tactics is more fun than watching Auto Chess ever was. Both players have skin in the game, and everyone is watching the battle unfold in real time.

Every player spawns into a neutral area of the game board. 10 random units spin in a circle, and players get to choose whichever one they want. But once a player claims a unit, other players can’t pick it up. It’s a free-for-all race to see who gets what.

In Teamfight Tactics, every player is looking for a specific unit or item to make their units more powerful, frequently the same one. Playing with friends almost always results in a lot of screaming and swearing during each Carousel. Even if you’re not trying to be a jerk, you’re probably hindering a friend if you’re trying to win.

January 2020 Xbox One Games With Gold: Last Chance For These 2 Games