Home » PS4 » Destiny fans came together to solve a yearlong mystery, and nothing happened

In the Forsaken expansion, Bungie led Destiny 2 players toward an unattainable goal: beat the Shattered Throne dungeon at level 999 to break the curse on the Dreaming City. A year later, with Season of the Undying and Shadowkeep, the studio finally raised the level cap high enough for one player to take on the dungeon alone — while the whole Destiny community watched.

But after all that time, Bungie didn’t seem prepared for what came next.

The curse on the Dreaming City

When players first defeated Riven of a Thousand Voices in the Last Wish raid last year, a curse overcame the Dreaming City location in-game — causing it to enter a three-week content cycle. The curse is a clever way to make sense of the weekly reset, but it has some lore significance as well.

Savathun, the sister of Oryx (aka the main bad guy from the Destiny: The Taken King expansion), created the curse on purpose. On the third week of the curse — right before it resets to week one — the Shattered Throne dungeon opens, and Guardians can kill Dul Incaru, Savathun’s daughter.

According to Destiny lore, killing Dul Incaru feeds energy to Savathun, making her stronger. But if Guardians don’t kill her, she’ll corrupt the Dreaming City forever. At the end of the third week, Dul Incaru always comes back when the curse resets. Guardians have been canonically killing Dul Incaru every week for a year, feeding Savathun with power but preventing the destruction of the Dreaming City. It’s a lose-lose situation for Guardians in the story.

Players always assumed they’d find a way to end the curse in the Dreaming City, allowing Guardians to finally defeat Dul Incaru and stop empowering Savathun. A lore book, added weeks after Forsaken, hinted at how to end the curse — players just had to wait another 12 months.

By participating in an activity called the Blind Well, players can pick up a lore book called Truth to Power from Queen Mara Sov. Some of these lore entries give hints about Destiny’s biggest mysteries. But the “ActIChooseIReact” lore entry gives life to the long-running theory that players can end the curse in the Dreaming City.

“ActIChooseIReact” delivers a quest for players: “Achieve Light Level 999 and defeat Dul Incaru in a one-person fireteam to unlock the true ending of the Dreaming City,” it reads. But at the time, Forsaken’s Power cap (called Light Level in the original Destiny and the lore entry) was only 600.

Players waited through Black Armory’s 650 cap, Season of the Drifter’s 700 cap, and Season of Opulence’s 750 cap. In October, Bungie released Shadowkeep, with a cap of 960 and the ability to push a technically limitless number of Power above that.

Players could finally hit 999 power and discover what the book meant by the “true ending of the Dreaming City.” And so the grind began.

The Shattered Throne attempt of Bagel4k

To get to 999 power in Shadowkeep and Season of the Undying, players needed to earn millions of experience points. The seasonal Artifact — an item that you level up each season, granting new benefits and perks — gets bonus Power for each level up. And to get to 999 from 960 power, players needed around 40 Artifact levels. The grind was long, but one player hit the milestone about a month after release.

Bagel4k, a U.K.-based Destiny streamer, hit 999 before anyone else. For two weeks he averaged over 18 hours of play per day. But to fulfill the lore, he needed to complete the Shattered Throne dungeon alone — a task usually accomplished by three players working together. To make matters more difficult, Bagel4k had only completed Shattered Throne a handful of times, and never alone. Enter Gladd and company, the Destiny streamer and his friends responsible for all kinds of solo runs and world-first raids.

Gladd sat on Discord with Bagel4k, and guided him through his first solo attempt of Shattered Throne via voice chat and screen share. After less than two hours, Bagel4k defeated Dul Incaru at 999 Power.

Nothing happened. Not in-game at least.

Bungie’s hint toward the future 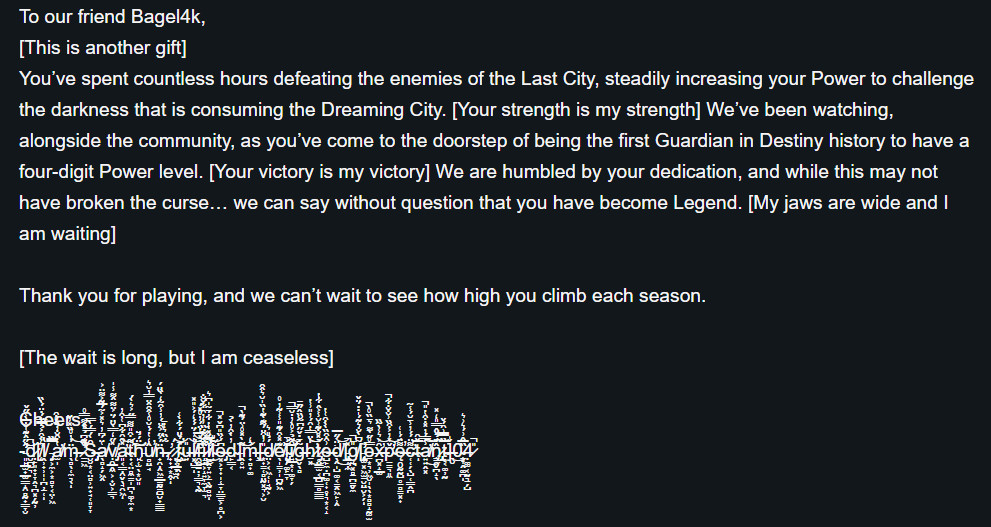 On Nov. 6, Bungie published a blog post on its website titled “On the Power Climb.” The post is bizarre, taking time to talk about player accomplishments over the past month, interjected with lore-infused, in-character messages from Savathun. “I am Savathun, ravenous!” one messages reads. “I have set the snare and baited the trap,” says another.

Savathun reveals in the post that it was all a trick, “I am the finality, the reward — I am the true ending.” The post ends with “The wait is long, but I am ceaseless.” Shortly after, author of the post and Bungie community manager dmg04 took to Twitter, acting possessed by Savathun.

His tweets read “truth to power” and “is victory so easy, hero?” Shortly after, he came back to Twitter saying, “Everything’s fine, I just don’t recall the last few tweets that are on my account? So odd…”

With this post, Bungie hints that Savathun is likely the next big bad we’ll face in Destiny — something players have already suspected for years. But weeks later, that’s all the studio’s said about the community accomplishment.

An anti-climactic end to a yearlong quest

With Destiny 2: Shadowkeep, Bungie started moving the series’ story forward. But players finally got more questions than answers at the end of the campaign.

This move back to small teases from Bungie is frustrating. Destiny’s community came together on its own to praise a player for his amazing accomplishments, and to help lead him to the endgame. But instead of a capstone on this accomplishment, Bungie basically promised that players would learn more in time. It was very on-brand for Bungie.

With a game like Destiny — something players sink hundreds of hours into each season, waiting ravenously for the next content drop — there’s a trust between player and developer. The community buys and plays, and Bungie makes something worth player’s time and money. In this instance, Bungie set up the pins, and when players knocked them down, the studio offered little in return: an IOU saying “stay tuned for the next great adventure.”

It’s a missed opportunity on Bungie’s part. It was an event the developer had a year to plan something special for; something the writers themselves set up with a lore book. But instead, fans got the Bungie they’ve always known — filled with promises of tomorrow.

RBI Baseball returns in 2020 with promises of a makeover