Home » PS4 » Playing Days Gone? You’ll have to make the best of it.

sDespite my heartfelt, middle-age crisis hopes and pleadings, Days Gone is only nominally a biker-gang fantasy. But I kind of knew that it would be. About 15 hours into the game — and I can’t tell how much of it I’ve actually played because I’m being very, almost Sniper Elite levels of cautious and deliberate in my combat — I haven’t even heard much biker jargon. Near as I can tell, my only brother here is a robust, walking comic book named Boozer, and I spend most of my time fetching shit to make him heal up. My bike also sucks pretty bad.

The motorcycle club angle is just a narrative glossing for what is, as many others have pointed out, a rather bog-standard, open-world stealth adventure game. It’s so thinly addressed and presented that it can’t possibly justify Days Gone’s presence among multi-platform franchises that have, over the years in which this game has been under some stage of development, delivered deeper and more engaging canons. There’s nothing in this take on post-apocalyptica that looks or plays differently.

That doesn’t mean Days Gone is worthless or bland; the aforesaid Sniper Elite isn’t, not for me at least. But that series, also, is not for everyone. When I’m given time to be patient, I’ll play anything for hours without complaint. If being a long play and expecting patience is Days Gone’s biggest fault, well, there are worse charges to plead guilty.

But only gently, and politely, has Days Gone grabbed me. If it has claws, it hasn’t sunk them in. It would if Sony’s Bend Studio approached Deacon St. John’s biker past with more irony and humor (a la Grand Theft Auto) or, if the developers opted for the serious treatment, threaded that lifestyle’s unique activities more into Deacon’s roles as muscle, procurer and protector. As it is, with his wife already or assumed to be dead, I’m not cognizant of what his overall motivation is or should be, much less how he stands apart from [goes down the list of current characters I am managing] Kassandra, Karl Fairburne, or my toon in Fallout 76. All of them have a purpose clearer than Deac’s. 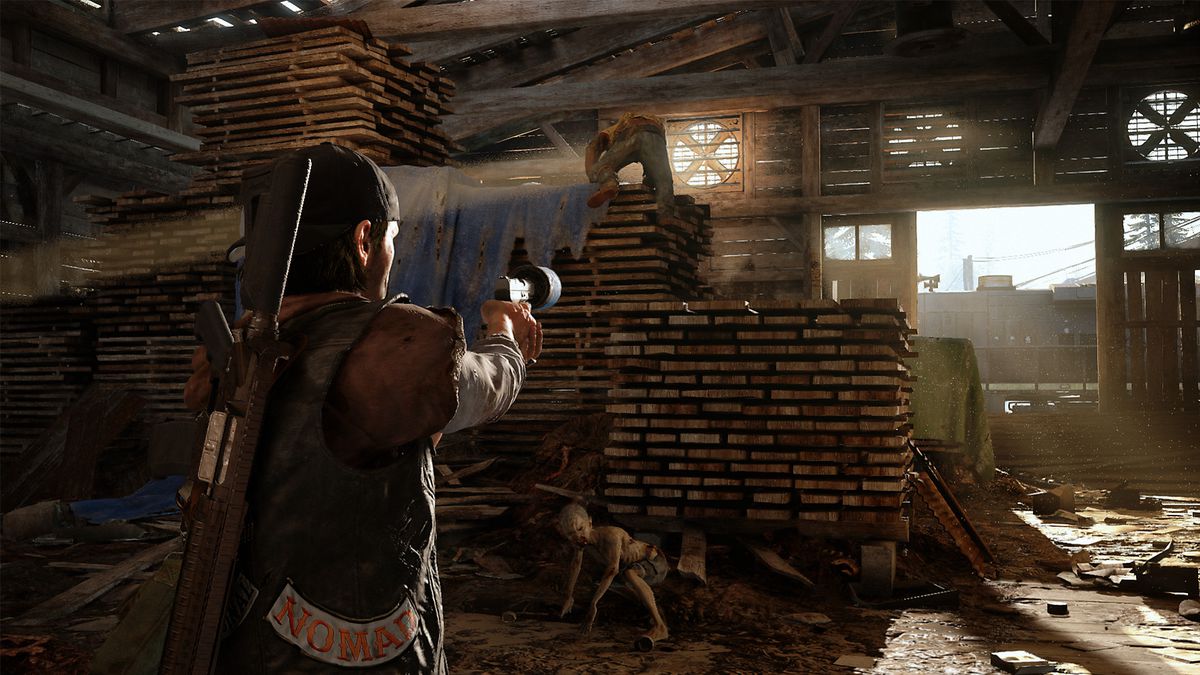 There are subtle hints that Deacon might be uncovering how everyone turned into Newts, Swarmers and Freakers, enough that I’m holding out hope that it might hook into themes about the opioid crisis and rural despair, which I’ve seen up close (and also in Oregon, where I lived a decade ago). But Days Gone’s development history is so long, any timely themes in its vision of societal collapse are likely retroactively applied, and then probably only by egghead writers like me.

Even if that is the narrative payoff here, anyone playing Days Gone must be willing to be thorough and deliberate, because Deacon’s world is repetitive tasks piled upon repetitive tasks. Going anywhere costs fuel, for example, and that goes for fast travel, too. You can’t just pick up fuel and store it in your inventory as you can crafting supplies for first aid and firebombs. I can appreciate a design that adds another layer to my survivalist planning but the reasonably plentiful fuel drops wind up making this more of a chore rather than anything that alters my best-laid plans (as Freakers, when they’re at their best, often do). It’s just one more thing to tick off or top off before leaving a cleared-out mission area, like remembering to loot ammo.

Days Gone also does something I haven’t really been asked to manage in other zombie titles, and that’s clear out the horde’s spawn generators, a la Gauntlet. The game doesn’t do a great job of communicating this necessity to you at first — that every time you see a nest you need to burn that sucker out. Otherwise, you can’t fast travel to or through the area, and the slavering Freakers will always be there, creating low level problems, at least, when you pass through in real time.

Burning out a Freaker nest means also blasting its fleeing occupants, which of course costs precious ammo, and that’s why I left the nests alone when I saw them in my first several fetch quests. I kept checking back to the map and seeing so much of it covered in darkness that I wondered if this really was an open-world game or if I was just carrying out missions in very large, linear spaces. Dealing with Freakers plays like pest control, but it’s an essential part of map unlocking, in conjunction with destroying the human-run ambush camps. Once I understood that purpose, I was properly on task.

And that’s the thing: I find myself drawn to Days Gone, not because of the biker themes or the beautiful, muddy and memorably rendered Oregon Cascades. I like it because who doesn’t like doing things they’re good at, and who cares if it’s the same stuff over and over? I like pitching in MLB The Show 19 after all. And Days Gone does give me all of the tools to creatively dismantle an ambush camp, or kit-bash my own solutions — such as kiting over some Freakers to occupy multiple human adversaries. Showdowns with a bona fide horde of a hundred Freakers are where the game’s blend of action and suspense really shines through. There is no shooting your way out of that. You need to get to a roof and start tossing molotovs. And maybe pray. 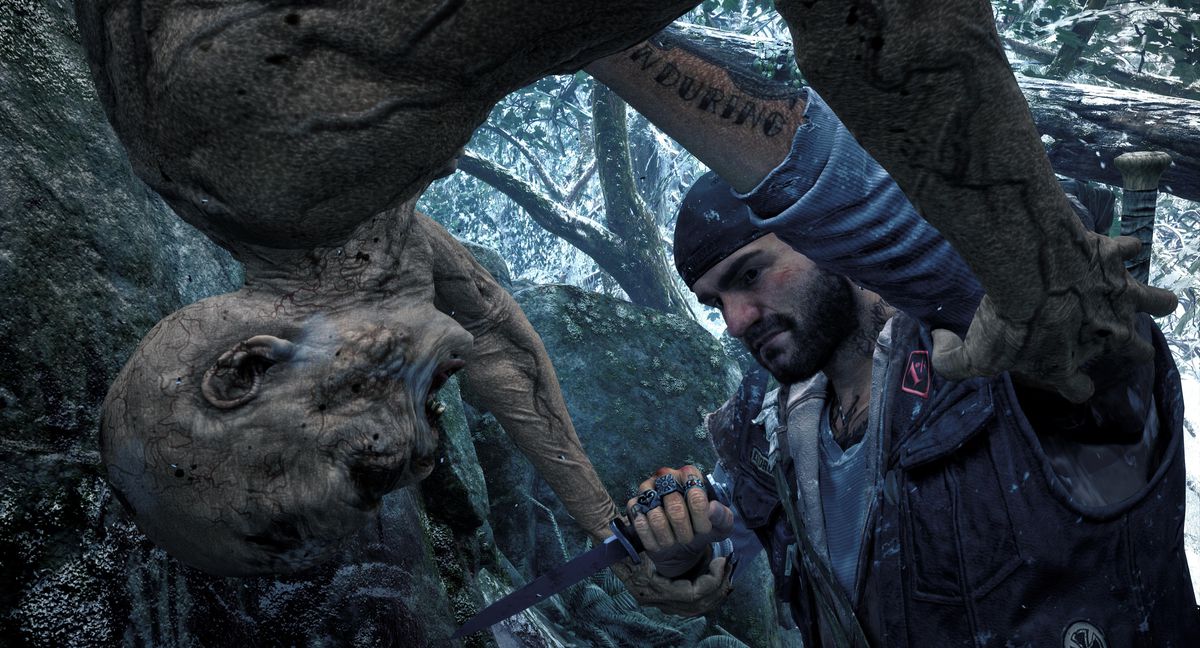 Everyone is so bullet-spongy that non-shotgun gunplay — including lining up a headshot — is almost never a first resort, especially in light of the ammo rationing the game requires. That’s fine; stealth melee, traps and the planning that both require are where this game pays off. Melee combat could use a lock-on mechanism, because it’s easy to end up staring at the sky when you get surprise-flanked or attacked from behind. Once I internalized the flicks left and right on the right stick to transition among two or more foes, melee became manageable, if not tight, without locking.

Assassin’s Creed, of course, has a melee lock-on (and switches targets with the right thumbstick), and comparisons don’t end there. Assassin’s Creed Odyssey’s mission structures are also cookie-cutter repetitive, and if anything Odyssey doubled the grind that was present in Origins. Every time I boot either game up I feel as though the window of opportunity for ever finishing them closed long ago. Yet no one (least of all me) complained about their pacing the way people are complaining about Days Gone’s agenda, which admittedly plods along like a meeting of the Deschutes County Planning Commission.

I think it’s because the surroundings of Assassin’s Creed, and of Sniper Elite, and even Fallout 76 or MLB The Show, do a lot more to remind me that I am a unique hero living in a fascinating time — whether I’m an Ancient Greek warrior, the guy who single-handedly turns the tide of World War II, or a 6-6 southpaw about to win National League Rookie of the Year. Days Gone may tell me I am an interesting person living in interesting times, but it doesn’t really show me that. This world is called “The Shit,” after all, and Deacon St. John is in it. Like him, it’s up to me to make the best of it. No one else can. No one else did.

Everything we know about Final Fantasy 14: Endwalker