Hi, I’m Kirk McKeand and this is my favourite discourse on the Citadel. The universe is vast and unknowable. According to the Drake equation, there are likely dozens of advanced alien civilizations in the Milky Way alone. Even looking at our own Earth, life teems with variety, from the horrors of the dark deep to the domestic cat curled on your lap.

Our reality – which likely isn’t reality at all – supports all kinds of organisms. Imagine how the world looks to a microscopic being. To these small creatures, humans might as well be planets. Perhaps Earth itself is a blood cell inside a giant organism beyond our own comprehension, and we’re some kind of illness that’s perpetually spreading inside of it.

My point is, there’s a lot we don’t understand, and life evolves in myriad ways. Among all those mysteries and organic anomalies, the biggest question of all emerges: why do some people think the first Mass Effect is superior to Mass Effect 2? I’ve gone out of my way to find one of these rare species and nail down how someone can be so wrong. Meet Dave Aubrey, TheGamer’s guides editor. Dave, what is your major malfunction?

Dave: I like RPGs more than cover shooters. Devastating, I know.

Dave: I have to admit, Mass Effect has some bad shooting. But unfortunately, this is the nature of RPG shooters. Your bullets are equivalent to silly magic blasts, doing fixed amounts of health damage instead of ripping opponents wide open with a headshot. Mass Effect’s shooting and, well, everything else, is definitely more raw than the sequels, but it’s also distinctly an RPG. I’m also glad the cover system was basically broken, because that at least made the fights a bit more dynamic.

Kirk: I feel like I need you to explain how limited level design and a broken cover system makes fights more dynamic. I was playing Mass Effect 2’s Tali recruitment mission at the weekend, and it takes place on a planet with a dying sun. You have to dash between bits of shade or the heat melts your shields. There are also different routes through each combat arena, allowing you to position your team to give you cover fire as you flank and hit the geth from the side. It feels like you’re saying you prefer running and gunning. Is that really all it boils down to? I won’t lie, I was expecting a bit more.

Dave: Yes, I absolutely prefer running and gunning, and considering how cover shooters are certainly less common in 2021, I think most people do. And I have to concede that Mass Effect is far less technically competent than its sequels. Moving forward with 2 and 3, the cover system is fixed, and biotic abilities take centre stage. But all of those things take place from behind a chest-high wall, before moving up to another chest-high wall, and so on and so forth. When 50 percent of the screen is taken up by a wall at any one time, it’s hard to marvel at a planet’s dying sun. But away from all of that, what I admire most about the original when compared to its sequels is its story. I can’t argue on behalf of technical competence – that fight was lost a long time ago – but the story of humanity’s debut on the intergalactic stage, the Reapers, and Shepard becoming a Spectre and leader for humanity (regardless of how militarised it may be) is an engaging one – one I actually cared about, unlike Martin Sheen’s malicious adventures. 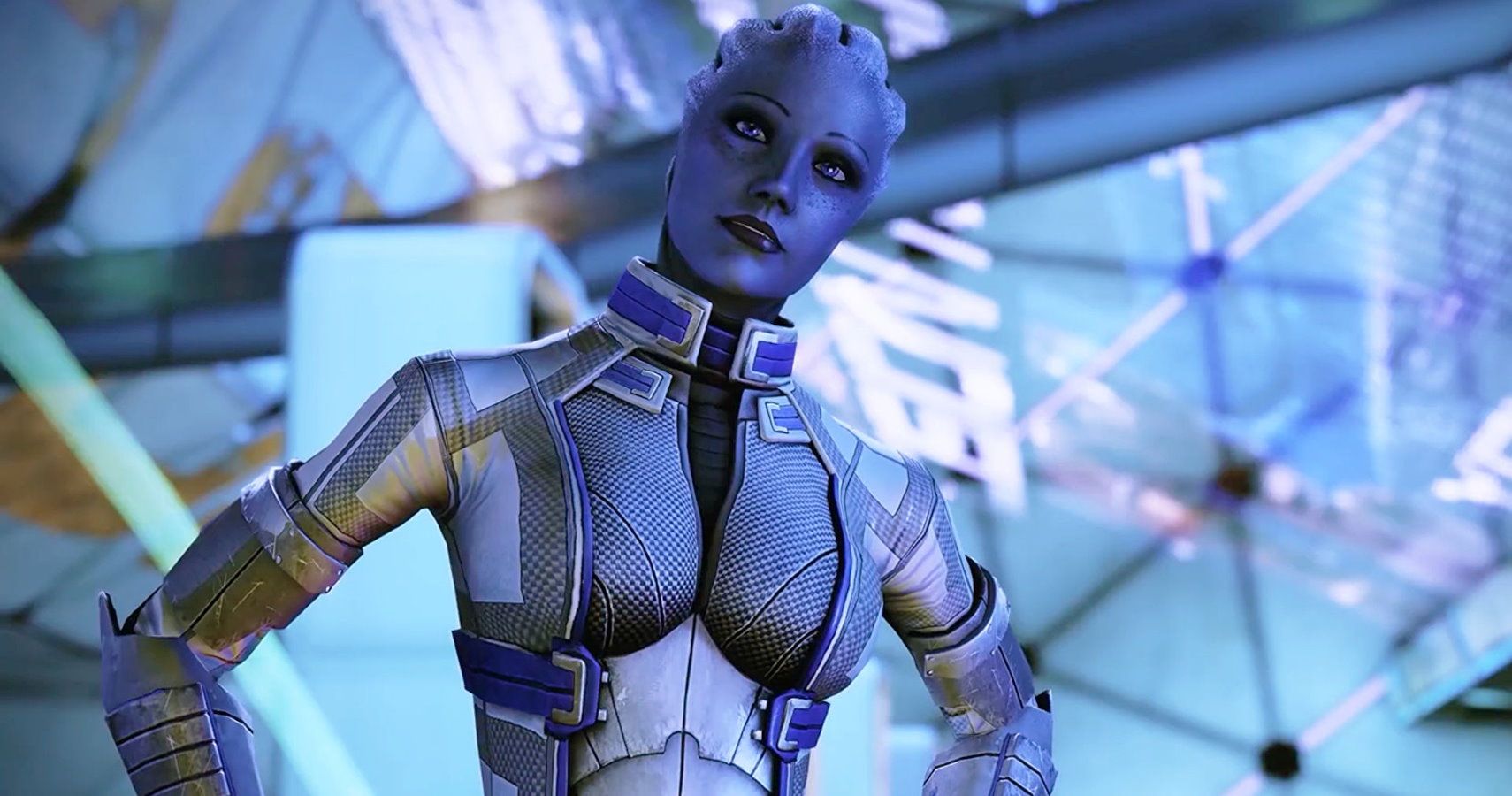 Kirk: You know why biotic powers took centre stage? Because lifting people into the air and yeeting them into the sky is unbelievably good, Dave. You should try it some time. Oh, that’s right, you can’t, because the first Mass Effect made biotic powers feel like firing a water pistol while blindfolded. Anyway, let’s move away from the shooting and talk about the story. I can’t deny that the first Mass Effect is a masterclass in setting up a complex universe. The way they just introduced all those alien species and cultures – amazing! Which part of the story stood out for you, though? I find the plot of the first game severely lacking. The Illusive Man is brilliant as well, by the way. But even the characters in the first game, they’re introduced with so little fanfare and they’re barely fleshed out beyond there. You have one conversation with Liara and then she’s like “I’m not a woman so this isn’t even gay if we bone” and then she’s jumping you in your quarters. Calm down, Liara. There’s barely any character growth. Mass Effect 2 introduces each character with such confidence, selling you on them from the moment you meet, and the loyalty missions add a whole other layer to their personalities. By the end of the game, at which point any of them can die in the suicide mission, you are fully invested in all of them. What part of the first game even holds a candle to all that?

Dave: I don’t like this historical revisionism. We play Mass Effect 2, and then suddenly we all forget why we were so excited for Mass Effect 2. No one played Mass Effect 2 on launch day and said “man I hope this is good, the last one had shite characters and abilities.” Everyone was excited to see Garrus, Liara, Wrex, not Ashley, and the rest. Let’s not pretend that these characters are only interesting or memorable because of the sequel, because we all know that’s a lie. But I also adore the understated introductions of the first. You meet so many of your allies on the Citadel, a neutral space for all races (except the geth, I guess). Garrus is a crooked cop, and no, you don’t meet him as he rebels against C-Sec and blows up buildings, or performs a grandiose escape attempt, because he, and so many of the other characters on the Citadel, are held back by overbearing bureaucracy. You can’t have explosive introductions, instead you have real ones, relationships that start because you began chatting in a supermarket queue, not because you needed to save half of the galaxy together – that comes later. ME introduces its characters with zero pomp and circumstance, all of the importance they have in later games is given to them by the player with a slow burn of endearment. ME2 doesn’t know the meaning of subtlety, unfortunately, whether that’s in altered ass shots or explosive sequences.

Kirk: Who needs subtlety when the game literally opens with your ship being blown apart and you being sucked into space? I totally agree that Mass Effect 2 needs the first game, and it’s not like I think the original game is bad either. I just don’t understand how someone – you – can get to the second game, which is superior mechanically, as a story, and in terms of character development, and go, “Nah, I’m not going to bother finishing this one because I sometimes have to crouch behind cover.” I feel like we’re on a different planet. Your argument seems to be that Mass Effect is Alien and Mass Effect 2 is Aliens, which is completely fair, but Aliens is good for different reasons to the original movie. What was it that made you completely drop off Mass Effect 2 (and don’t tell me it’s because you can yeet people)?

Dave: I actually didn’t drop off Mass Effect 2! I dropped off Mass Effect 3. The second game carried me through to the end, but I didn’t feel like I had earned it, and I didn’t like the conclusion. People argue that Mass Effect’s conclusion is anticlimactic and underwhelming, and I won’t argue with that view, but 2’s left me incredibly sour. After a whole game of building up this tension between the new robot zombie Shepard and Martin Sheen, the final scene just sees Martin Sheen looking kinda mad as Shepard turns his back on him. I want to praise the final suicide mission, but unfortunately it just makes me feel like I’m a fool if I skipped out on any of the optional interactions with characters I didn’t much care for. Every mission concluded, and I would return to the Normandy to systematically check each character’s individual room, just to see if I needed to coddle them a bit before the story moved on and punished me for not visiting them. These aren’t decisions I made because I wanted to make them, they’re decisions I made because I felt like I needed to. By the end of it all, when I didn’t even get to see any conclusion between Shepard and this new antagonist, I was disappointed, but it’s the fact that so much of the story with the Reapers was dropped along the way to focus on the new cast that soured me so much.

Kirk: I see. I think we’ve found the root of the problem here. “The final scene sees Martin Sheen looking kinda mad as Shepard turns his back on him.” You said “his back”. You can’t trust a guy who plays as MaleShep. Good day to you, sir.

You can watch Netflix on Nintendo Switch, but there’s a catch

Carly and the Reaperman Out Now for Oculus Quest

Why Touhou Luna Nights Is A Better Metroidvania Than Bloodstained