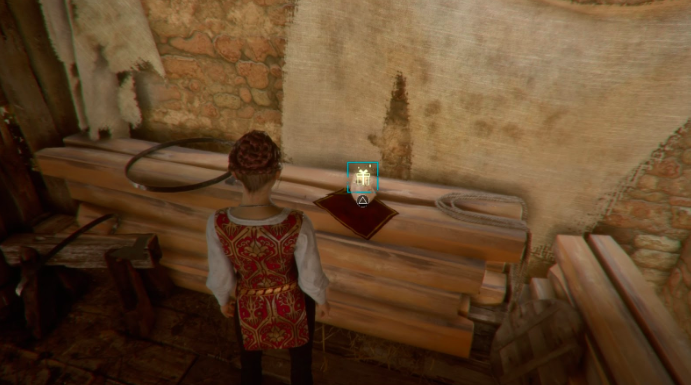 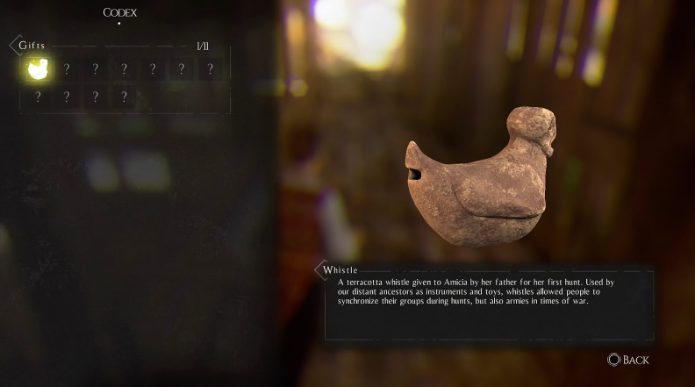 At the very start of Chapter 2, you’ll walk up the road and see an abandoned market area, just in front of the opened gates of the village. Do not enter the market area just yet. Instead, turn right until you see a small dock just beside the lake.

Head on over towards the small dock, and you’ll find an amulet nestled in some old rags. This is the second gift. 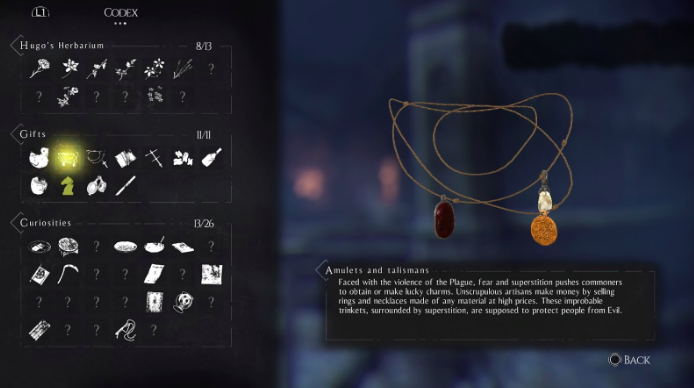 At the very start of the third chapter, Hugo and Amicia will be trapped inside of a monastery. The monastery is fairly big and is full of equipment, but finding the third gift, the Rosary, is simple enough.

Head towards the altar but before you get to it, turn right. There you’ll spot a table to the left, and on that table, you’ll see the beloved Rosary Beads. 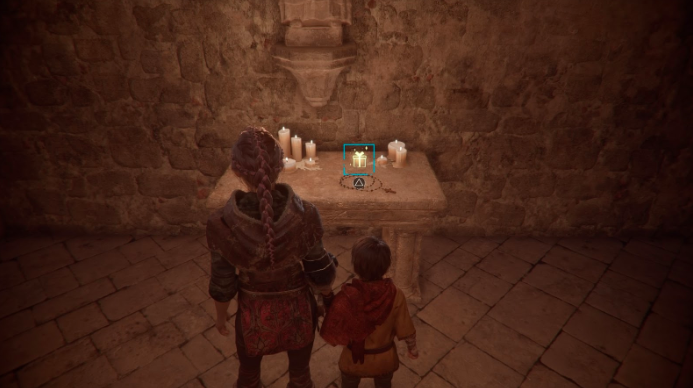 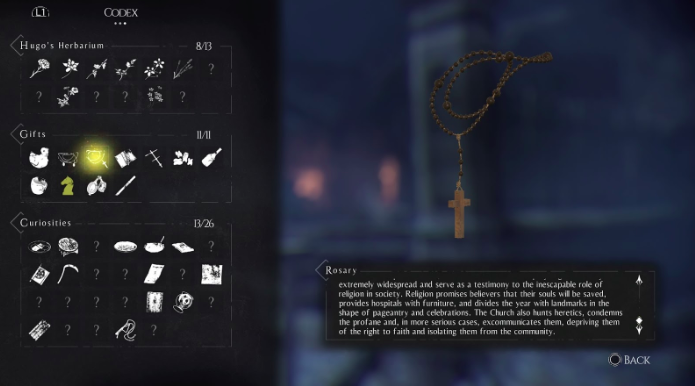 Chapter IV – Diary of an Alchemist

During Chapter 4, you’ll have Hugo runoff into the field and giggle. This is the indication that he’s playing hide-and-seek. After you find him, you should still be in the field. Instead of continuing forward, turn and head east.

Keep heading east until you see a lake and a small boat with a dead man inside. If you don’t see this, you’ve most likely gone too far and need to double back.

Head up to the man and inside of his boat you’ll find the Diary of an Alchemist. 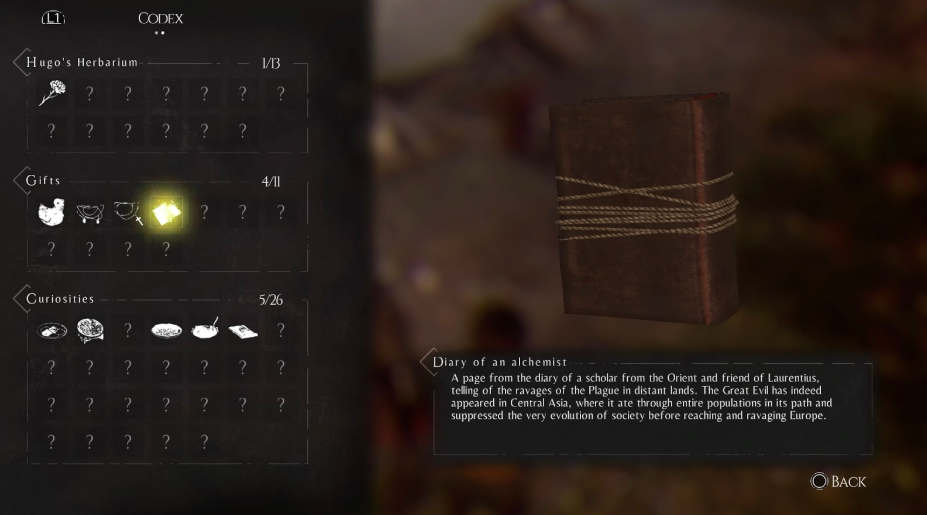 During Chapter 5 you’ll come across various contraptions that you’ll have to light or use in order to get across the battleground of death and rats.

As you continue throughout the game, you’ll come across another contraption where you have to get Lucas to use a lever to swing the fire back and forth for you and Hugo to cross.

Once you get to the other side, light the torch just above the hole in the wall so Hugo can crawl to the other side and get you a stick. Little do you know, this stick is going to save your life.

Light the stick to your right and from there, jump off the wall and into the hoard of rats. But don’t even think of standing around. Instead push forward until you find a sword sticking out from the ground to your right. Light it and besides it you’ll see the Jacob ladder, propped up against the wall. 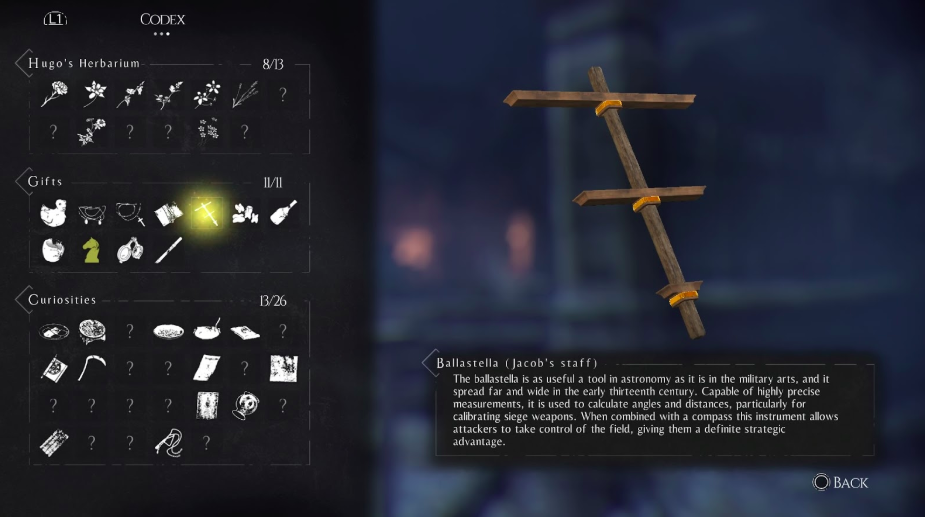 The Knucklebones are also known as dice, and you’ll find them during the time you’re creeping around the British camp with Mellie. This makes it particularly hard to get, as you’ll have no sling to save you if you mess up and get all the guards rushing after you.

Regardless, you’ll find the Knucklebones straight after you make your way through a tent with sleeping men with wine bottles next to them. Be extra careful during this level, as even touching the wine bottles or the men will trigger them to wake up.

For now, let’s just say you navigate your way through the first few men just fine. But before you follow Mellie outside of the tent, turn towards the very first opening on the left. You’ll see a table and on it, the Knucklebones. 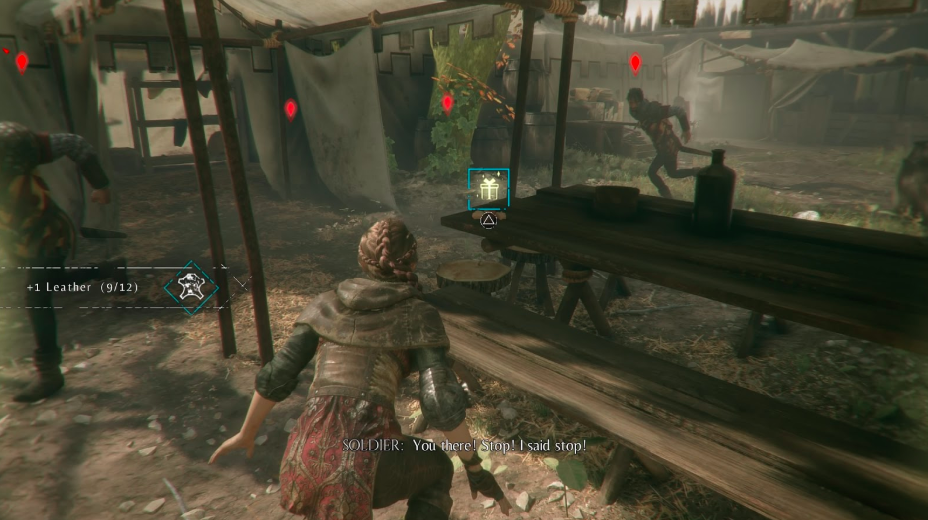 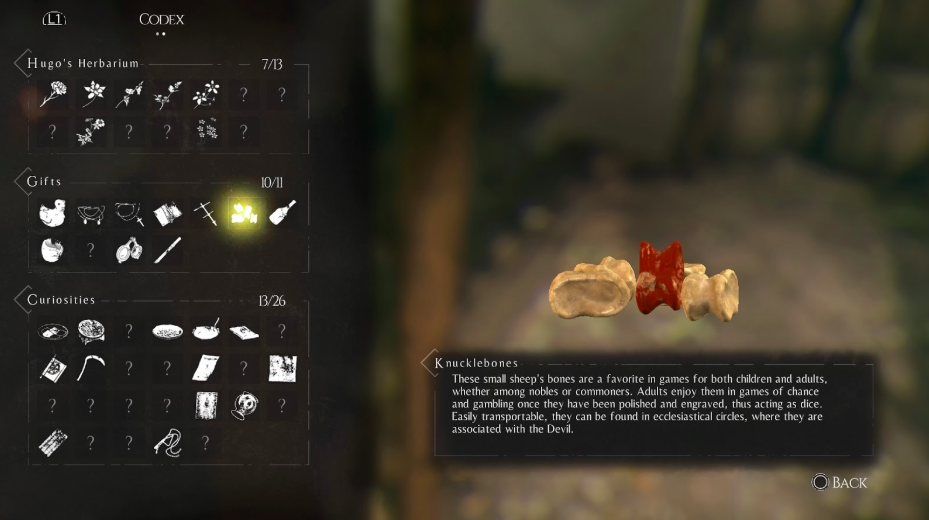 During chapter 7 you’ll come across a scene where you first catch sight of the castle. Amicia, Hugo, Mellie and Lucas will make a comment about the castle, which will let you know you’re on the right track.

After that, you’ll come across rats that dart away when a lightning bolt is heard. Lightning apparently scares these assholes. But instead of rushing on ahead, instead turn back and go up until you come across a door.

Ask Mellie to unlock the door. Once you’ve unlocked it, head inside and you’ll find the Vinegar of the Four Thieves on a desk. 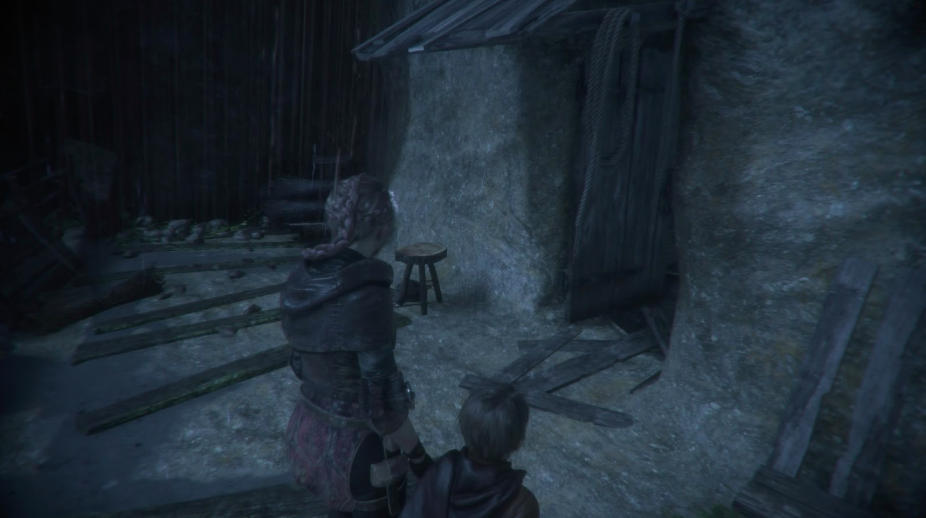 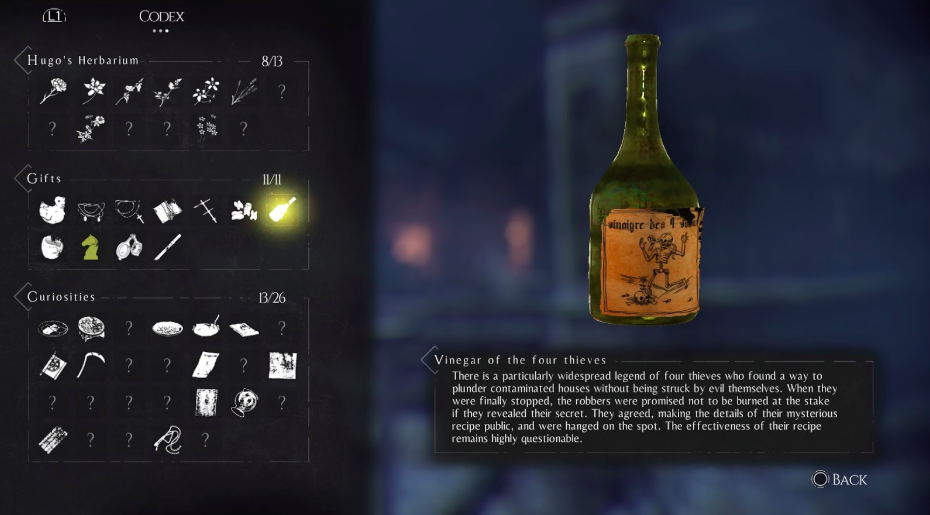 After you wake up during your first night at the castle, you’ll have the option to follow Hugo. Look at him where he is waiting for you, and instead go towards the far right and in through the right passage.

Through the right passage you’ll come across an overgrown part of the castle, but before continuing turn left and you’ll see the alchemical crucible buried in some greenery. 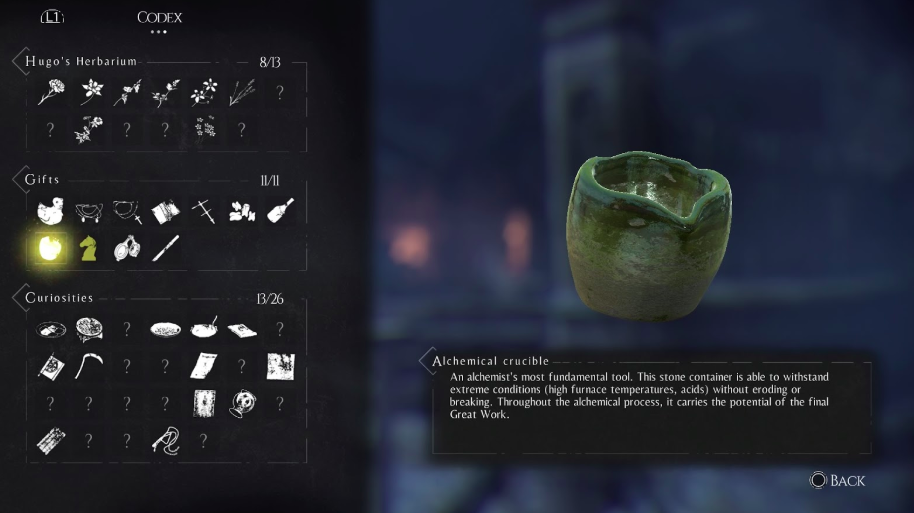 After several attempts and help from a friend, I finally found the only gift in chapter 9. The chess pieces!

You’ll find the chess pieces during the very last part of chapter 9, just before you enter the University. You’ll see the carriage where Vitali just left, and to your right you’ll see two guards who have walked down into another room to the right.

Follow them and deal with them in whichever way you can. Once that’s done, head into the room they were situated in and you’ll see, on the table, the chess pieces. 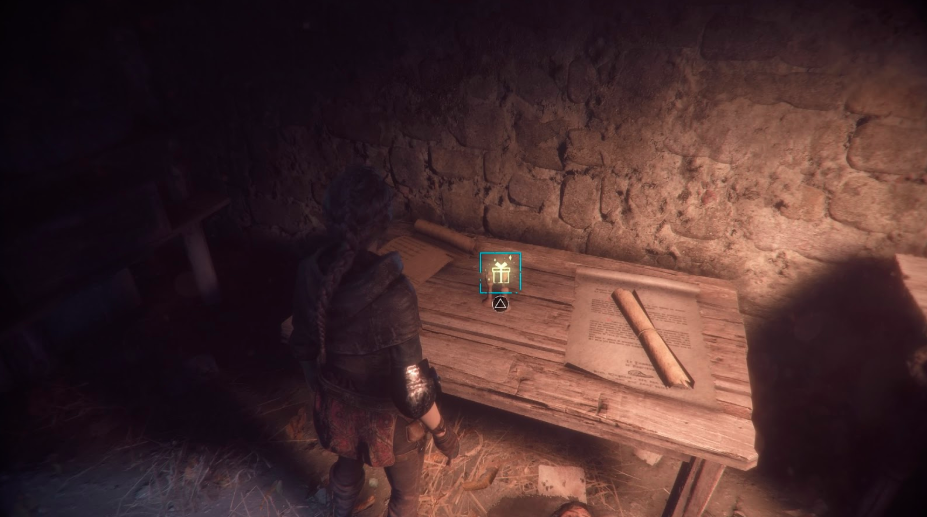 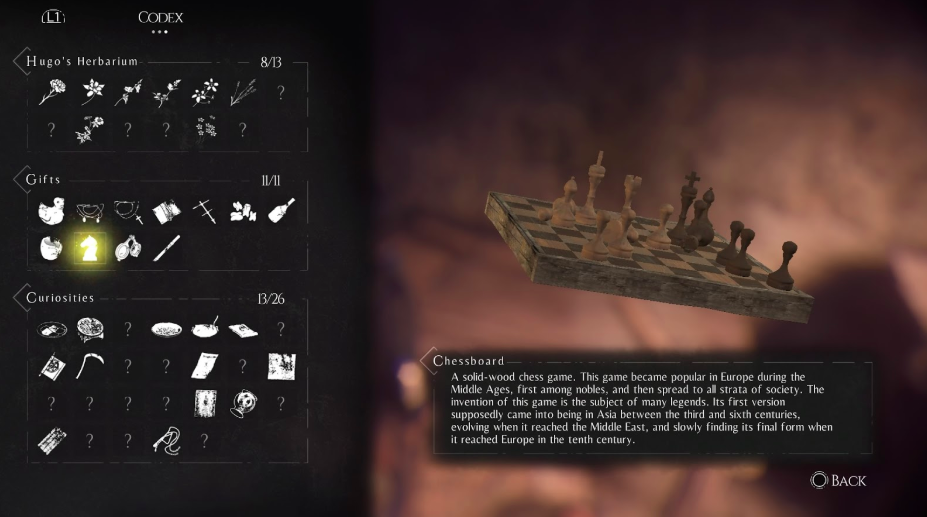 In this chapter, you’ll have to join up with Rodric first. As you go together from room to room, you’ll enter a room that looks to be a library slash research room. In that room, you’ll see two guards.

This is where you’ll hear a guard saying he’s off to find out where trouble is. Once you take out the guard that’s left, turn right and you’ll see a chest which you can open and a table. The stone will be on the table. 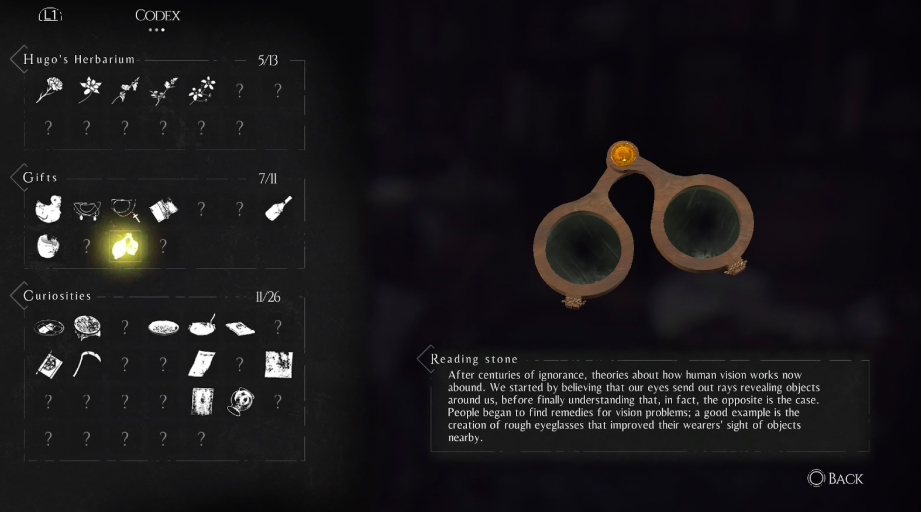 There are no gifts in Chapter 11.

You’ll find this during the quest where Amicia and Lucas have to go back to the family manor. During your time in this chapter, you’ll come across a part where Lucas stands by a door and pretty much says he’ll use the light to help you get through the horde of rats. Ignore him, you’ve got other things to do.

Instead, behind him, you’ll notice a building. A quick look and you’ll see that the building is crawling with rats and need to be lured away in order to get inside. What you’ll need to do is craft Luminosa and throw it inside. This will get rid of the rats and you can rush inside and grab the Mother Reed pen that’s on the desk straight in front of you. 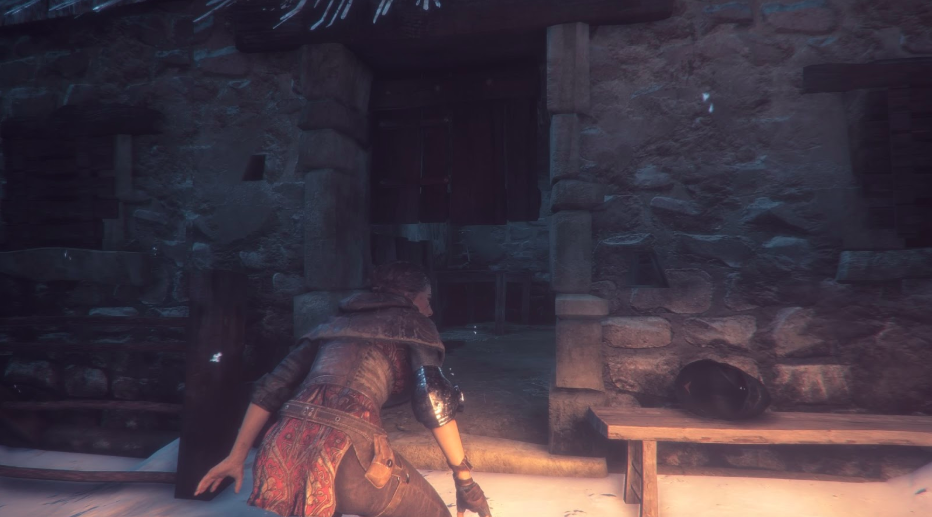 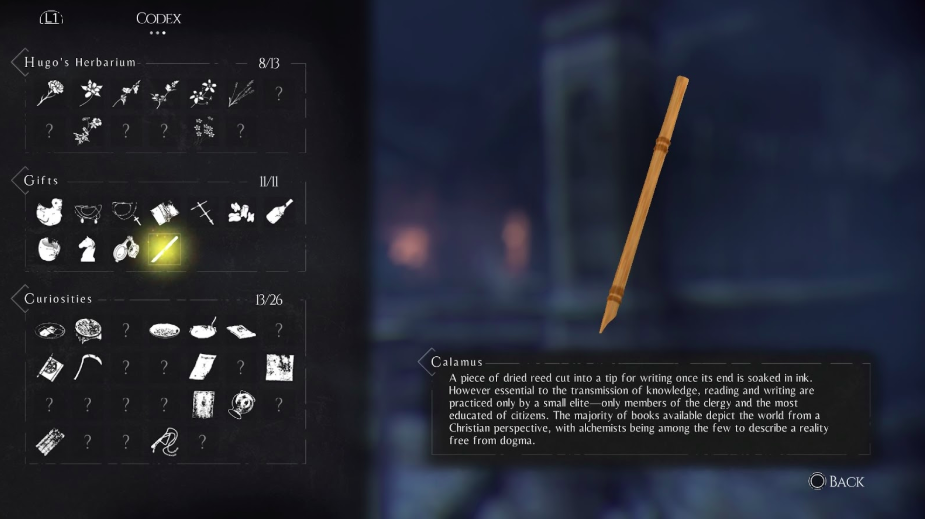 You’ve collected all the gifts! Go celebrate and do that little happy dance when you earn a new trophy/achievement.

The Sound Of Night City: An Exclusive Interview With Cyberpunk 2077’s Composers