Home » Reviews » Blasphemous review: In for a penance, in for a pounding

Reviewing a game that’s so obviously a pastiche has its own dangers.

The easy way out is to define what Blasphemous does by dropping in a series of game names you may already be familiar with, but which often sound like gibberish to the uninitiated.

But it’s worth starting simply: Blasphemous is equal parts Soulsborne game mixed into a healthy helping of Metroidvania. But that doesn’t tell us much about what the game is, or what it does well, especially when the goal seems to focus on showing different facets of suffering, and not on the mechanical act of playing the game itself. This is a game about pain, illustrated in striking detail, to skillfully communicate the shock value that’s inherent in the religious imagery it plays with.

As The Penitent One, I have to take my silent protagonist throughout the far corners of a serpentine map and back. My side-scrolling, 2D quest through ravaged cities and defiled dungeons brings me closer to fulfilling my penance. I’m constantly waylaid by various monsters and massive bosses as I move through each room, hallway and dungeon chamber. In time, I explore several interconnected lands filling out a map that sprawls out in all directions.

The finely crafted pixel art might look reminiscent of the 16-bit action games of yesteryear and with it comes the same crushing difficulty. As I progress, even the simplest of encounters can send me to my death.

Any single screen of Blasphemous can be filled with multiple enemies, attacking at all angles. Despite memorizing their unique attacks and making liberal use of the large window of time to parry and counter attack, one misstep can lead to ruin. Enemy combinations like a creature that burrows below ground nearly unseen only to burst upwards paired with another that unpredictably jumps around and throws bombs can turn a simple path forward into living minefield.

Yet I persisted through Blasphemous, even after dying more times than I care to admit, because each area introduced me to new characters with their own mysteries that I then felt like I had to unravel. That’s the power of the game’s setting and themes. 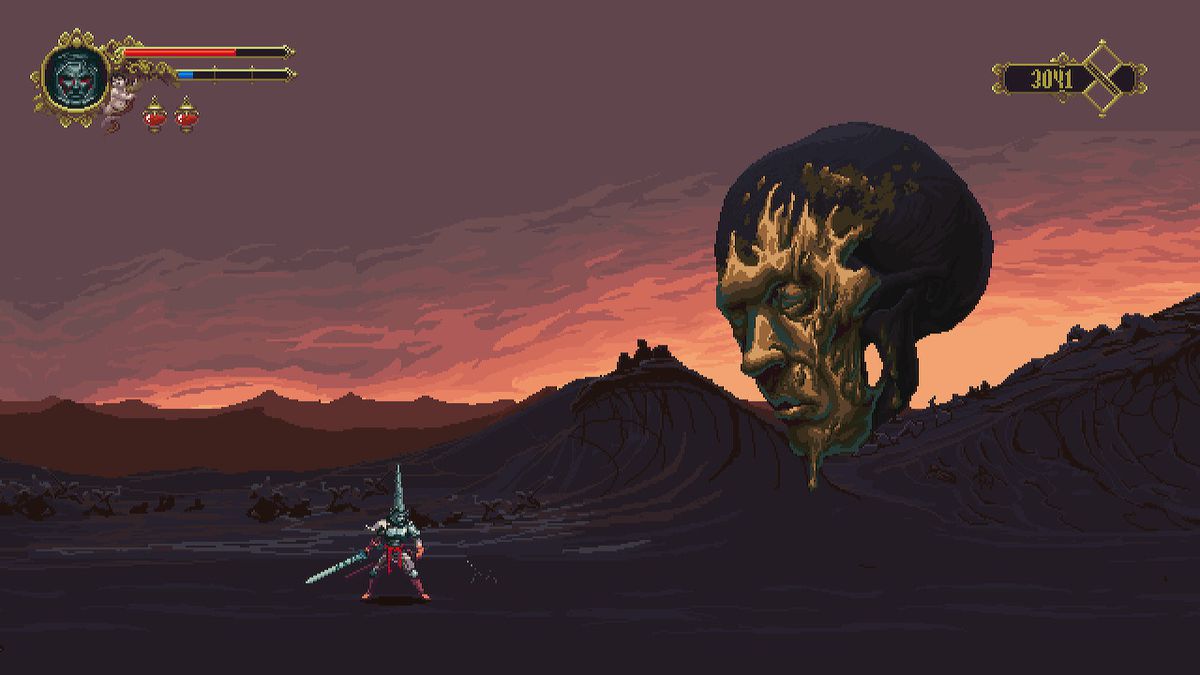 Each character in the game is steeped in dark, religious overtones and are designed based on the penance they are serving. All of their appearances create questions in my mind I need immediate answers to. Consider my character, The Penitent One. I’m introduced to him lying amid a mountain of corpses that look similar to his.

Like the others, he sports a massive, cone-shaped helmet, except he has a suit of armor on. After I learn the basics of movement, I immediately fight a massive, hulking boss. Once defeated, my character proceeds to drain the blood from the enemy’s body, emptying it into his helmet. He then puts that blood-filled helmet back on, drenching himself. Where in the world did The Penitent come from and why did he just do that? I have to know.

After that battle I encounter Deogracias, a friendly character whose penance consists of being forced to witness and recount my adventure. He appears throughout the game to give me hints, although they are often so entangled with mysterious terms and unfamiliar character names it’s hard to understand what I actually need to do.

No matter where I find him, he greets me in a pose he has no choice but to maintain: his arms are bound with rope in such a way that all he can do is hold up a scroll detailing my comings and goings. What did he do to deserve this fate? I have to find out. This is the sort of detail that keeps me going. 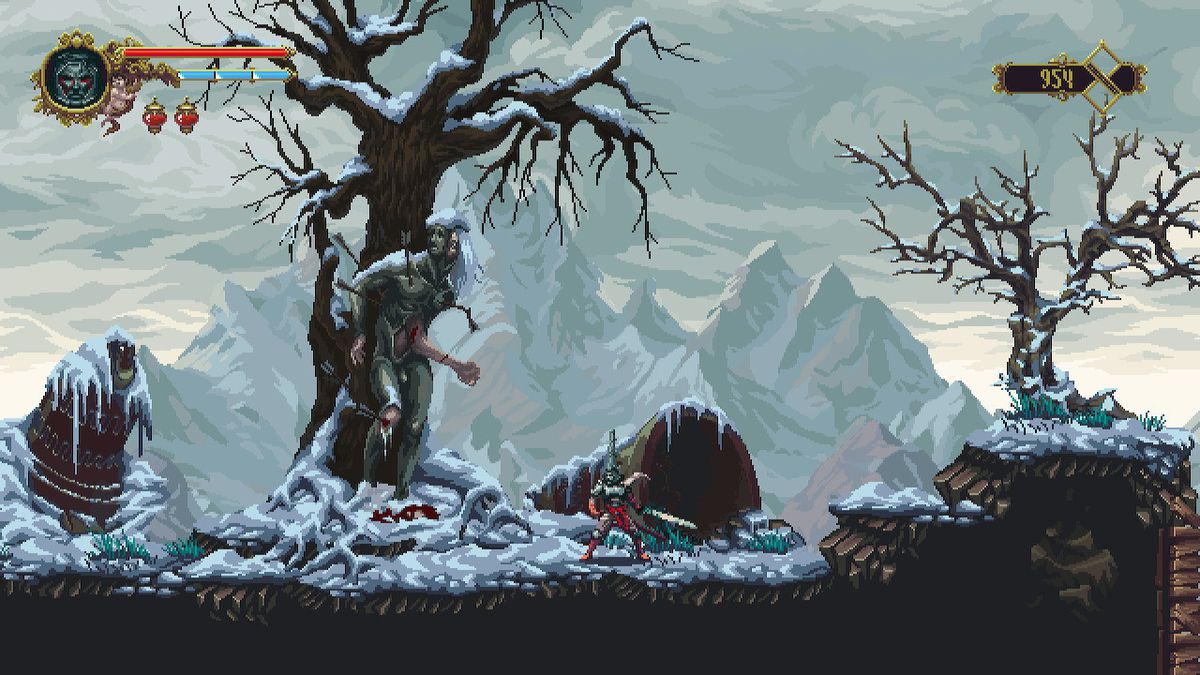 Gémino is another poor soul I meet, a man encased in iron with only one free arm and eye exposed to the elements. Despite his circumstances, he seems to be luxuriating in his penance and asks me to help him feel more pain. I can’t begin to understand how his story got him to where he is when I cross his path, but I’ll keep playing to discover why. Maybe the game will never reveal what happened to these people, and who controls their fate, but the idea of all these characters enduring these creative punishments sends my mind reeling. I haven’t wondered so much about a game’s backstory based on its tone and presentation in a long while.

The lingering mysteries of Blasphemous even exist in the items I acquire. They all come with their own lore, further expanding the twisted world I find myself in. My magical attacks take the form of prayers that unleash powerful spells or combat boosts. Items I use to upgrade my character’s abilities are trinkets rich with their own backstories that fill my entire screen with text. There are even several collectibles that tell small and tragic stories of other denizens of my world. Every corner of Blasphemous is filled with a certain darkness, of a sense of judgment and unseen supervision, even my items menu. 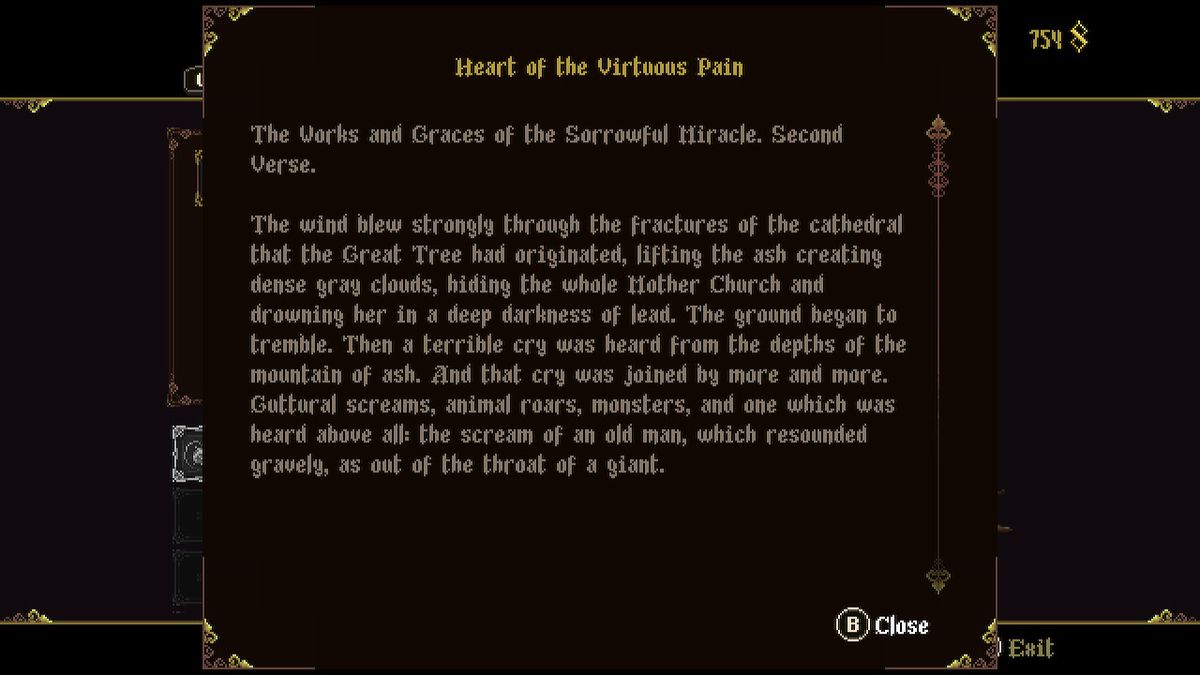 Getting the opportunity to unearth all these tales does require a bit of tedium. Blasphemous has its fair share of backtracking, which requires me to run through the same enemy-filled areas over and over again.

At first, a new enemy encounter can be thrilling. Each design goes beyond the simple ghost and goblins I might find in another side-scroller. The enemies themselves seem to share some sort of brutal religious fate that they must also carry out. Many of the foes I face look like evil pastors or haunted religious symbols come to life.

I just wish the game had a bestiary that explored their history further. If I had more backstory on these villains, it would be less frustrating having to encounter them time and time again when I inevitably die, respawn at the last checkpoint and do my best to press past the area I lost my life at. When I have to backtrack through a previously explored area again and again, it feels like jogging through a haunted house attraction I’ve been through dozens of times before. Without more depth the character design can sometimes seem like more of a metal album cover than any kind of actual commentary on, well, anything. 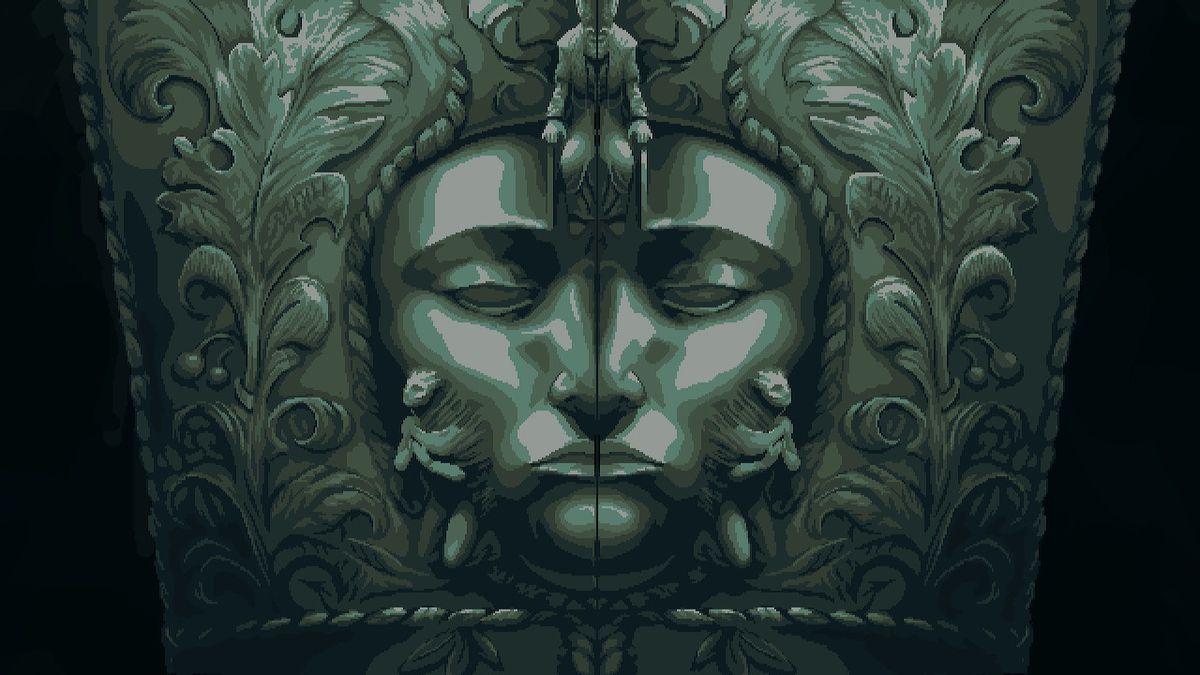 Despite these annoyances, I couldn’t help but subject myself to the brutality of Blasphemous. It’s been a while since I have been so wrapped up in the lore behind a game, especially in a genre that rarely surprises me anymore. Everything about the game is dripping with a gruesome, macabre atmosphere that pulls at a darker side of me that can’t help but be captivated.

This is religious iconography and pointed suffering that feels more guided and tempered than what you normally see in games that play with these images; somehow Blasphemous manages to feel like a functional video game and not like something I’d see airbrushed on the side of a van.

Blasphemous is unforgiving, brutal, and at times, unfair. Beneath the drudgery is a compelling and dark tale waiting to be uncovered. If you are willing to endure its frustrations, you’ll be rewarded with grim and spectacular visuals that’ll be forever burned into your mind, and an equally twisted story to match them.

Blasphemous was released on Sept. 10 on Nintendo Switch, PlayStation 4, Windows PC, and Xbox One. The game was reviewed on PC using a “final” retail code provided by The Game Kitchen. You can find additional information about Polygon’s ethics policy here.

Theory: Pokémon Sword & Shield’s Allister Got His Mask From A Galarian Corsola

Halo: Infinite Will FAIL Without A Battle Royale Mode