That’s what my dwarf said the first time I killed a loot bug. Knowing my character regretted this act of cruelty didn’t make me pause from taking a pickaxe to every loot bug I came across, of course. But it did start me on the path to becoming deeply invested in Deep Rock Galactic.

Deep Rock Galactic has been out of early access (where it was for about two years) for just a few months now and has a dedicated fan base. It’s a bit Minecraft and a lot Left 4 Dead; each mission sees one to four dwarven miners harvesting minerals, collecting eggs, or exploding alien megafauna in the caves of rocky planet Hoxxes IV. Take gold back to your home base to exchange for credits; other minerals are valuable for crafting upgrades to your character. Try not to get eaten by a swarm of alien arthropods in the process of extracting everything you (and your robot buddy) can carry.

Compared to Left 4 Dead, with which it shares a lot of mechanical DNA, Deep Rock Galactic doesn’t differentiate its character classes with any personality; they all shout the same things, pretty much, with slightly different pitch. You won’t find anyone as memorable as an Ellis or a Francis here.

And yet… these dwarves didn’t have to inject any pathos into their barks when they kill a loot bug. They could have just said, “yay! Loot!” But they don’t – the dwarves make sure you know they find the loot bugs cute, and they regret killing them… if only those adorable little roly-polies weren’t stuffed with gold and nitra. 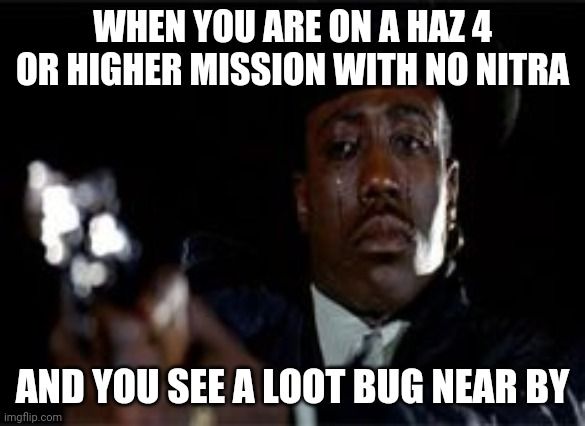 The loot bugs are smartly designed. They include gold, only useable between missions to purchase cosmetics and upgrades, and nitra, only useable during missions to call down resupply pods for your dwarves (that flamethrower fuel isn’t infinite, after all). No matter where you are in the game, there’s always good reason to slaughter one of those pudgy bugs to get what’s inside.

As an aside, here’s loot bug tip – kill loot bugs with your pickaxe. First of all, it means you don’t waste ammo on something that’s not trying to kill you. Secondly, it lets you get up close and personal, and really come face to face with what you’re doing to these defenseless sacks of resources.

This isn’t the only area the dwarves display some interesting tendencies. They are clearly a superstitious lot, too – just hit V on you keyboard to see what I mean. These superstitions get to the players, too – how many times have I joined a random group only to be met with a chorus of “Rock and stone!”s? My own regular play group never goes on a mission without downing a mug of ale or three (and yes, this will carry that drunk double-vision into the next assignment).

All that to say, Deep Rock Galactic succeeds at getting you invested in its characters with minimal writing. What’s there is scarce, but extremely effective. It only leaves one important question unanswered:

Just who is Karl, and what the heck happened to him?!

READ NEXT: Madden’s Flaws Won’t Be Fixed By Next-Gen Alone

Patrick Sklar is the Managing Editor at TheGamer.

He’s written previously for Screen Rant, Comic Book Resources, and The Escapist, among others, and has edited a handful of sci-fi literary journals. He is a graduate of John Abbott College’s Liberal Arts program.

Patrick is a reader, writer, editor, and game-player based in Montreal, Canada. He’s been an egg flipper, casino banker, bookseller, honest-to-god telephone sanitizer, and now works as an editor for Valnet, Inc. His passion for language inevitably led him to a career of telling people when they’re doing it wrong.

His favourite games include Netrunner (a two-player, asymmetrical, cyberpunk, heist competitive card game wherein one player plays the hacker, or Runner, and the other is a Corporation trying to keep its servers secure), World Of Goo, Mass Effect 2, Metroid Prime, and Donkey Kong Country 2.

Need for Speed Heat review: Sufficient, but not necessary