Home » Reviews » Doom Eternal: The Ancient Gods Part One Review: Too Much Of A Good Thing

After reviewing Doom Eternal earlier this year, I was shocked to discover how divisive it was among Doom 2016 fans. To me, Eternal was an evolution that eclipsed the original in a way most sequels don’t. I loved the puzzle-like combat that required a mastery of every weapon at the Doomguy’s disposal and the need to manage a variety of cooldowns. The enhancements to mobility made for interesting platforming segments and faster-paced arenas. I called it “The Thinking Man’s Doom” because I found the combat to be infinitely more engaging and satisfying than Doom 2016, a game that’s already pretty dang satisfying. 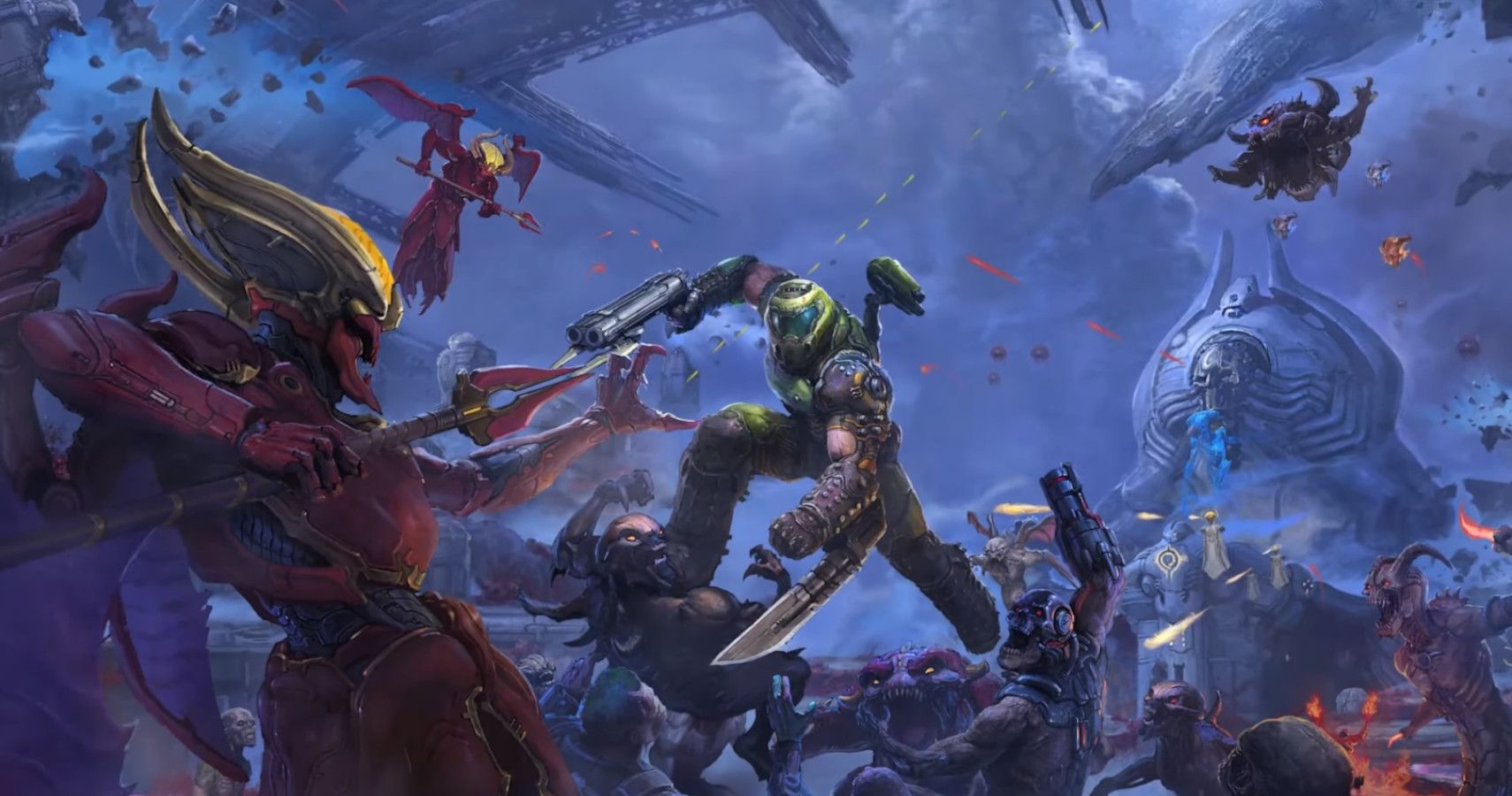 The Ancient Gods – Part One, the first DLC expansion for Doom Eternal, goes even further into the deep end with mechanic-heavy enemies and mindful combat. Unfortunately, I think this time, the result is something a bit more frustrating than fun.

Everything You Loved, Or Hated, About Doom Eternal

The Ancient Gods – Part One adds three new levels to continue the story of Doom Eternal. After ten hours with the new campaign, I can’t help but feel like the developers at id Software listened and took all the negative feedback, figured out the things that some people hated about Doom Eternal, and then doubled down on only those mechanics for the expansion. 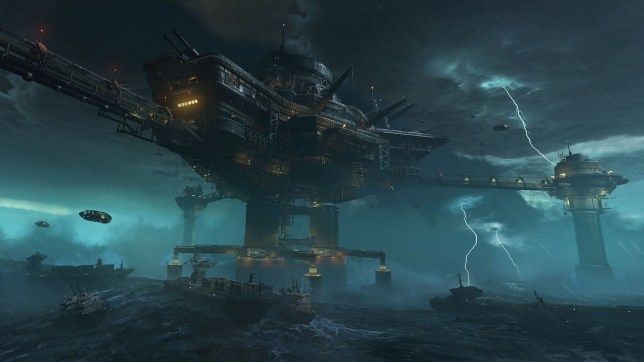 Every new enemy is countered with a specific weapon using a specific mod. There’s even an enemy, like the Maurader, that requires timed counter attacks to kill. Enemies have AOE attacks that restrict movement and some arenas now have hazards that will cause you to move slow. Buff Totems are back to make demons stronger, as are the post-launch empowered demons and a new demon called Spirits that possess other demons and increase the health and speed by what feels like four times. All of these buffs can stack and the result is demons that take a hell of a lot more damage to deal with, which means ammo capacity is an even bigger issue — especially when certain new demons require you to use a specific type of ammo.

The battles in this expansion are overwhelming and, frankly, often tedious. I constantly got stuck staring at the weapon select wheel mid-battle just trying to figure out which gun I needed to counter whatever I was up against. That’s not something I ever felt in the base game, and it took me a long while to realize I wasn’t just rusty, the game has actually become overly complicated.

I fully expected The Ancient Gods to be hard and I don’t have a problem with some of the challenges this expansion throws at you. Double Mauraders, invisible whiplashes, and new hardcore enemies offer fantastic challenges for players that have seen and done it all on Doom Eternal — that’s exactly what DLC like this should be. I think The Ancient Gods is actually a full difficulty step above the base game campaign, and not for a good reason. 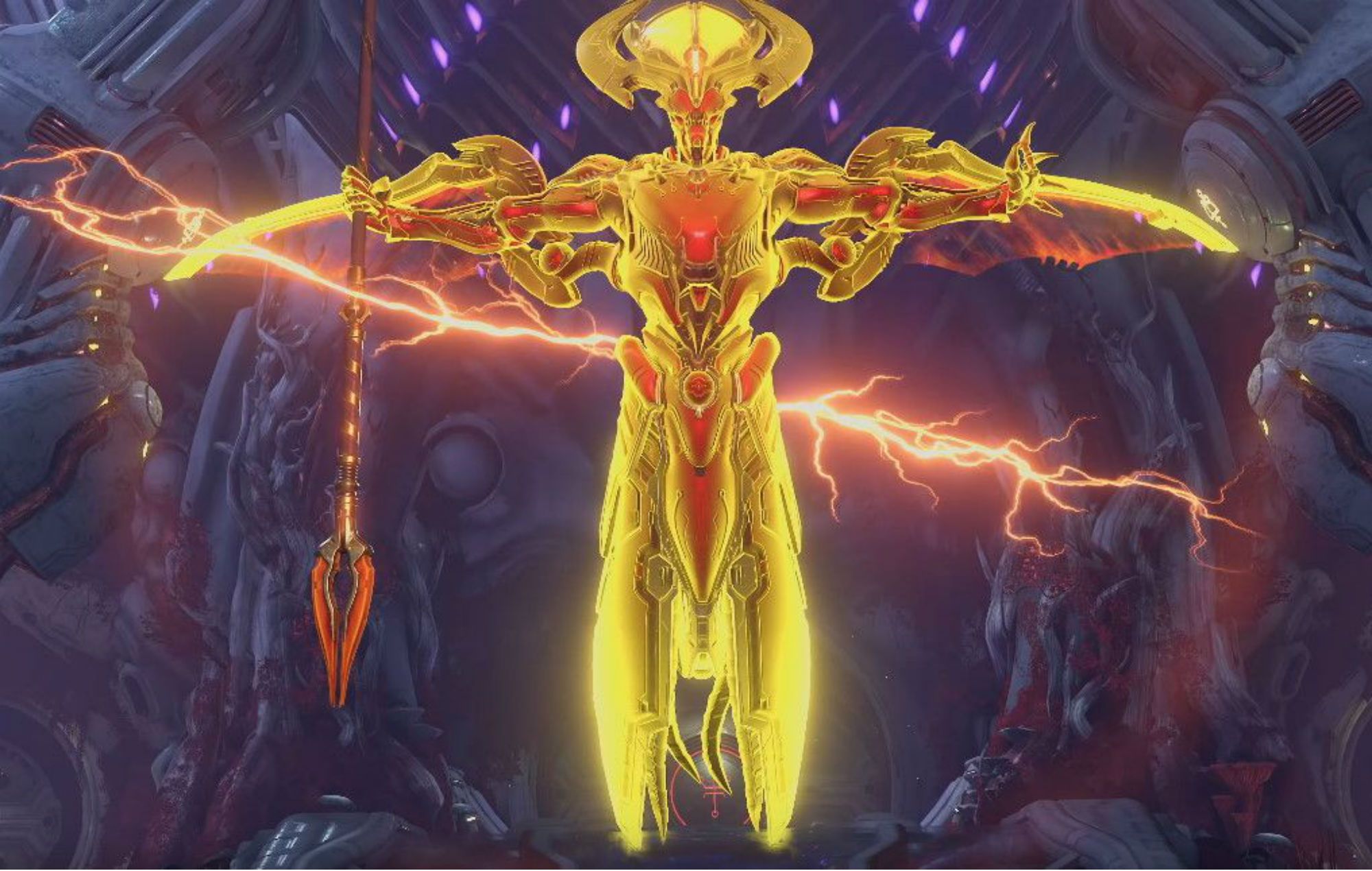 Better Get Good At Sniping

The best demons in Doom reward technique. You can blast a Cacodemon in the face with a shotgun until it explodes, but if you manage to lob a grenade in its gob, you’ll be rewarded with a quick, efficient kill. The same goes for Pinky: there’s nothing wrong with unleashing the quad-barrel chaingun into him while he charges at you, but if you’re quick with a juke you can get behind him and kill him easily by shooting his tail.

The enemies introduced The Ancient Gods don’t share these qualities. Instead, they are designed like marauders: tiny attack windows that require specific weapons to counter.

I never hated the marauders like a lot of people did because I think they add an interesting level of prioritization in an arena. Marauders require singular focus, something you can’t do when dozens of other demons are buzzing around. Marauders were used sparingly and always posed a great threat, I think they worked great when they were one of a kind. 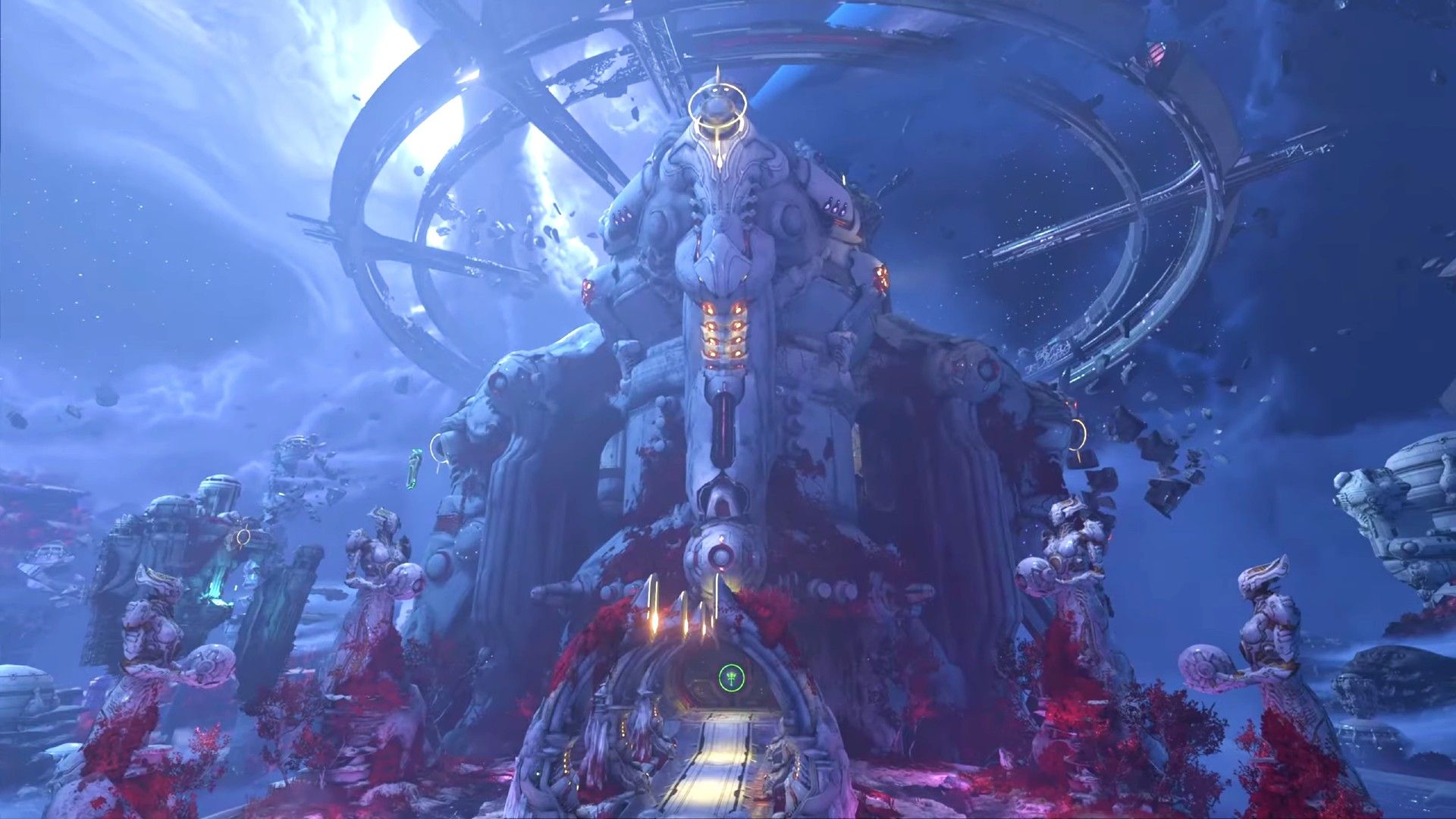 It’s just too many demons with specific, timed counters and it really creates a lot of awkward downtime in battle. I’d often find myself finally breaking a spirit out of a big beefy demon and unleash my microwave beam on it only to run out of ammo just before it was cooked, causing it to jump into another body to restart the entire tedious process. Other times, I ran around the arena kiting Hell Knights just waiting for the split-second opening when I could try to snipe a Blood Makyr. The way you approach fights in the expansion is completely different. It’s harder, but it isn’t more fun or more satisfying.

Everything Else Still Rules

I love Doom lore, and this expansion goes exactly where I was hoping it would go. The three levels are wonderfully designed and have some of the most memorable set pieces in the entire game. There’s a fight in a foggy swamp against invisible enemies that I adored and there’s one particular arena with transforming pillars that I found to be really inspired. I think the combat has become too complicated and I hope Part Two can reign it in a bit, though at this point, I’m expecting to fight three Marauders all possessed by spirits and buffed by totems while turrets shoot me to death. Don’t feel bad about lowering the difficulty on this one even if you got through Eternal on Nightmare. It’s not you, the game is just frustratingly hard now.

READ NEXT: 10 Video Game Demons That Could Give Doomslayer A Run For His Money 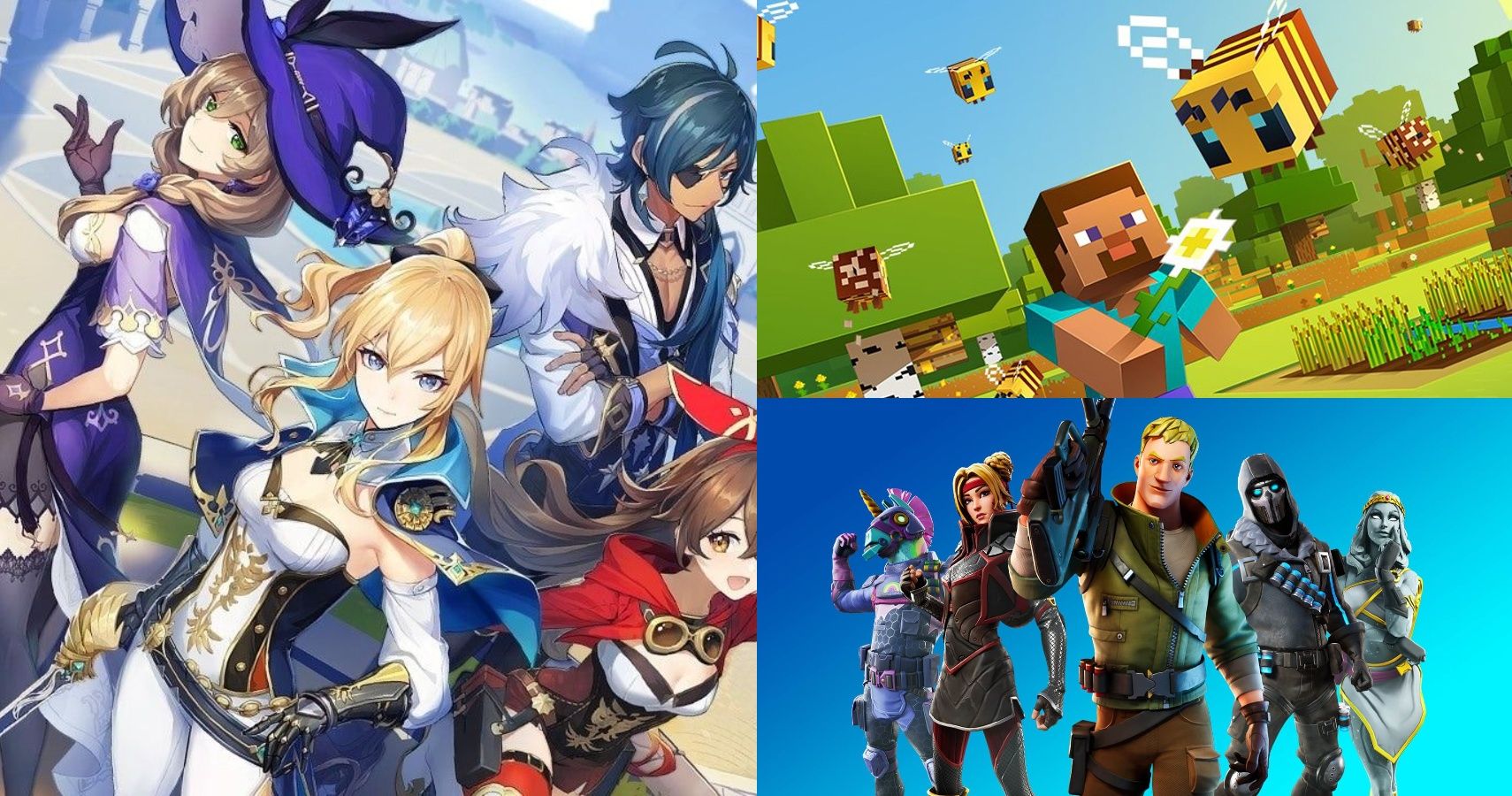 Reggie Fils-Amie To Present At The Game Awards