Ubisoft offered me the chance to get a closer look at Gods & Monsters earlier today, and the project shows a lot of promise. The new IP is crafted by the team behind Assassin’s Creed Odyssey utilizes the existing Assassin’s Creed engine and technology, but uses that technology to create an entirely new game and play system, with its own distinct art style. While it shares traits in common with Assassin’s Creed, one of the most notable shifts is toward a lighter and more all-ages friendly narrative vibe, and with a clear mythological bent, rather than a historical one.

The story of the game is told as a narration from the famous Ancient Greek poet, Homer, as he tells a story to his grandchildren. His magic lyre brings the story to life for the children, and relays a story steeped in Greek mythology. Players control Phoenix, a player-crafted character (male or female) who acts as an agent of the gods to hunt down Typhon and his many monsters.

Gameplay focuses on a mix of freeform exploration, traversal, combat, and puzzle-solving, across what appears to be a relatively vast open world. Phoenix wields powers gifted to him or her by the gods, which afford dramatic ways to affect combat. In one sequence, we saw Phoenix jump off a cliff, and then gently float down by summoning a flaming bird that matches the character’s namesake. In another instance, Phoenix chopped down a tree, and then used telekinesis to fling it a great distance. In addition to ground combat, the game allows for aerial combat situations to arise as well. 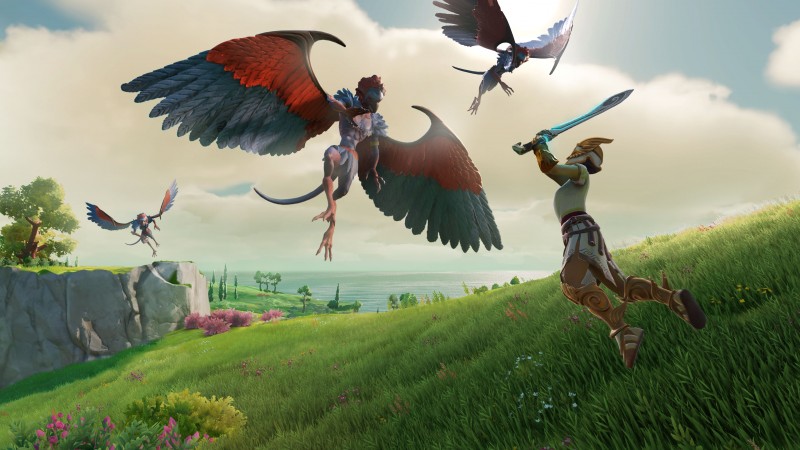 Stamina constrains many of your actions and movement capabilities, not unlike what players have come to expect in The Legend of Zelda: Breath of the Wild. Also like in that game, players will need to plan their route as they explore, since reaching a given area demands that you combine your jumping and climbing abilities along particular routes to reach a destination.

As an interesting side note, the version of the game that Ubisoft showed us was running on a mobile phone using Stadia, but played on a gamepad/controller. The version of the game we saw running on the small screen was smooth and attractive, and the bright painterly art aesthetic shone through. Distant vistas had that exciting quality that made us eager to go explore them.

Gods & Monsters is set for release on February 25, 2020, and is coming to PS4, Xbox One, PC, Switch, and Stadia. You can also watch the game’s debut trailer.

Haikyu Reminds Me Of Why People Care About Sports

Why Backward Compatibility Is Key To The Next Generation’s Success

Twitch’s Hot Tub Saga Is Over, And We Need To Move On