Diving into a game is akin to learning a new language. In each game, we first learn the basics: how to navigate the map, to attack enemies, to uncover new details in this world. With languages, we start with vocabulary, grammar, and syntax. In both, we slowly master individual components, entwining them to convey complex ideas.

Heaven’s Vault, the latest game from Inkle, challenges its players to master a game and a language at the same time. Within my first hour as an intrepid archaeologist named Aliya Elasra, I’m introduced to its video game-y actions: exploring many far-flung moons and peering into their nooks and crannies for artifacts. I also begin the arduous challenge of deciphering an ancient hieroglyphic language.

The adventure is meticulous and thoughtful, standing in stark contrast with most games that have put me in an archaeologist’s boots. In Heaven’s Vault, I’m not slaughtering hordes of enemies with a bloody pickax, or sniping at sentries with a makeshift bow. I’m performing the actual job.

To take on an archaeologist’s actual role in a video game, rather than become yet another blood-soaked treasure hunter, is a refreshing conceit. But with it comes the reality of the job: the perusing and parsing of dusty old tombs and sand-encrusted physical remains.

Where language supports action in so many modern games, it’s centered in Heaven’s Vault. Language is the action, the spine of the story, and the mystery of the plot. Language feeds the ultimate goal of unraveling the meaning of its mysterious hieroglyphs. Supposedly the long-lost language of an ancient civilization, these words can be found etched onto most artifacts and surfaces in the world: under a chair, at the top of a boulder, on the base of an effigy, along the handle of a discarded dagger — perhaps even on the soles of my boots, if I were to take a quick gander.

Upon discovering a line of inscription on these surfaces, I’m given a bundle of words with which to translate the message. An empty slot materializes below each hieroglyph, and I can drag what I think is the right translation into the slot. Occasionally Aliya will comment on my choices, giving me some clues as to whether they make sense within the context of the inscription. Even after I’ve made a decision, however, I’m still free to change my mind and carry out multiple rounds of deductions. In theory, I should gradually begin to recognize how the language functions as I continue to unearth and interpret even more of the game’s trinkets and curiosities. 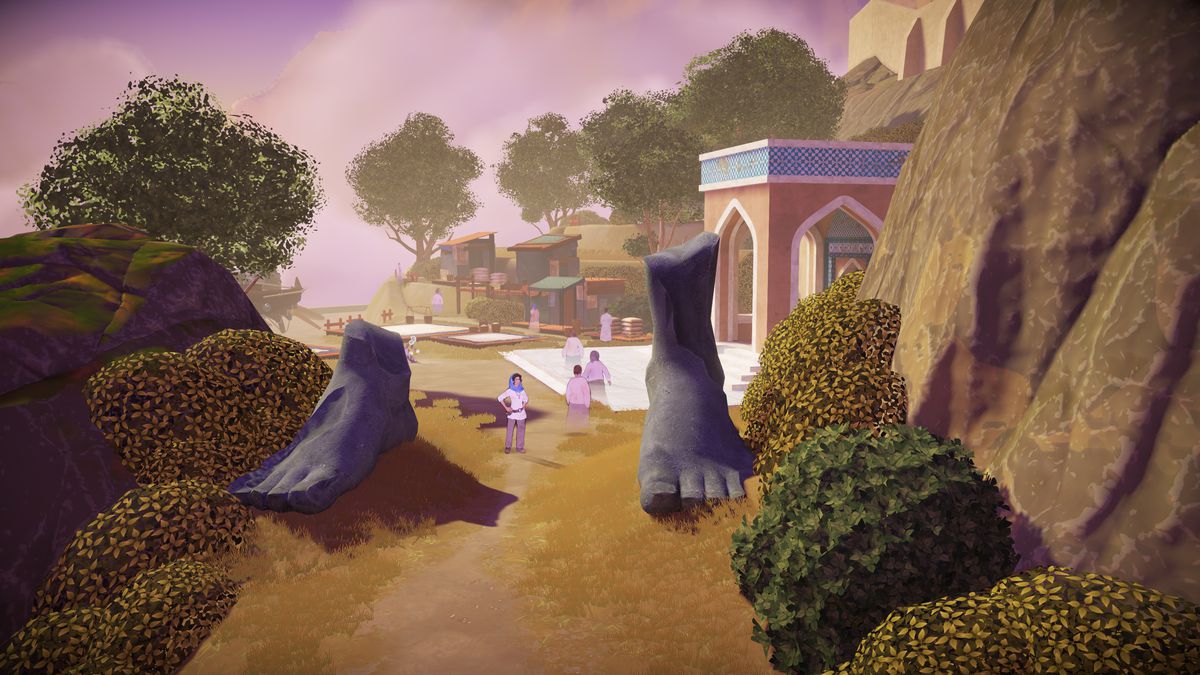 The game entwines the macro and the micro, from the fascinating geography I see at the ground level to the history of the cosmos — known as the Nebula in Heaven’s Vault — documented within individual artifacts. This mystery pulls me through some of the more taxing challenges of the game’s archaeology.

Sure, it may feel like a chore at times to parse this fictional history, but I want to know more. What are the origins of the coursing rivers that connect the moons? Or the whereabouts of the last emperor from the earliest days of the fictional country, “Iox”?

Discussing the translation of these texts with colleagues and friends is crucial, as they’ll provide more clues. I enjoy turning to the locals for answers, or at least context. Aliya converses skillfully with those around her, the game’s meticulously constructed narrative alternately unspooling and knotting itself with each chunk of dialogue. Exchanges take place organically, like when Aliya is in the midst of exploring a long-abandoned ruin, or while taking a leisurely stroll in the corridors of the upscale city Iox. Conversations skew toward the natural and dynamic, if not a tad jarring at times. Aliya can be blunt even when I don’t mean to be, and I feel unintentionally rude when choosing certain dialogue options. Mercifully, I can simply ignore or walk away from some exchanges when they get too awkward or tiresome.

These conversations provide my primary source of the game’s intricate and lore-heavy backstory. To understand the narrative, paying close attention to them is a must, and to keep my attention, they must in turn remain invigorating. Thankfully, the studio behind Heaven’s Vault, Inkle, understands the value of brevity. Folks don’t ramble needlessly about esoteric topics like the moons, the ancients, and the empire; instead, details are passed along gradually over the course of the game. What proves to be challenging, however, is connecting with the characters when they feel more akin to mere repositories for information as opposed to distinct personalities with lives of their own. Aside from dispensing insights about the Nebula, most of the cast feels like personalities mass-produced from cast-iron molds: You have the shifty rogue, the heartless opportunist, and the introverted nerd with his nose usually buried in a book.

Memorable characters are few and far between, but some stand out, keeping me buoyed to the game’s story just as I begin to drift. A mechanist named Oroi is particularly memorable. Her interactions with Aliya flash sparks of tension, her lines tinged with an undercurrent of unease and genuine concern for Aliya’s well-being. Another notable companion is Aliya’s robot ally that she crudely named Six, which had been deployed to keep tabs on Aliya. Six is an overly cautious and somewhat condescending android that likes dictating what it can or can’t do, much to Aliya’s (and my) annoyance. And because I can, I have attempted to scrap and sell its parts.

Conversations with this crew can help Aliya decipher some of the hieroglyphs. Take, for instance, Huang, one of Aliya’s friends and a scholar working at an Ioxian university. He’s always on hand to help Aliya out when she’s stuck in a rut, whether by confirming her interpretations of the ancient language or giving her more books and artifacts to pore over. But this doesn’t mean that their translation is always accurate; they’re still mostly conjectures even after much discussion. The catch is that I won’t get a foolproof confirmation of whether our guesses are correct. This can impact my interpretation of past events, and an ongoing investigation about a missing colleague at large. 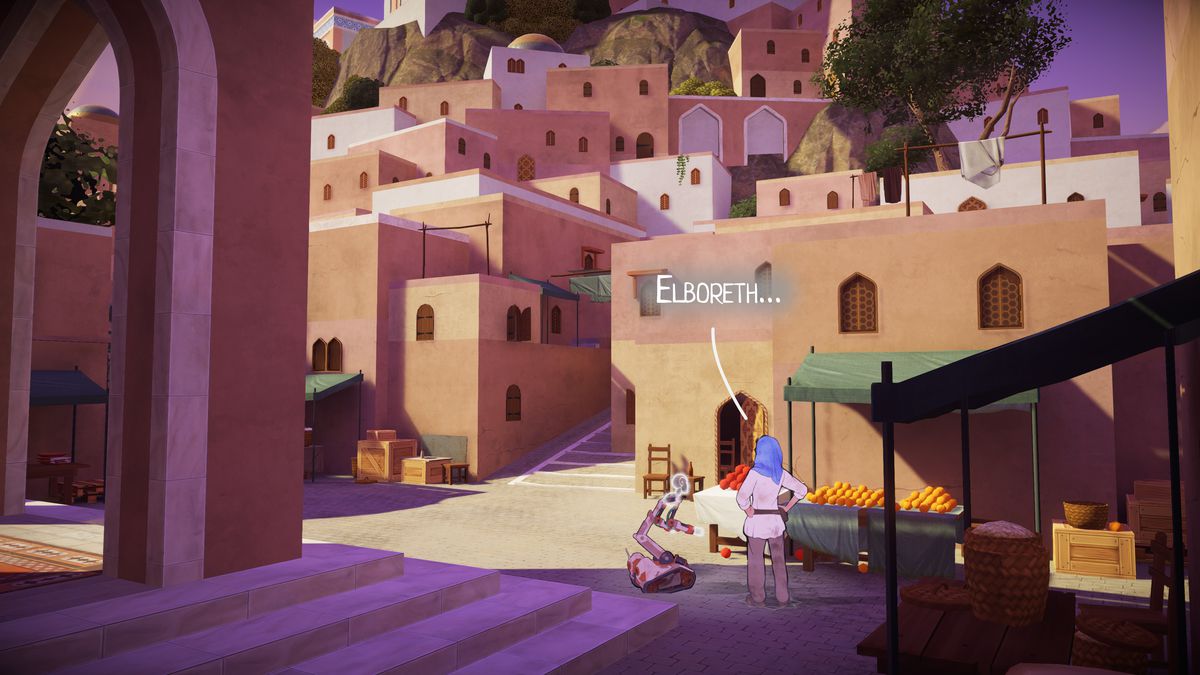 But therein lies Heaven’s Vault’s greatest gamble: The work of an archaeologist is work. While the sleuthing is intriguing at first, it gradually gives way to tedium when I’m faced with possibly my 50th inscription to painstakingly figure out. Making this wearier still is the slow pace of the game, which is compounded by how few reasons there are to care about the state of this world. When the activities, characters, and our conversations fail to maintain my interest or even curiosity, any motivation to uncover the answers behind the game’s biggest enigmas soon wanes — be it the plight of Aliya’s missing colleague or the chronicles behind the Nebula’s earliest years.

While I don’t care deeply about the world, I do admire its surface. The world of Heaven’s Vault is a hand-drawn alien landscape, full of breathing environments and quirky character designs. The abundance of detail — from the ancient megaliths looming out of the connecting rivers to the teeming bustle of a marketplace in the midst of a desert — entices me to excavate until I reach its core. Coupled with its enchanting orchestral music, these sounds and visuals work in sync, harmonizing perfectly to magnify the grandiosity of the game’s universe.

Heaven’s Vault does hold great potential; Inkle’s commitment to delivering an alternative (and more realistic) take on video game archaeology, and to encouraging players to decipher and learn a language, is inventive and mentally stimulating. But holistically, the experience is humdrum; there’s little incentive to keep on unpacking its world if I don’t buy into its fiction. And sadly, I do not. For a game that revolves around the beauty of languages, it’s a disappointment that Heaven’s Vault can’t find the right words to express itself.