There I am, roaming the ruins of a lost civilization, when all of a sudden an enormous robotic raptor pounces out of the detritus to rip my face off. I instinctively whip out my bow and string an arrow, letting loose to send its mark to its maker – is Ted Faro the god of robot dinosaurs? The ensuing screech sounds like bad techno made by a 14-year-old scene kid, piercing the air so precisely that it’s heard in tribes all around the Grave-Hoard. I loot its metal carcass and scale buildings that once had elevators as if I’m Alex Honnold 1,000 years in the future past.

Horizon Zero Dawn is a spectacle. Sure, it has its issues – I already wrote about how Forbidden West needs to ditch lifeless cities for something much denser – but its ambition is remarkable. When I first heard “spears and robot dinosaurs,” I thought it was the most stupid concept ever conceived. I told one of my friends I was never going to play it, but he was persistent in trying to convince me that it was “actually really good.” So, one rainy day after a long, early morning shift hauling 400-litre combis of alcohol around a supermarket, I installed it – about half an hour later I was a stupidly enormous Horizon stan.

I’ve always preferred fantasy to sci-fi. Just as my friend tried to convince me to play Zero Dawn, I’ve told plenty of people who won’t even watch The Lord of the Rings because “dragons and shit” to read Gormenghast – to no avail, sadly. If Horizon’s machines were organic, I probably would have pre-ordered it and played it straight through on day one. All that metal and wires, though… It just wasn’t really my vibe. Not enough dwarves. 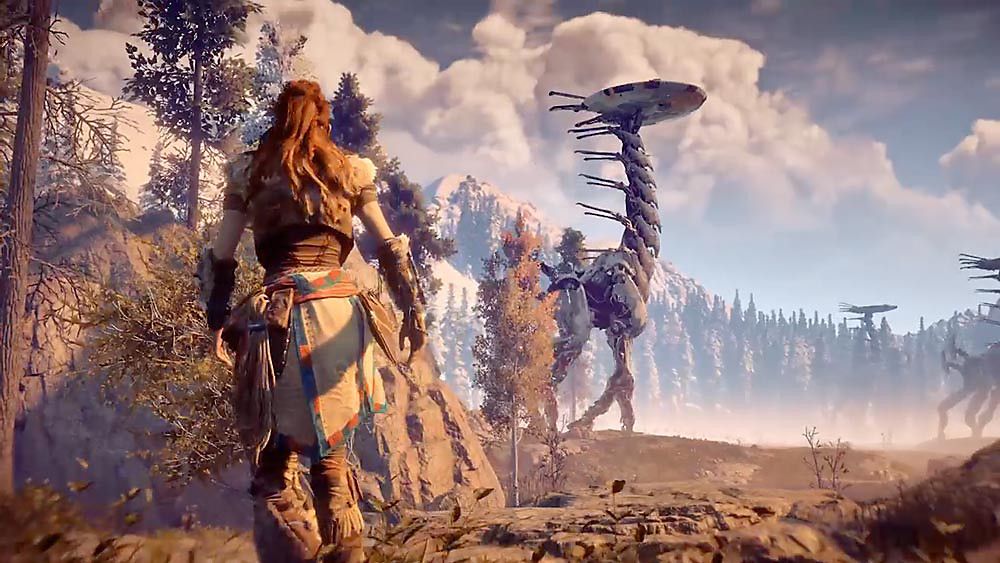 But Horizon’s technophilic and tribalistic dystopia is so singular and weirdly coherent that it instantly ascended to the top of the pops for me. Somehow, the stitching holding the aesthetic together is seamless. Metal ruins erupt out of the earth as towering trees stretch into the sky, all while an enormous, sentient Ubisoft tower with a brachiosaurus neck wanders between them without a care in the world. We talk about cyberpunk and steampunk all the time, but Horizon is its own distinct brand of punk. I can think of precious few other games that are half as ambitious with their environments – Prey, maybe, or Dishonored. Jesus Christ Arkane is good.

Anyway – I think it mostly boils down to the preconceived stupidity I mentioned earlier. In general, ambition is usually a byproduct of artistic outlandishness. If someone told you they wanted to fuse The Witcher, Jurassic Park, and Boston Dynamics into a single, cohesive entity, you’d laugh them out of the room. Who’s laughing now, though? Not you. Them. They’re the ones laughing at you because Horizon’s world is bloody brilliant.

I wish more games would invest time and energy into imposing intense focus on ostensibly absurd ideas. It’s an excellent way of achieving staying power and a bold method of asserting authority, particularly with new IP. Speaking of which, we know that Sony has at least 12 new IP in development at the time of writing – if any of the studios behind them have been given the same kind of faith ex-Killzone dev Guerilla was with Horizon, we’ve probably got lots to look forward to. I’ve still got my fingers and toes crossed for machine sharks and robot fellbeasts in Forbidden West, but I’ll absolutely settle for another genre-bending universe or 12.