The thing about going hardcore vegan in Minecraft is that it sounds a lot tougher than it actually is. I know it might seem a bit odd at first — you can’t eat meat, or use wool, or make leather armor. You can’t even kill the pesky spiders that skulk around your house at night, because technically they’re living creatures, too. Even the zombies and skeletons — though technically undead — are sentient beings, so even if there’s a skull-faced archer lobbing arrows at your head, all you can really do is run away.

But this was something I wanted to try — Minecraft Steve may have just been added to Super Smash Bros. Ultimate, but could he survive a fight without a medium-rare sirloin steak? These are the important questions, and I’m here to answer them.

So, I designed a challenge, not unlike my attempt to climb the competitive Pokemon ladder with Ash Ketchum’s Pokemon League winning team, or my vainglorious quest to find the best boozer in all of Skyrim. Here are the rules for my vegan Minecraft run:

With all that in mind, let’s get started. 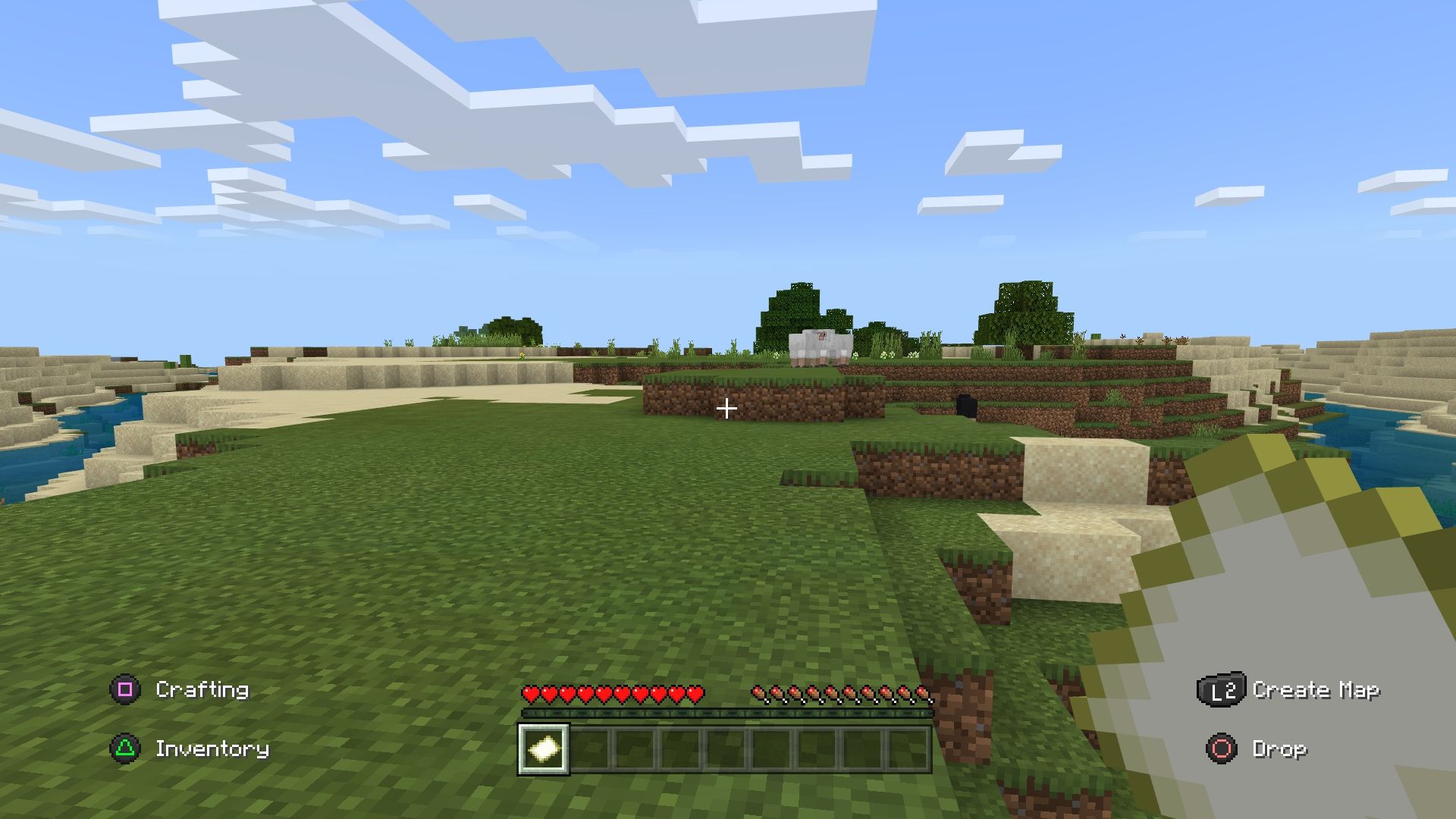 When I spawn into the world, all I’ve got on me is a map and my bare, vegan hands. The map isn’t very helpful, because there’s nothing on it yet. Also, as far as I can tell, it could have been made with squid ink, so I can’t use it. I’ve got to be careful — if there’s even a slight chance that animals were harmed in the manufacture of an item, it’s in the bin, regardless of how important things like “navigation” and “knowing where you are” might be.

I’m lucky enough to start with a belly full of healthy vegan food, but now I’ve got to fend for myself. There’s loads of sugarcane around me, so I chop a few stalks down for myself — alas, sugar of this kind is inedible in Minecraft. No matter how hungry you might be, Minecraft simply will not allow you to erode your enamel. So although I found food, it’s not going to stop my belly from rumbling — time to press on.

Night falls far quicker than I anticipated and all manner of beasties and creepy crawlies begin to swarm around me. Before I know it, this little zombie lad is legging it after me, swinging digs left, right, and centre. He’s chased me through a cave, across a river, and into a desert that — assuming the apparent lack of cloud cover means anything — is probably freezing. Look at him. 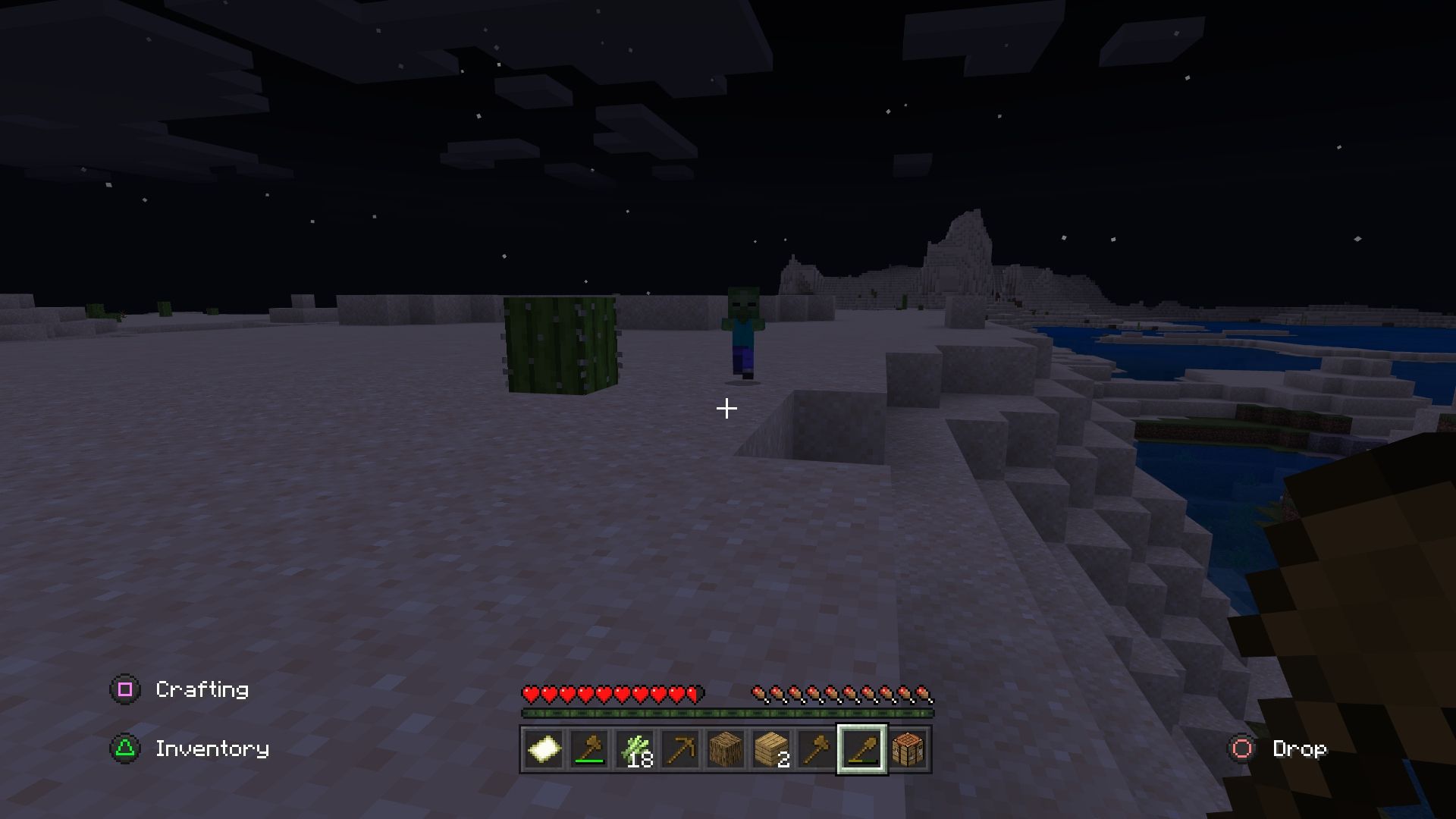 I’m usually pretty good at building in Minecraft, but this guy won’t leave me alone and all I have on me is some wood and heaps of inedible sugar. So I do what any crafty vegan would do and dig a hole straight down before plopping a nice patch of dirt above me, keeping myself out of harm’s way. It’s not the most extravagant housing, but the earthy aroma reminds me of why I’m doing this in the first place — nature is healing, and I’m going to heal with it.

I wait down there for a while, quietly humming Meat Is Murder by The Smiths to myself. Eventually I hear a bunch of cows mooing and reckon it’s probably dawn, so I dig up my little dirt shield and head back out on the prowl for some decent vegan grub. I stumble across some lovely pumpkins, but they’re not edible either — even when I grind them down into seeds, Minecraft is apparently not a fan of pumpkin soup. So I find some other seeds, locate a small pool of water, and craft myself a wooden hoe. I till the land and whack some baby wheat into the soil — it would theoretically grow faster if I threw some bone meal in on top, but I’m not allowed to fight skeletons. Living or dead, they’re sentient, remember? 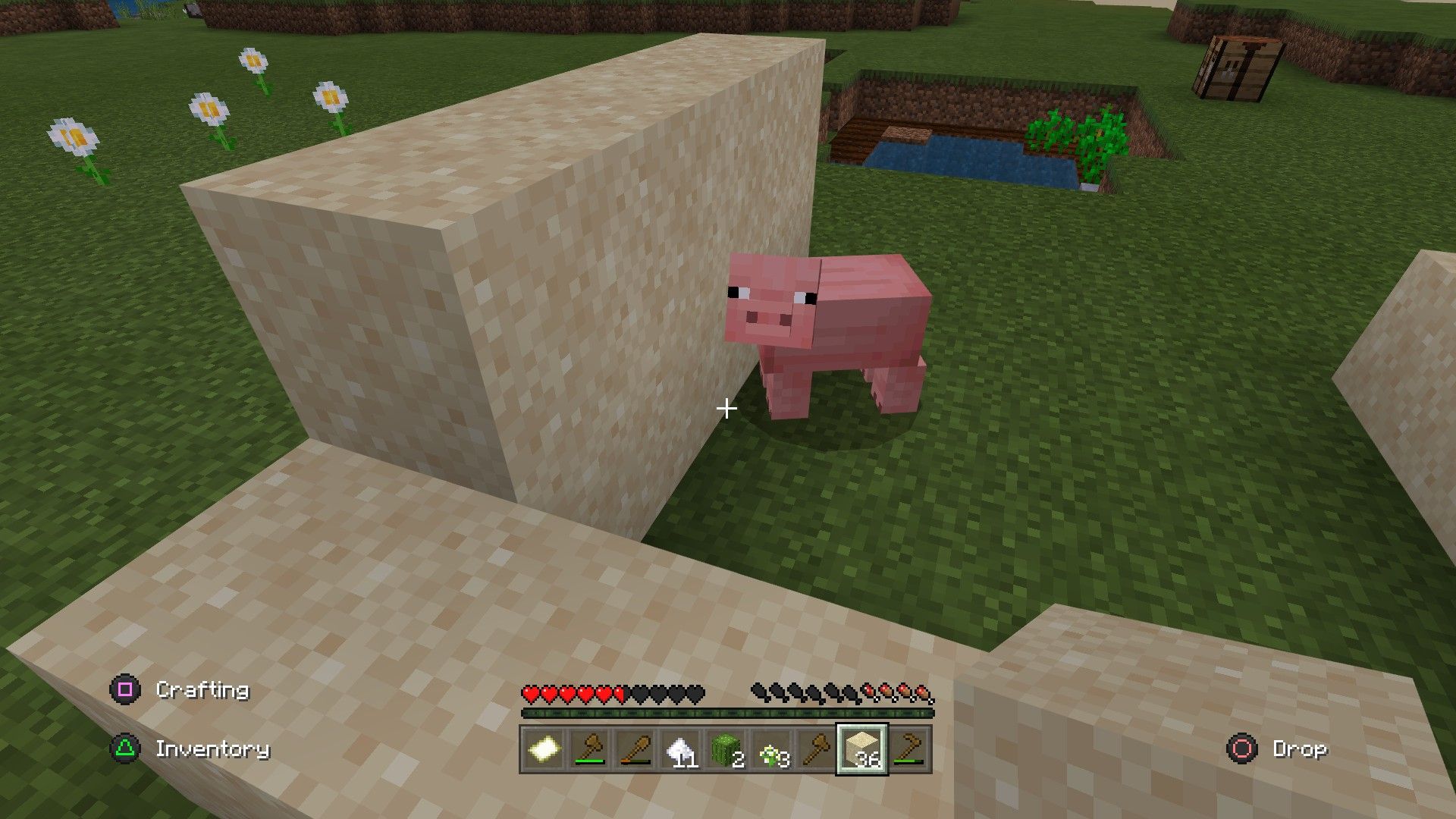 Darkness approaches fast and I don’t fancy lying in the dirt again, so I quickly make myself a house out of hard sand — a sandcastle, if you will. Unfortunately sand cannot hang suspended in the air, meaning that I need to use something else for a roof. Yes, I use dirt again, but at least this time it’s four squares above my head.

This is a dark night, if I’m honest. My hunger meter is way down, and my wheat still hasn’t grown. To make matters worse, there are loads of water zombies hanging out in the pool I’ve been using to make sure my seeds are watered, meaning that any time I go to check on them I get a smack off of an undead fist. At least they aren’t robbing from me — but that’s why this night gets so dark, because as soon as I think, “they’re not thieves,” I then consider, “but maybe I could be one?” It’s kind of cruelty-free, right? 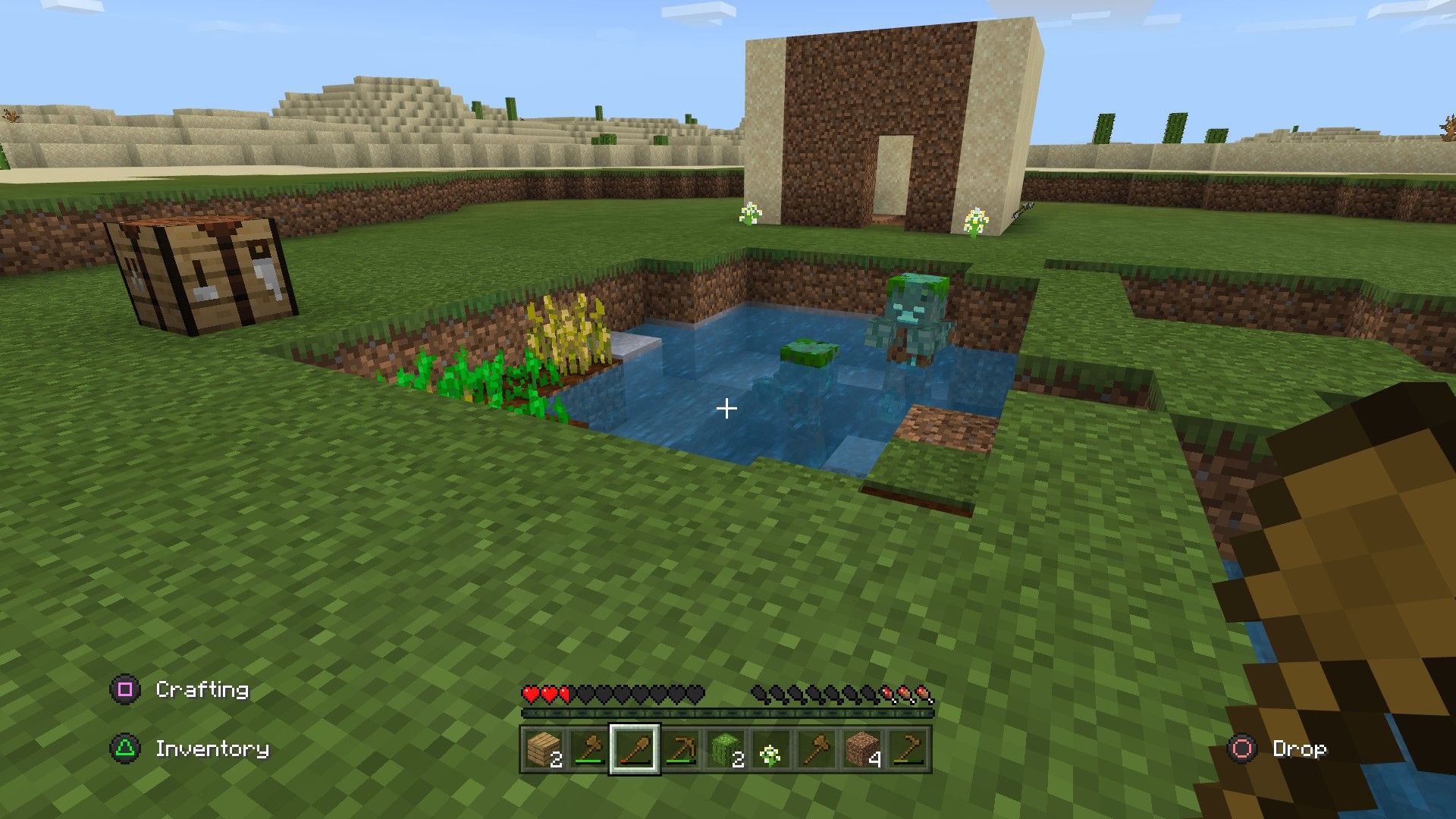 Just as I happen to entertain this fleeting but terrible thought, the pig that’s been keeping me company in my gaff walks out. You see, I hadn’t chopped enough wood to make a proper door, meaning that I used dirt to clog up the entrance, but I had to keep at least one space open so I could see whether it was night or day. And as soon as I say, “I’m going to find a village and nick all of their potatoes,” my piggy pal does a runner. I didn’t know pigs were psychic, but apparently they are — and judgemental to boot.

I burrow under my house to keep myself occupied. After mining for a bit, I manage to find some cobblestone, coal, and iron. This means I’ll at least be able to cook bread whenever the wheat has grown, and can build myself better tools for woodcutting and farming. I come back up to see it’s already daytime, but the wheat still hasn’t come in — growing desperate, I go out to search for something, anything that can satiate my hunger.

After exploring for a while, I see a couple of bees. I know this means there’s honey nearby, but honey isn’t vegan, so I traipse past them while pinching my nose, lest the wholesome aroma of nectar lead me toward betraying my pledge to be a friend to the animal kingdom. One of the bees stings me anyway. Prick.

I stumble upon a little river and notice there’s loads of seaweed in it, so I have a go at picking some. Dried kelp isn’t the most appetizing dinner, but it’s nutritious, and having some on hand means not dying of starvation. Alas, none of the seaweed I smash up drops any kelp, likely because the water is too warm. I see some lovely fishies and think, “people barbecue those, don’t they?” But I let them swim along to their heart’s content. One of them headbutts me anyway — honestly, why don’t the bees and fish around here understand I’m trying to be their friend?

I go back to my house empty handed again. Tired, defeated, and with only a single chicken leg left on my health bar, I begin to worry it’s almost time to throw in the towel. But there, in the distance, I see it. No, surely not… It can’t be.

The first batch of wheat is all grown up, looming over the idiot water zombies who raided my farm. And so I leg it over, chop it down, and bake some delicious bread. By the time the morning rolls around, the rest has grown in, too, and I have at least ten loaves’ worth. So I collect it all, fill my pack with bread, and say, “I’m getting as far away from these water zombies, mean bees, and vegan-hating lands as fast as humanly possible”.

I wander off in a random direction and begin to think I’ve made a mistake. I’m halfway through my bread, and although I still have loads of spare wheat, I’m not keen on the idea of having to sleep in a bed of dirt again. Just as I start to reconsider, though, I see a faint glimmer of light off to the side of the screen. A torch… But who put it there?

It’s not a torch. It’s multiple torches. I can’t believe it, but I’ve stumbled upon a bonafide village, equipped with ethical farming enclosures, proper housing, and a pretty decent nightlife, judging by how late these people are out. 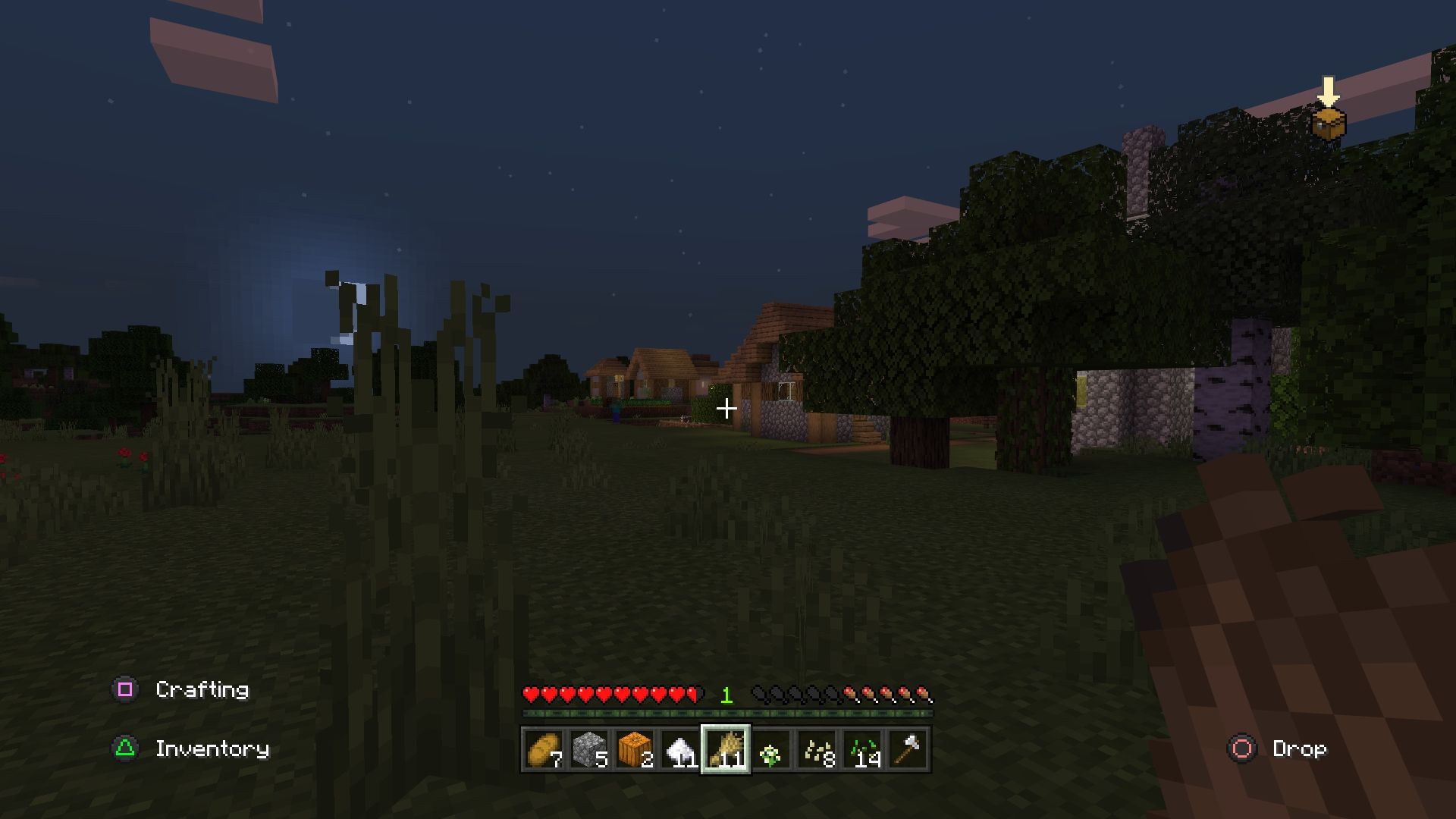 I sleep in an unoccupied bed and wake up at the crack of dawn. The hustle and bustle of the village, combined with my first decent night of sleep in ages, has me on cloud nine. I have a bit of a wander around and see a cow in a lovely little enclosure (I let them out during the day now, but they need to hang out in the pens at night so zombies don’t try to eat their brains). 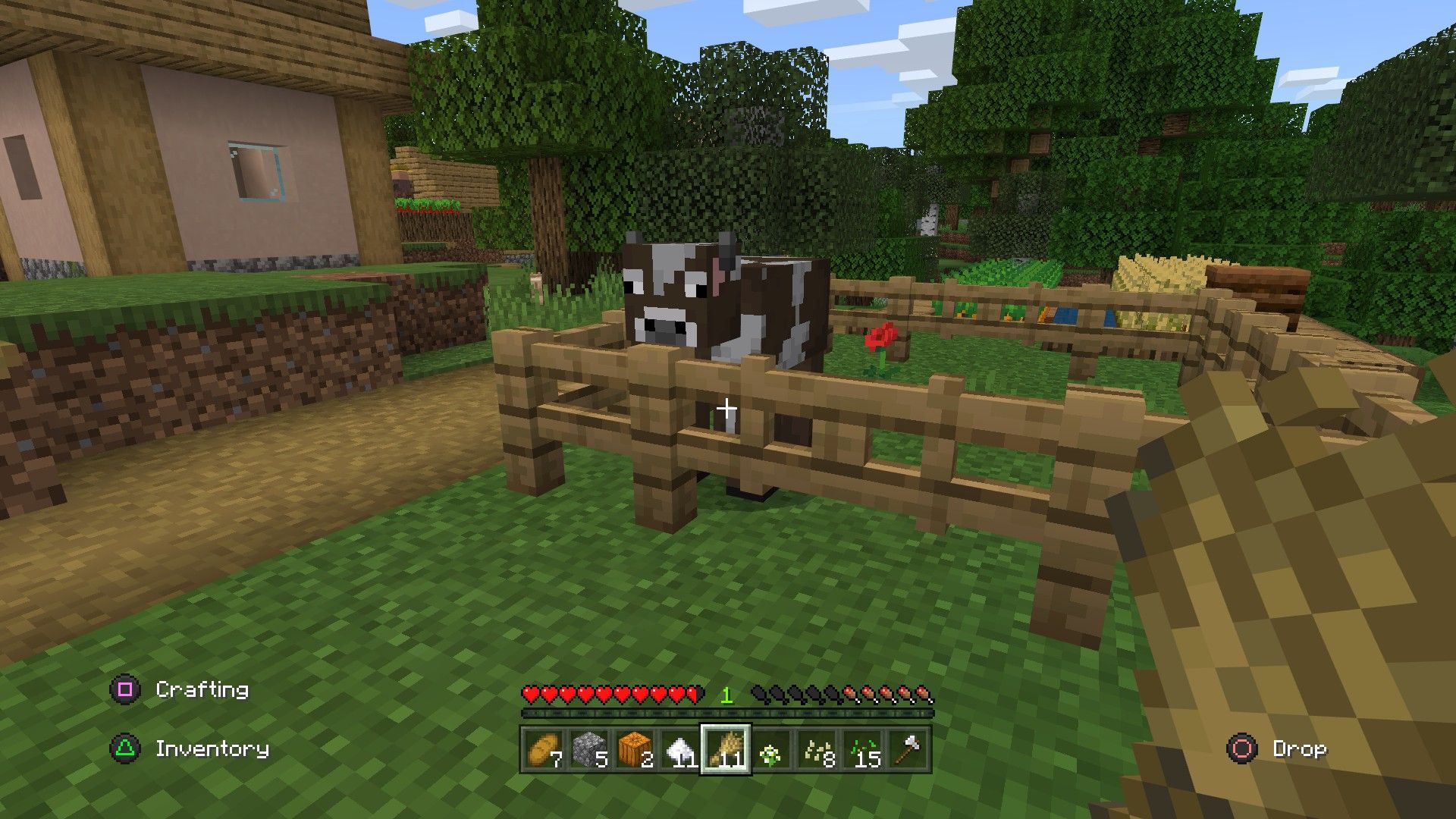 He’s lovely, isn’t he? I’m so happy that I decided to give him a treat. There are loads of carrots here, as well as wheat to burn, so I reckon it will be nice to earn his trust.

After he has his lunch, loads of little love hearts pop up around him. I try to get a screenshot, but I’m a second too late, and now it just looks like he’s rewarding me by doing a giant fart in my face. 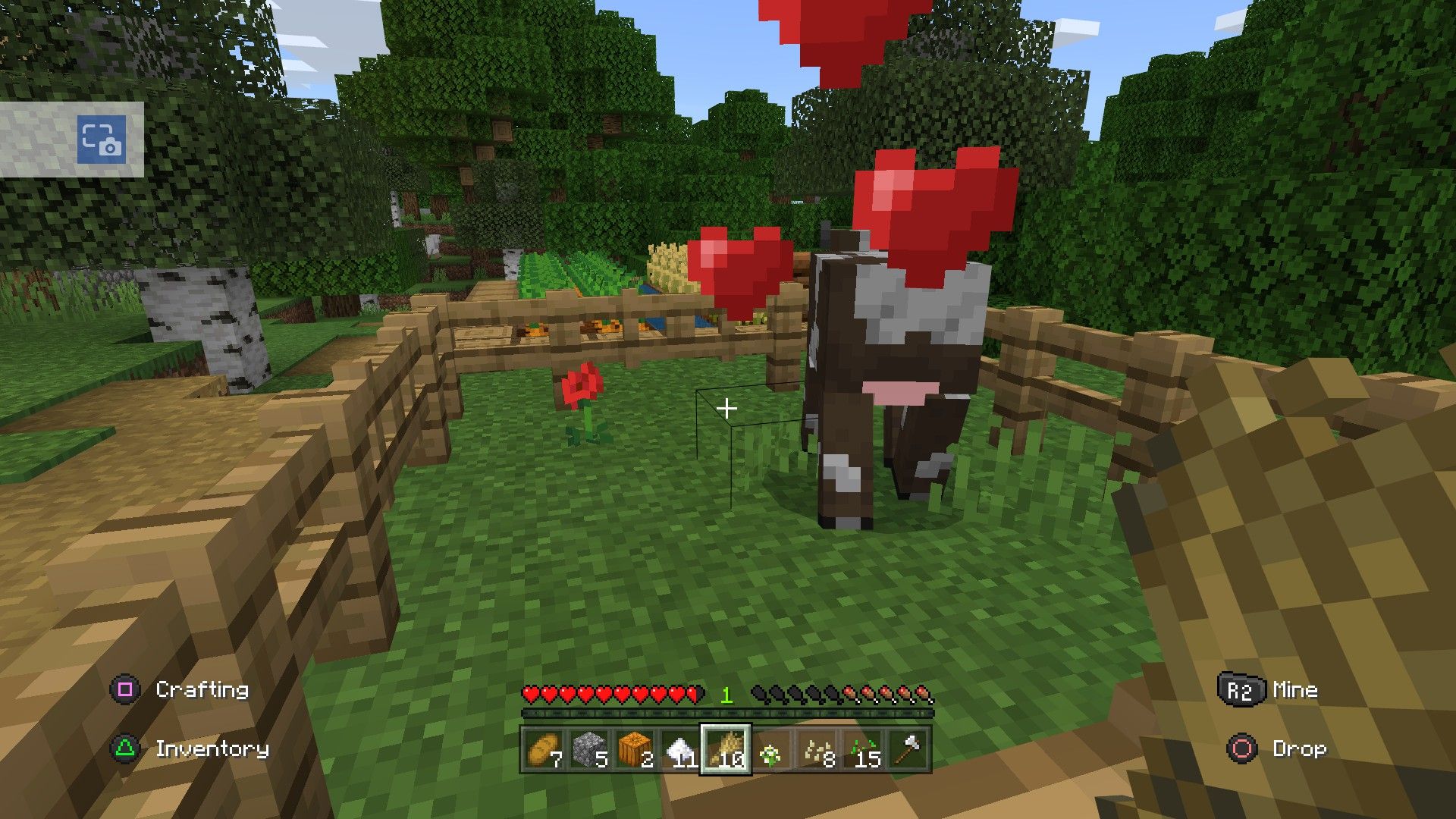 I do a runner to get away from the smell and decide to go carrot-picking. All of a sudden, this little lad rocks up looking for a bite to eat. How could you tell this face no? 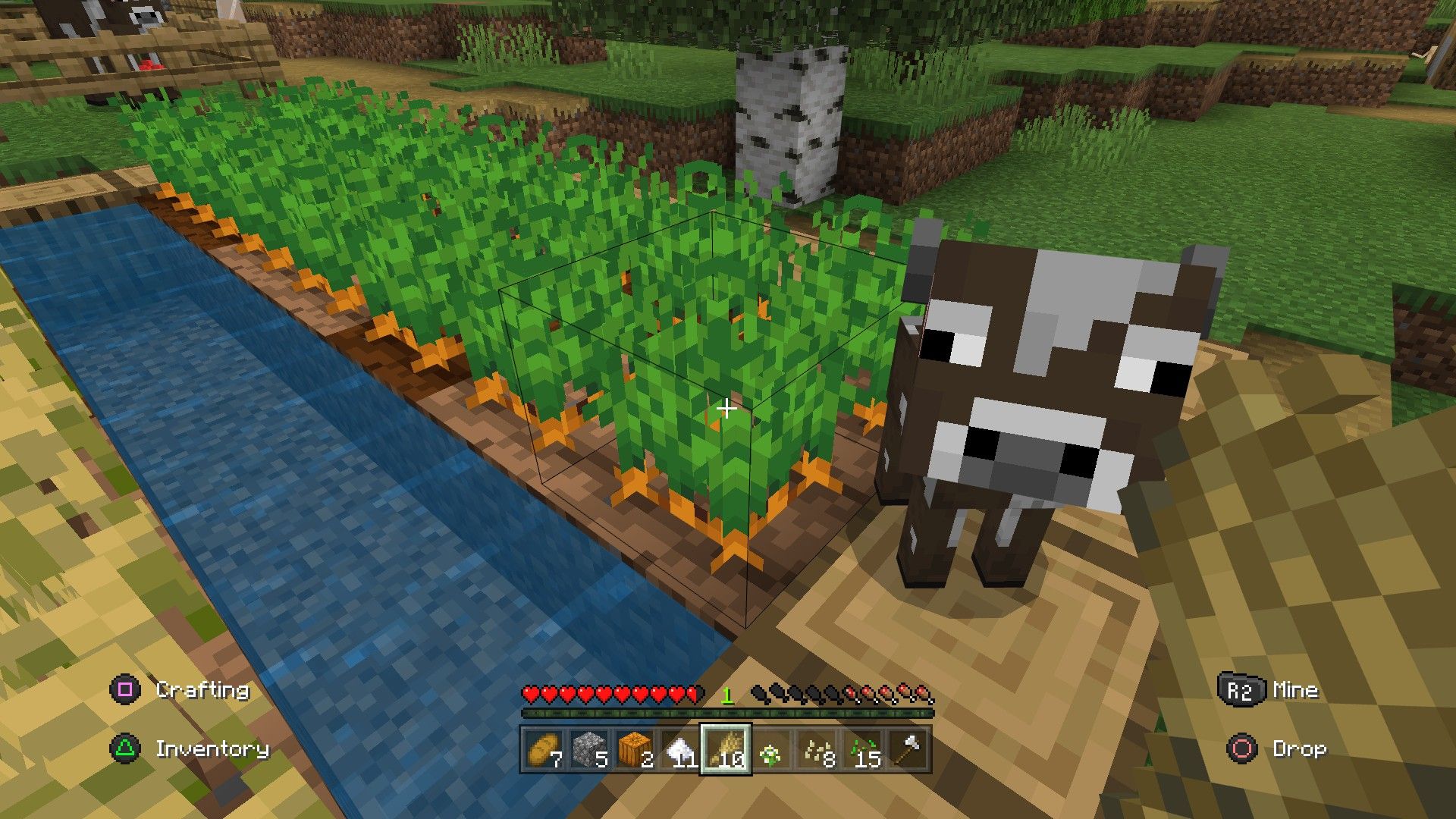 This is vegan heaven, I think. Animals roaming free, loads of veggies, sound people galore. This lad, who I’ve been calling Séamus, even has a stylish straw hat. Honestly, I’ve never felt so at home. 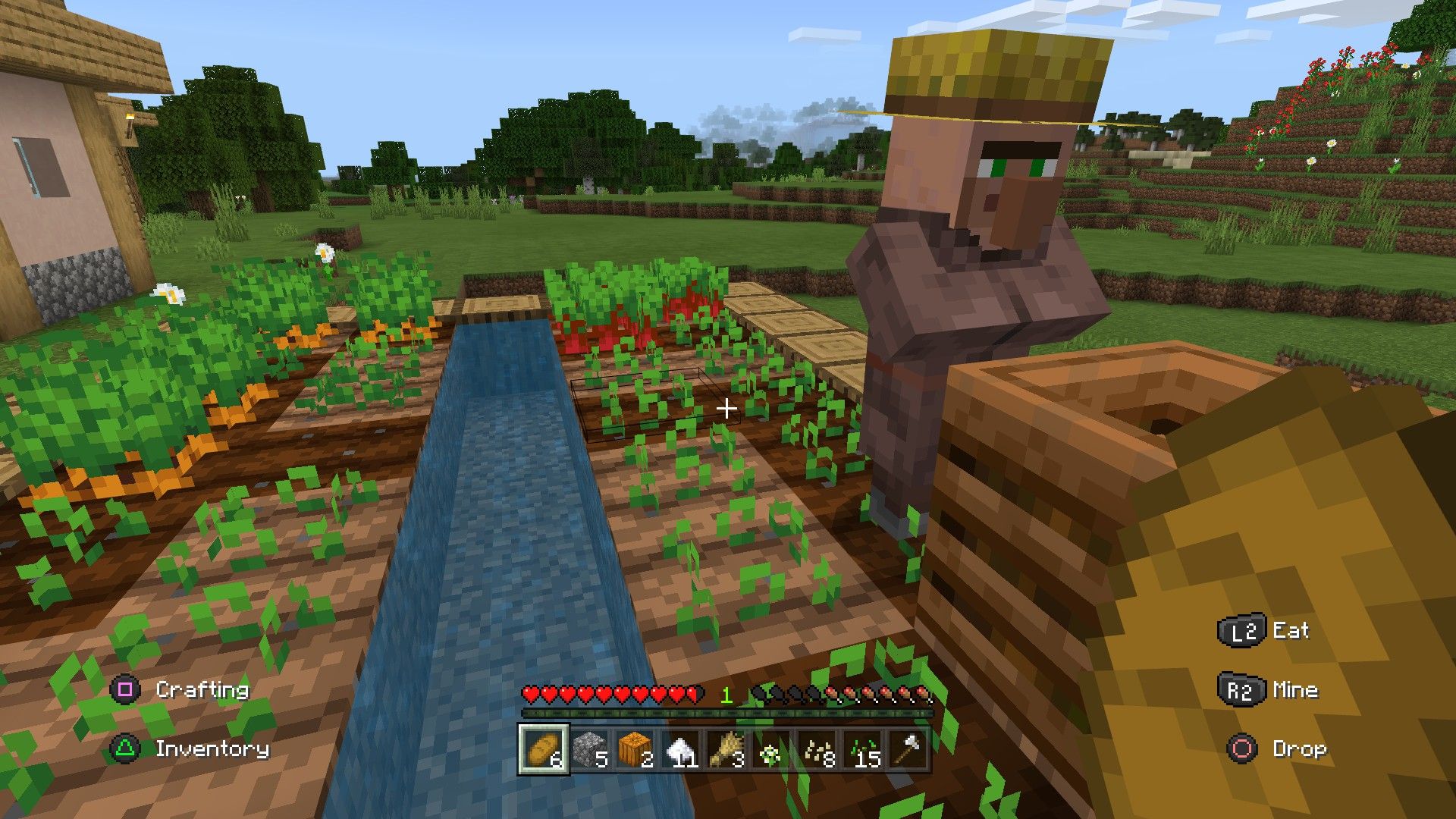 I don’t know why, but I’ve never really cared about villages in Minecraft. I used to visit them the odd time to rob everything — which explains the notions I had during that dark time I mentioned earlier, but that feels like a previous life. There’s something about this vegan run that has given me a newfound appreciation for community. All of the people in this village live off the land — they just eat carrots, and bread, and beetroot. There are cats and horses roaming around free, and all the cows and pigs have a lovely quality of life. The houses are nice, there’s torches all around the outskirts to keep the forces of evil at bay… I don’t know, but I’m comfortable here now, shooting the shit with all my fellow vegans.

It’s a bit weird at the start, sure, but once you get the hang of Minecraft veganism, it’s probably the easiest way to play. Probably a good thing I ditched the map right at the start, because now I couldn’t find my way back to my little sandcastle even if I tried. To think I actually considered robbing these people at one point… No, you’re lying. I would never do that.

MechWarrior 5: Mercenaries is a broken game saved by a single button

An Exclusive Look At Crash Bandicoot 4: It's About Time