Home » “I’ll Do Better At Darkest Dungeon After Completing Bravely Default 2,” Proven To Be Unimaginably False

Ah, yes. After many hours and endless nights of rage quitting Bravely Default 2, I finally made it to the end of the game. Admittedly, the game did get easier once I learned how to utilize jobs and abilities more effectively, but some of those final bosses are truly no joke. After completing the game, I was feeling pretty good about myself. Considering the amount of reading and strategizing I had to do to make it through this game, I figured I must be at least a little bit better at strategy games than before I had started Bravely Default 2.

A few months back, I had tried my hand at Darkest Dungeon, another turn-based RPG. Unlike with Bravely Default 2, I played Darkest Dungeon on the easiest mode, Radiant, because I’d heard horror stories from others who had played it. I got destroyed. Worse than getting destroyed, I got destroyed again, and again, and again. It was so infuriating because I absolutely loved the art, audio, and style of gameplay, but I simply couldn’t do it. So, I wrote an article on how the game is actually more difficult than Dark Souls and called it quits.

The whole point of games is supposed to be that you can keep playing them and get better though, right? …Right? 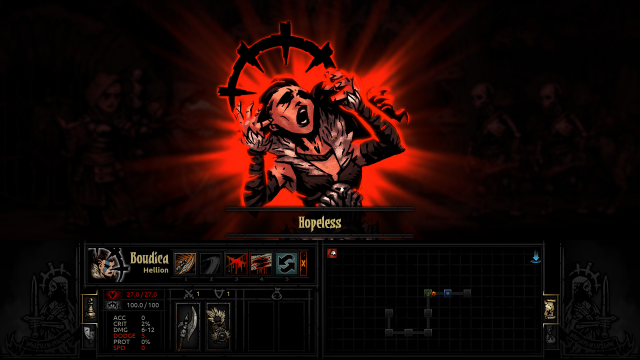 So, after spending several months feeling like I was really learning how to play turn-based strategy games more effectively, I figured I would at least be equipped to handle Radiant mode of Darkest Dungeon. I was actually pretty excited to feel like I finally had the skills to pick the game up and be able to thoroughly enjoy it this time.

It was about 15 minutes into Darkest Dungeon this time around when I realized this game could not care less about skills or improvement of any sort. Clearly, its sole purpose is to make you hate everything and suffer endlessly, no matter what actions you take. No, it’s not a difficult game, it’s a completely impossible game based solely off luck, of which the player has none of at literally all times.

At least, this is what I’m telling myself to feel better after getting monumentally crushed once again, perhaps even faster than the last time I attempted to play it. Me and my horribly wounded ego will just be over here playing Stardew Valley until further notice…

Next: Octopath Traveler Is A Great Example Of Why True Endings Should Not Be Hidden In Games

The most influential board games of the decade, according to top designers