Home » Interview: How Validate Is Pushing For A New Benchmark in Visual Novel Diversity

Visual novels are becoming an increasingly diverse genre, offering creators an avenue to tell bold, inclusive stories without many of the barriers that accompany traditional game development. We’ve seen a huge range of projects emerge in the wake of this resurgence, with titles such as Dream Daddy, Doki Doki Literature Club, and Neo Cab pulling the genre away from its limited roots and crafting it into something far more meaningful.

I recently caught up with Dani Lalonders, one of the creative leads on Validate: Struggling Singles In Your Area, about crafting something new in the genre and the challenges that come with standing out in such a space. In a world where Black stories are often defined by racial trauma and adversity, the team behind Validate wants to craft a romantic adventure which is simply about a vast group of distinct characters living their lives, having fun, and falling in love.

“I don’t like media that relates to race, because I think we already have too much of it, especially as a Black person,” Lalonders tells me. “It’s either police brutality or slavery and there’s no in between, it’s very exhausting. In Validate we are obviously going to touch on race, it’s a game with all people of colour, so it’s going to come up once or twice, but it’s not going to be a constant theme. The focus is on them being people, on mental health, sexuality, and recovering from trauma. We want it to be realistic without having racial trauma. Because in a lot of games, when there are people of colour, it just revolves around race. We don’t want to do that. This is a visual novel, it’s a dating sim, it’s about dating.”

Born out of a crowdfunding campaign, the characters and themes of Validate are a reflection of its vast team, and the desire to create a game that represents people of colour without delving into years of prejudiced history. It’s a refreshing perspective, although making the project a reality through traditional means is far from easy. Lalonders talks to me about pitching the games to publishers, and how visual novels continue to struggle in this space. “I stopped pitching because everyone was saying the same thing. We don’t fund visual novels because we don’t think they are profitable,” Lalonders says. “It’s really unfortunate because I’m not the only one whose had that experience. All of my visual novel friends have had the same experience, and a lot of them ended up self-publishing because a publisher won’t pick up their game, which is what Validate is doing, and I honestly prefer it this way.”

Visual novels have proven to be popular with some publishers such as Devolver Digital, but these are often more eccentric titles such as Hatoful Boyfriend, while Sega is producing experimental titles like 13 Sentinels: Aegis Rim that go beyond the traditional formula. Mass Effect and Persona ape the conversational systems and moral decisions that the genre helped pioneer, but builds upon them with battle systems, exploration, and other mechanics. Visual novels in their purest form are often left out to dry, despite being able to tell stories not found elsewhere in gaming. 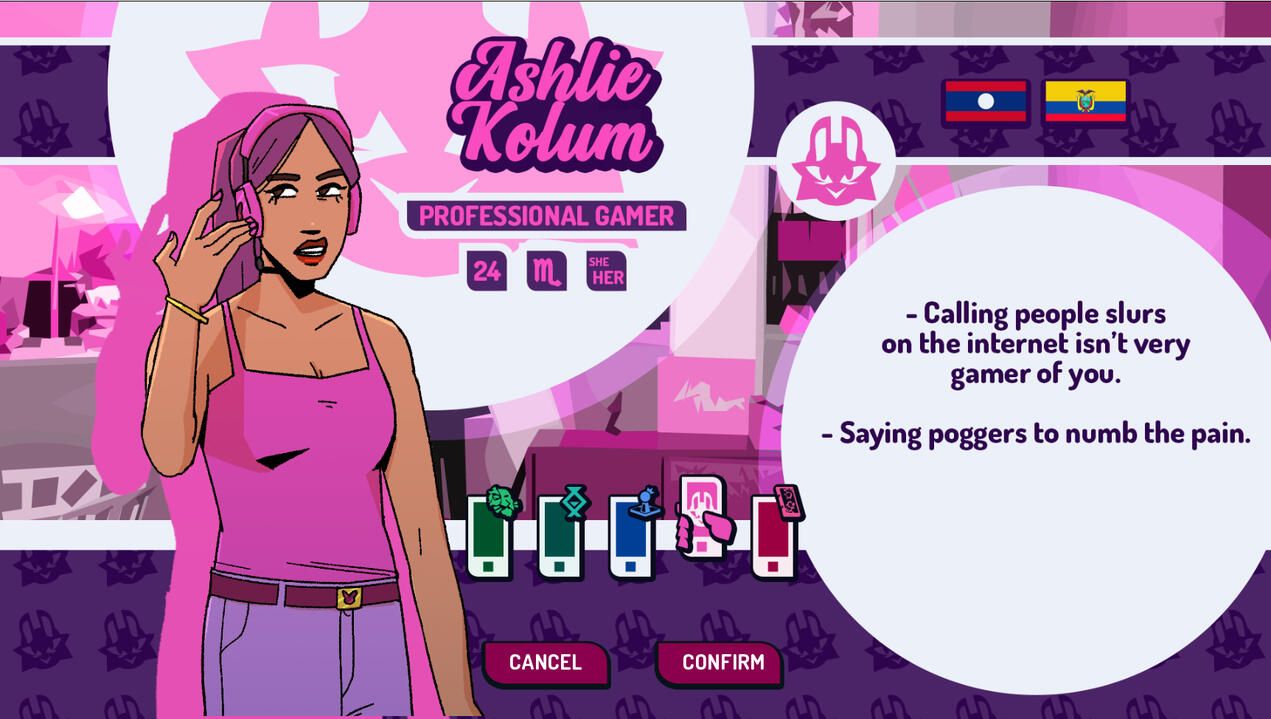 “In interviews, a lot of people told me ‘You have a great game, the team is amazing. You’re very kind and you’re very hard working but it’s just not going to happen’. I got really tired of hearing that because you’re saying my game is perfect. You’re saying all these wonderful things about my game, but you’re not taking my game on,” Lalonders explains. “A lot of publishers don’t actually do research on games they typically wouldn’t publish. I told so many publishers so much information they knew nothing about, and I’m like isn’t this your job?”

There’s an unfair perception surrounding visual novels and how they’re inherently wacky, weird, or sexual – often being the butt of many jokes when more serious games are given the wider spotlight. It’s changing for the better, for the battle is going to be a long one. “When people see the [visual novel] label they automatically think of your typical anime visual novel,” Lalonders tells me. “There’s nothing wrong with those games, they’re just personally not my thing, and the Japanese market has made it very, very helpful for an indie developer like me to make visual novels and creating that market. Now the western world is slowly jumping on the visual novel trend and you’re seeing people say, ‘hey it turns out visual novels are actually super duper cool!’ and we shouldn’t judge the genre because the characters are x, y, and z. I feel slowly but surely, it’s becoming an industry standard, but we still have a lot of work to do.”

Lalonders is also aware of how the gaming community can react to experiences that push diverse characters and themes to the forefront, with a loud minority proving to be needlessly bigoted in the face of progress. As an indie project, Validate isn’t constrained by such obstacles, but its team still recognises how much progress the medium needs to make when it comes to being wholly accepting to all races and identities. “Validate got a lot of backlash because gamers are racist, and that’s gonna happen in any game that comes out where a majority of its characters are people of colour, there is going to be racism,” Lalonders says. “It happened with Deathloop, which is one of the most anticipated games of the year. The two main characters are Black people, so you had people saying this is really cool, but you also had people being very racist. If triple-A developers wanted to put the effort in [and tell diverse stories] they would have to not only put the effort in but find solutions to the backlash.”

For a game like Validate to succeed, it needs to supersede bigotry and tired conventions of modern gaming, which for Lalonders, is far more of a marathon than a sprint. “Triple-A is all about money, they don’t care about anything but money,” Lalonders says. “If Validate sells, or a game like it does well and people are constantly talking about it, there will be a shift to how people are seeing games. [Big publishers] will see examples like Validate and think we can have these diverse skin tones, diverse ethnicities, and diverse body types in our games and people will still play it. I think a lot of people are just afraid to take the risk.”

Validate is in development with a planned release window of Spring 2022.

From MySpace To Mobile Games: An Interview With Jam City CEO, Chris DeWolfe

Ratchet & Clank review: So addictive you won’t want to put the PS4 pad down