Kasumi Goto is one of my favourite squadmates in the Mass Effect trilogy, which feels odd to say given that she’s a DLC character with significantly less dialogue than the majority of the series’ other companions. While Garrus has plenty of branching conversations to exhaust and Miranda has unique remarks after most missions, Kasumi generally says just four sentences each time you visit her in the port observatory aboard the Normandy. It’s funny – ironically, this is just one of several reasons as to why she’s so brilliant, as well as why it’s so important that she’s not a romance option.

“Kasumi’s personality came from a desire to have a female ‘best friend’ for Shepard,” Mass Effect 2 writer Jay Turner tells me. “Someone irreverent and quirky and confident who isn’t there for Shepard to date.” Garrus fills this role for Male Shepard already – and was supposed to be non-romanceable for FemShep, too – while Wrex is best buds with Shepard regardless of gender. On the contrary, most of the female characters in Mass Effect 2 can be romanced by Male Shepard – Turner wanted to change that, to make a point that you can be friends with people without having to sleep with them.

You truly do become friends with Kasumi, too, despite all of the constraints inherently attached to writing a post-launch character. If anything, her gossipy one-liners feel more amicable in nature than most of the ostensibly deeper stuff you get with other squadmates. Kasumi talks about how Joker and EDI are like an old married couple long before Mass Effect 3, and wonders aloud about whether Jacob – who she describes as “mmm” – is into girls with “a penchant for kleptomania.” She’s not saying this about you, the perfect paragon or rogue renegade – she’s saying it to you, a friend she can confide in without some kind of misperceived romantic undertone. 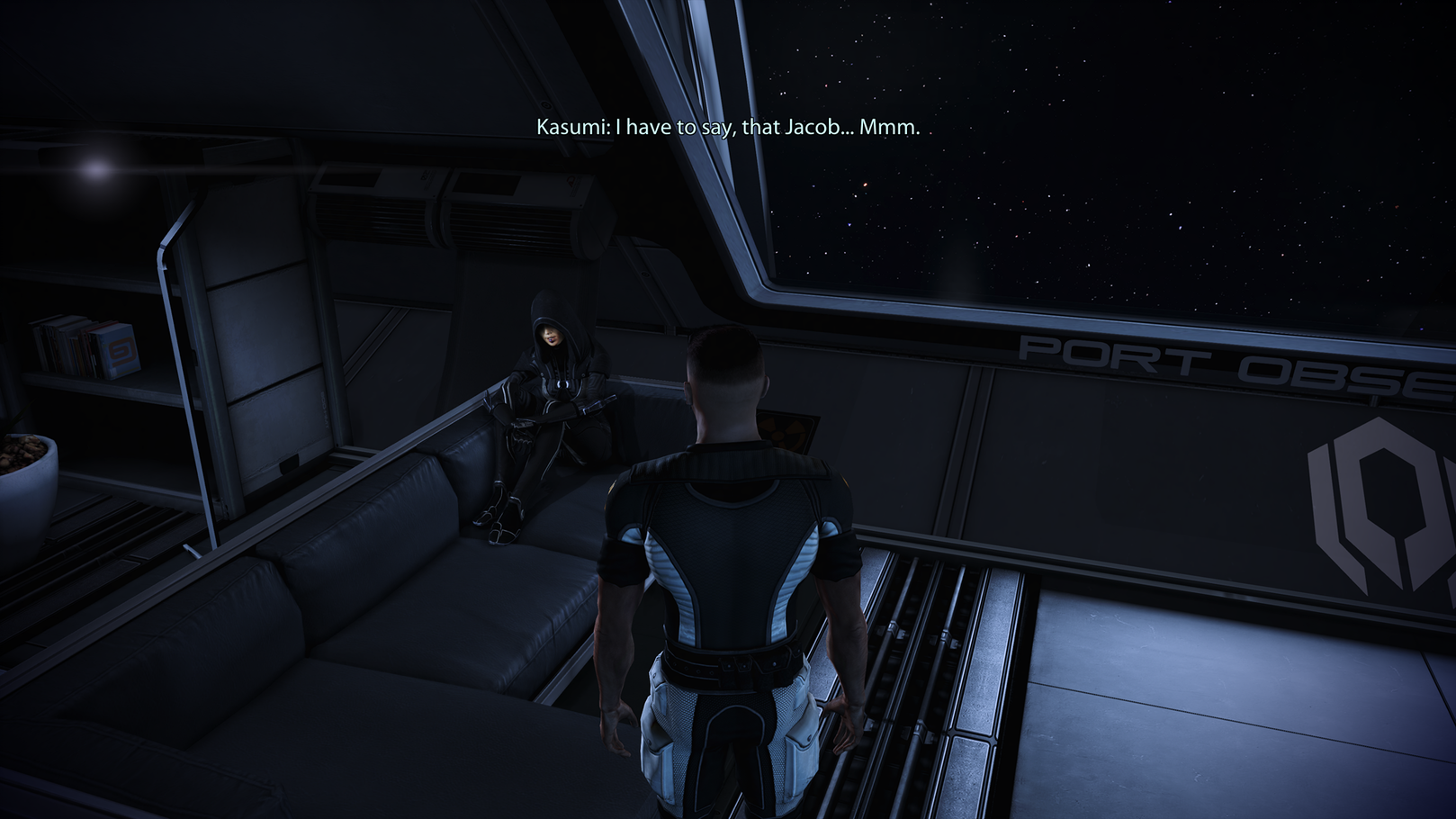 This is ultimately what allows her to shine. Kasumi’s witticisms on missions have always been some of the cleverest and most cunning in all of Mass Effect, but it’s the difference between a platonic, unpretentious, completely transparent relationship in which you can be at ease and something much less stable or easily understood. Contrary to some of the other companions, Kasumi is comfortable around you to the point of playful cockiness, and will gladly slag you off in a way that only your Two Bros Chillin’ In A Hot Tub Five Feet Apart Because They’re Not Gay friends will otherwise.

“She’s the greatest thief in the galaxy (especially now that her partner Keiji is gone), and she knows it,” Turner explains. “She’s a little bit Batman: She has plans on top of plans, even if she seems flighty or flippant. She’ll compliment your Hello Kitty pin even as she takes a running start to jump onto a helicopter and take it down solo.

“She was also a glimpse into a wild underground where there are art heists and Bond villains and respect among thieves. She was immensely satisfying to write, because she was snarky and loveable and highly competent, and hers is one of my favorite love stories (tragic as it may be) in the trilogy.”

This is where Kasumi’s character goes beyond most of the other squadmates and really comes together in a unique way. As discussed by our own Andrea Shearon, Kasumi’s loyalty mission deals with grief and loss with remarkable rawness and tangibility. It’s the best, bravest, and most bittersweet love story in all of Mass Effect, primarily because of the fact that Shepard isn’t even involved – instead, they’re a proxy for us speaking to a grieving friend. 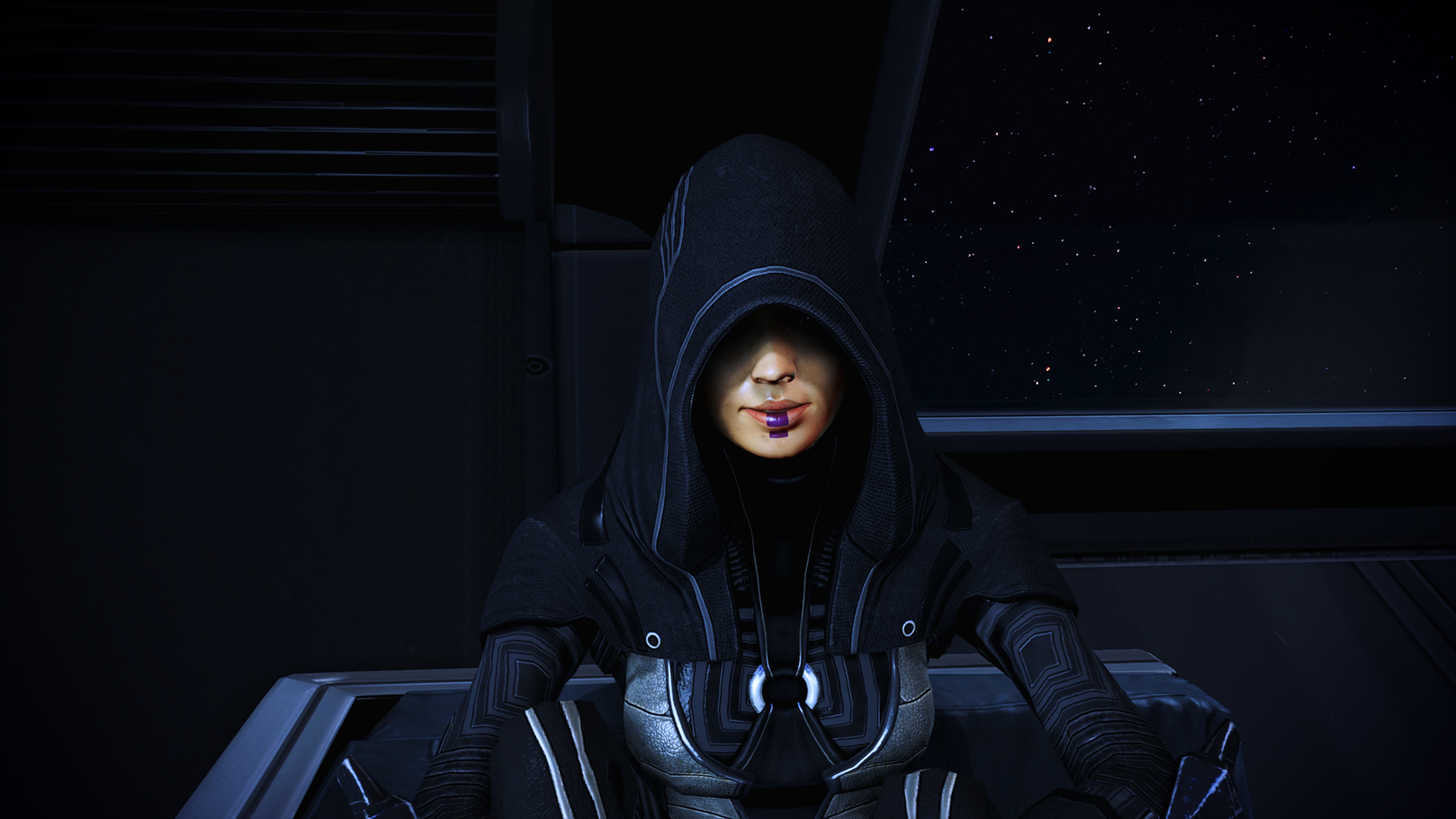 “Kasumi’s big heist mission is 100 percent based on her desire to connect with her dead lover, even though it seems like you’re there to steal technology from a Bond villain,” Turner tells me. “Not to say that these things weren’t true for the other Loyalty missions, but for the rest of the cast, Loyalty missions were more about fleshing the companions out and offering the player a chance to influence them than about getting to know the companions themselves.”

Turner’s perspective here is not just fascinating – it provides crucial insight into why this loyalty mission in particular works so well. For anyone that’s been through something similar to Kasumi, it’s a delicate way of probing and articulating feelings that are usually difficult, if not impossible, to openly discuss in real life. It would feel cheap to complete this mission and for Kasumi to turn around an hour later and say she’s into you – instead, you learn about her pain and how she can live with it without ever truly recovering from it. It’s a work in progress that will never be complete, which sounds defeating at first, but is ultimately uplifting when you consider that it will continue improving, slowly but surely, forever. Of all the characters in the game, hers is the relationship that feels most believable, and it’s the one that I feel an enormous amount of people will value the most after playing through Legendary Edition.

“I think my favorite [character] is Kasumi,” Turner explains. “She is a tonal change from Mass Effect’s generally serious and special-forces tone. As a master of a world Shepard barely gets to see, Kasumi can comment on Shepard’s world as an outsider of sorts, which allowed me to look at Mass Effect’s tropes from a different angle. The ending scene to her Loyalty mission never fails to get me all misty-eyed, even though I wrote it… hats off to the amazing cinematic design and animation crews for that one.”

For what it’s worth, another ex-BioWare developer I spoke to a couple of months ago had the following to say:

“Jay Turner did a tremendous amount of incredible writing on Mass Effect, among other BioWare work, much of it never making it into the game. He wrote the first DLC missions for Mass Effect 2, including Kasumi and Zaeed. He has a deep respect for the player’s sovereignty of choice, an encyclopedic knowledge of the universe, and I’d love for him to have a crack at leading the narrative of a Mass Effect title.”

After speaking with Turner and revisiting Legendary Edition, I can’t help but agree.

How To Get Into Esports During Coronavirus Quarantine

The new Dune board game is quick and merciless