Killing Nazi zombies is really, really fun. I was playing Zombie Army 4: Dead War last night, and as the killcam showed the bullet from my sniper rifle pierce the testicles of a rotting and resurrected Nazi, I let out a little chuckle. I’m a big fan of zombie games and movies in general, but there’s just something better about a Nazi zombie. I think it’s because Nazi zombies are like a bad guy 2-for-1 sale. Zombies are bad and Nazis are bad – and together they’re even worse. So, what exactly makes them such good villains?

To start, I think it’s worth looking into the history of zombies. They have a fascinating and troubling origin in popular culture – they’ve frequently been used to convey cultural fears. Popularised in American cinema and rooted in American perceptions of Haitian culture at the end of America’s occupation, they’ve been used to symbolise racial tensions, Cold War fears, capitalism, and AIDS. Seriously, watch zombie films from specific decades and you can learn what American society was afraid of at the time. George A. Romero’s Night of the Living Dead is all about the Civil Rights movement and the Vietnam war, it was revolutionary at the time. 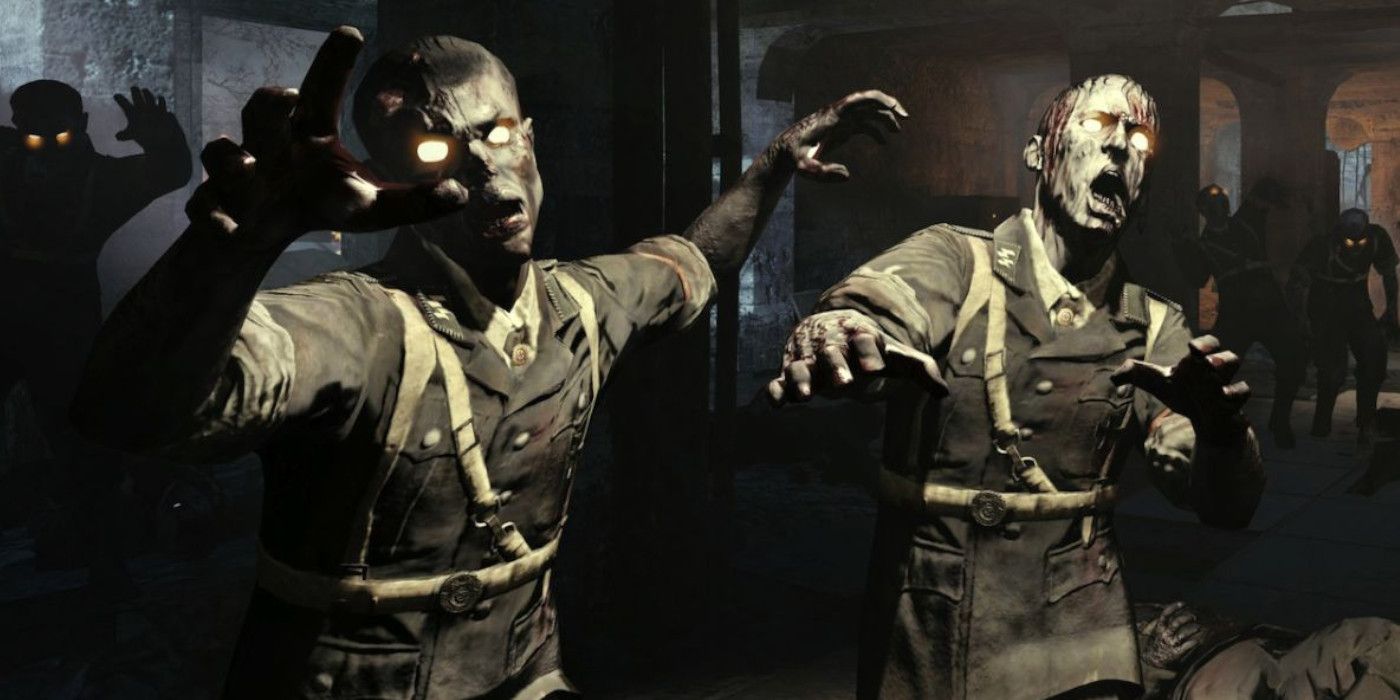 The reason zombies are so good at being the vessel for fear is because they’ve been constructed to be a universally loathed villain – they’re gross, rotting flesh sacks that want to eat you. They’re also completely deindividualised, vast hordes that can’t be reasoned with. This combination of factors makes them deliberately impossible to sympathise with, which in turn makes it easy to place any cultural fear onto them. This is used to make zombies serve as an enemy everyone can rally against. Much like hostile aliens in sci-fi, zombies give humanity a common goal to rally against, one that forces people to set aside differences and team up. Obviously, humans can still turn on each other, as Days Gone, The Last Of Us, and The Walking Dead all show, but they still have zombies as a common enemy.

Because zombies so perfectly embody “the enemy” and are also shown as consciousless, aggressive husks without a shred of humanity left, video games can use them as guilt-free enemies to kill. It’s a bit weird that Nathan Drake cracks wise as he mows down hundreds of people in Uncharted, but there’s no narrative dissonance in zombie games, as you’re not killing people or animals, you’re killing empty shells that everyone hates. That means killing in zombie games can be as elaborate and fun as the developers want them to be, like in Dead Rising. It’s really fun crafting weapons that burn, zap, and slice zombies into little pieces, because we feel absolutely no guilt in it. Even though running over pedestrians in GTA is fun, we all have a little voice in our heads reassuring us we’d never do this in real life – at least I hope we all do. But with zombies, that voice cackles and yells “kill! Kill! Kill!”

Now, if you’re thinking that an entity that is entirely built around being fun and desirable to kill, while simultaneously having cultural fears easily transposed onto it is a potentially dangerous propaganda tool, you’d be correct. Fortunately, Call of Duty: World at War used zombies to very literally embody Nazis: racist fascists who are universally loathed – unless you’re a Nazi, that is. Unlike the treatment I gave zombies, I’m not going to do a whole deep dive into why Nazis are fun to kill in games – it’s because they’re Nazis, duh. 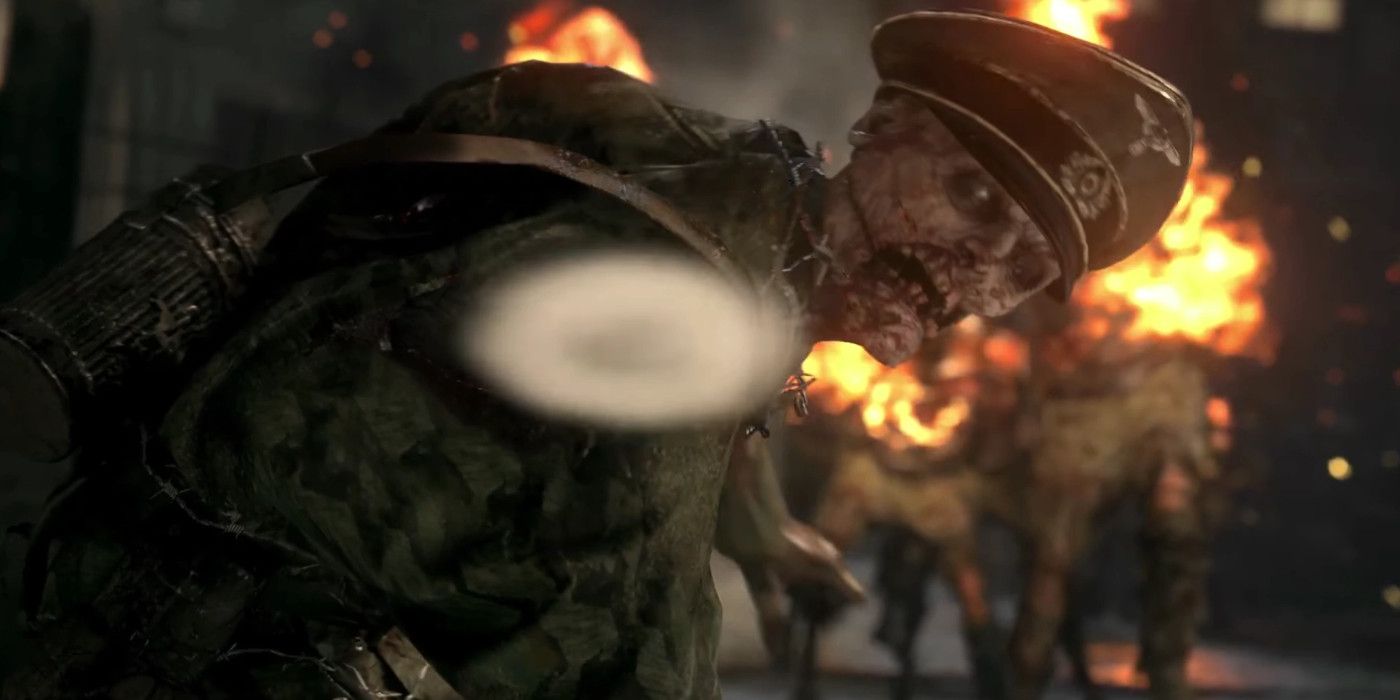 Combining a vessel for abstract hatred and fear with possibly the most despised group in history was really a stroke of genius. World at War by no means invented Nazi zombies, but it certainly propelled them into the spotlight more than anything had before. I spent hours playing on Nacht der Untoten with my friends, gleefully shooting Nazi zombies in the head, slashing them through barricades, and lobbing grenades at them.

Zombies quickly became an integral part of CoD, so much so that the initial lack of them in Advanced Warfare generated so much backlash, Activision had to get Raven Software to develop a zombies mode. The Nazi element of zombies is also crucial for fans of the mode. There was an outcry when Call of Duty WW2 dropped swastikas from the zombie’s aesthetic, opting to replace them with the iron cross instead. This was done to circumvent censorship in Germany, where nazi symbolism has been banned – for obvious reasons –  but it still left international fans unhappy. People really, really enjoy killing Nazi zombies.

Nazi zombies combine two of gaming’s biggest bad guys to great effect. Whether they’re in CoD, Zombie Army, Wolfenstein, or Uncharted, Nazi zombies give players a truly fun, guilt-free killing experience. Next time you’re watching a zombie movie or playing a zombie game, try and figure out what fears they’re being imbued with. It will reveal a lot about the intention behind the artwork.

Is Escape From Tarkov coming to PS4? Latest news and updates

Gears 5 changes what it means to be Gears of War