I'm always looking for new ways to play Skyrim. I've already talked about the time I decided to play it as an NPC, role-playing as a cabbage-picking serf with no desire to be an adventurer. This time, however, I thought I'd try something a bit more exciting. When I play Skyrim, I usually focus on bows. I like being sneaky and fighting enemies at a safe distance. I'll never get bored of the slow-motion kill camera following a well-placed arrow as it soars gracefully through the air and lodges itself in a bandit's forehead. But this time I didn't want to use any weapons at all. No bows, no axes, no swords—just magic.

I've experimented with magic in Skyrim before. If I'm playing as a melee character, I usually put a sword in one hand and a Destruction spell in the other. A quick blast of fire to soften a monster up, then a swing of the blade to finish them off. But this time I wanted to roleplay as a mage who finds the idea of hitting people with lumps of metal terribly unsophisticated. A pure magic user who doesn't even carry a sword in her inventory, let alone wield one. I wondered if it was possible to play—and, more importantly, enjoy—Skyrim this way. Is it possible to get through a dungeon with spells and spells alone?

I escape Helgen, ignore my destiny, and head straight for the College of Winterhold. Not only are the quests here tailor-made for a mage character, but it's a nice way to fill your spellbook with some tasty incantations early on. I join the college as a student and get myself tangled up in a story about a magical artifact called the Eye of Magnus, which has the power to destroy the world. But I don't really care about that. My character just wants to practice her spellcasting in the monster-filled crypts these quests will inevitably send her to. In my head, all she cares about is becoming a more powerful mage. World be damned. 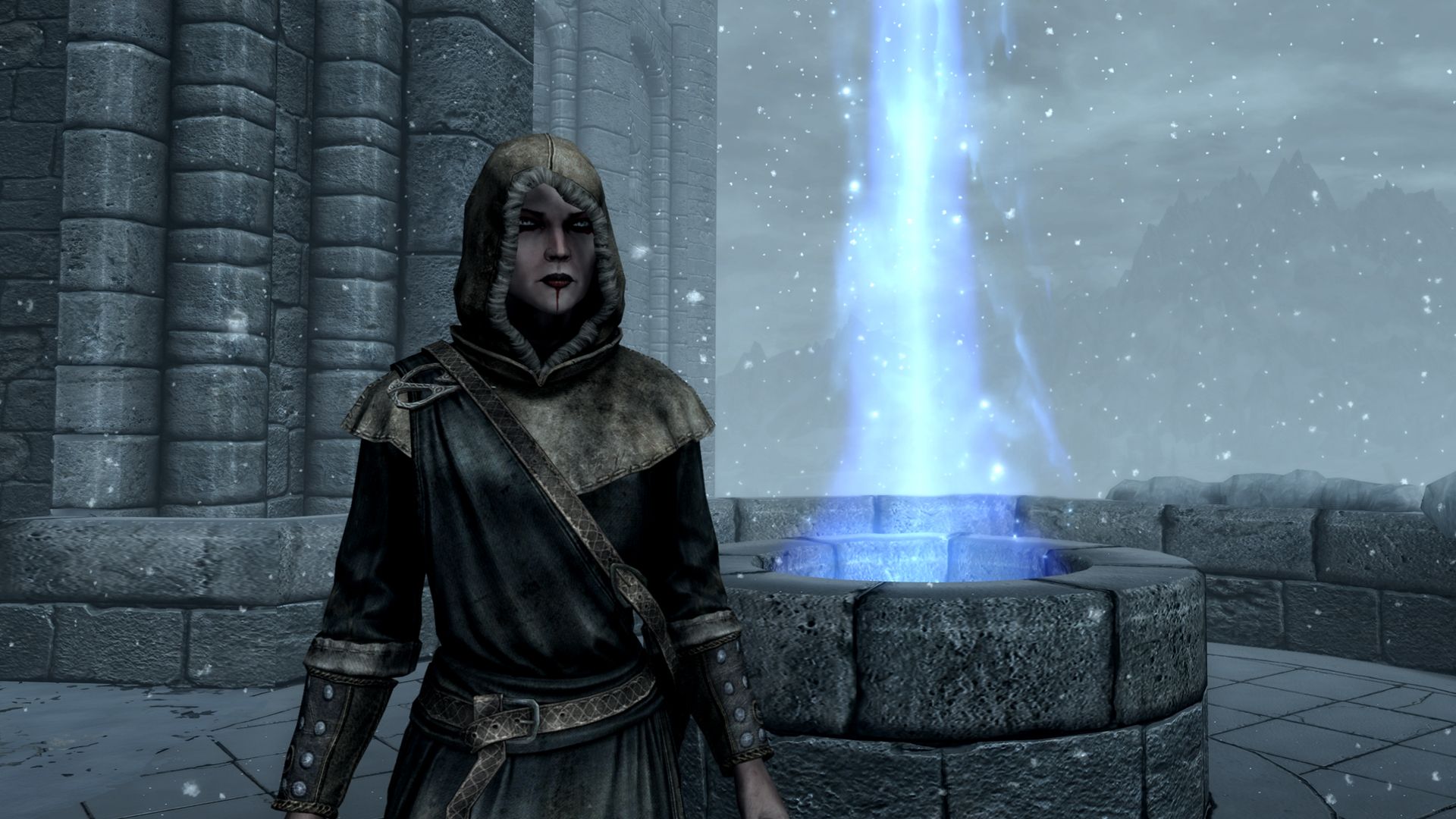 It's hard work. The main issue is that I'm low level, so my magicka meter drains incredibly rapidly. This means I spend a lot of my time in dungeons frantically backpedalling away from enemies, waiting for it to fill back up so I can resume attacking them. I'm wearing novice robes, which make my magicka refill 50 percent faster, but it's still painfully slow. It also takes a while to kill enemies, whether I'm toasting them with Flames, zapping them with Sparks, or hurling Ice Spikes at them. Before you start levelling up your Destruction skill and unlocking perks, being a mage in Skyrim makes you feel woefully underpowered.

It's frustrating, and at times I miss just being able to just batter monsters with an axe. Managing stamina is a lot easier than managing magicka. But it's also a very satisfying dungeon crawling experience. I love making my way through these dusty old halls, fighting back giant spiders and the undead with nothing but my bare, flame-wreathed hands. The kill camera is pretty fun too, showing you a cinematic angle of your mage as fire streams from her hands and melts her unfortunate target. Spellcasting in RPGs can often feel somewhat flimsy and lightweight, but in Skyrim you get an intense feeling of power. 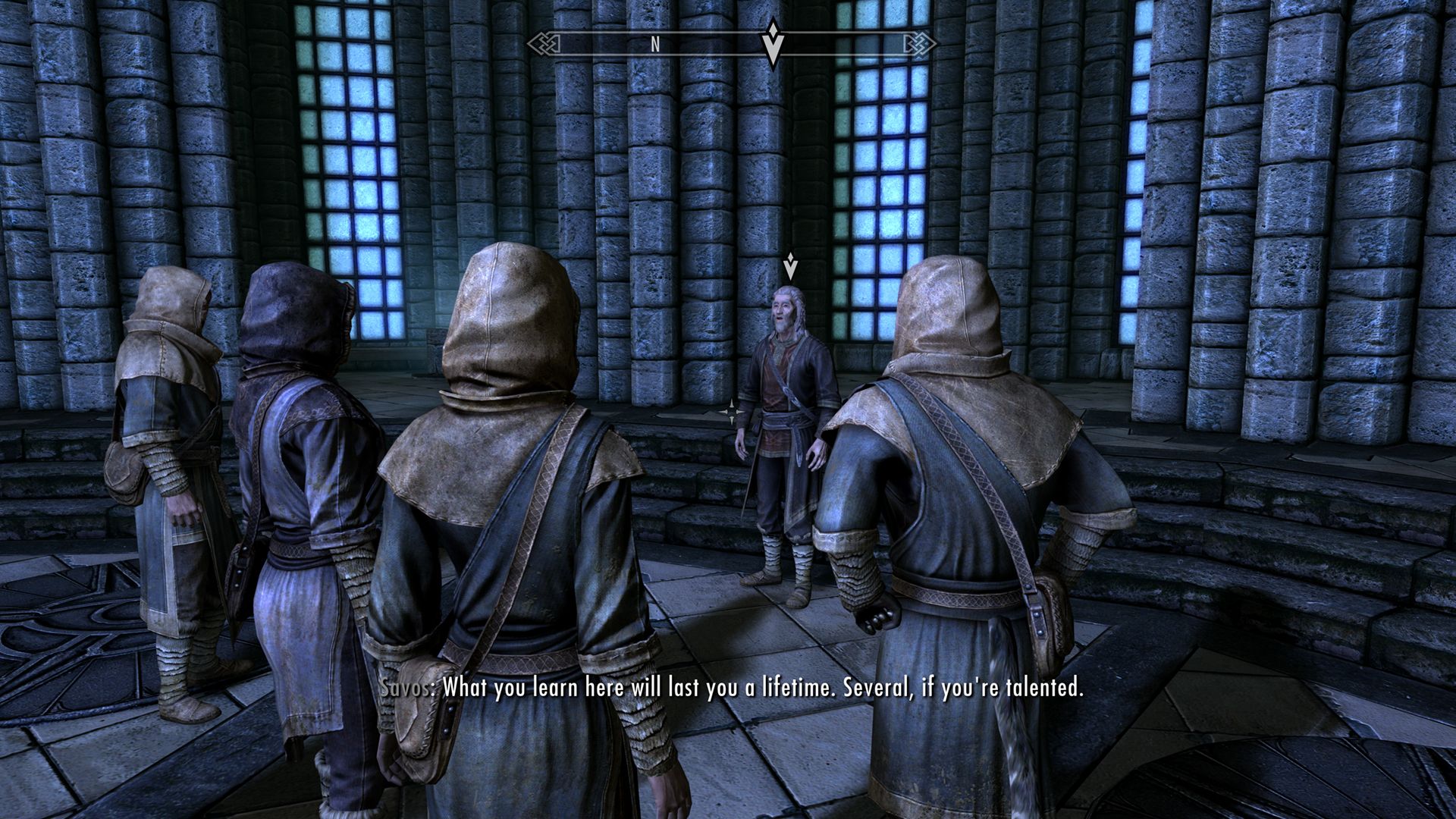 As my Destruction skill increases, and I start unlocking spell-boosting perks, being a magic-only character suddenly becomes a lot more fun—and a supremely powerful play style. I'm able to increase the base power of my spells, and reduce the amount of magicka they use up. Frost spells can now paralyse enemies, and flame spells make people flee in terror when their health dips below a certain point. Then I start casting more powerful spells like Ice Storm, which lets me conjure up a deadly, freezing blizzard, or Wall of Storms, which I can use to create a barrier of electricity that shocks anyone who crosses it.

Playing as a pure mage is the most fun I've had in Skyrim for ages. You just have to get over that initial hump, where all you have are some shitty spells, a shallow pool of magicka, and basic gear. I won't blame you for giving up. It's quite tedious at times. But now, with a spellbook bursting with powerful magic and an enchanted robe that grants me +50 magicka and +100 percent magicka regeneration, shooting people with arrows and whacking them with sharpened chunks of iron feels horribly boring and, dare I say, uncivilized. I'm an altogether better class of adventurer now. It's a mage thing. You wouldn't understand.

Bravely Default 2 Isn’t As Difficult As It Appears, You Just Need To Adjust Your Strategy