Home » Reviews » Spider-Man: No Way Home Has The Best Depiction Of Spidey Sense

Spoiler warning; spoilers for Spider-Man: No Way Home's ending and final scenes below. Whether you’re looking for a big cry or to see Tom Holland become the Spider-Man he was always meant to be, there are plenty of moments to love in No Way Home. One of the most unexpected highlights for me and something I couldn’t stop thinking about as I left the cinema was finally getting to see the MCU’s full depiction of Spidey Sense, and discovering that it’s actually the best version we’ve ever seen. Sorry Spider-Verse, I was rooting for you too.

If you’ve not seen No Way Home but are still somehow interested enough in Spider-Man to read about Spider-Sense adaptations, that’s weird, but I guess I’ll set the scene for you. Peter Parker has rounded up all of the villains and offers to use science to fix their problems by inventing devices that keep them in control of their power. 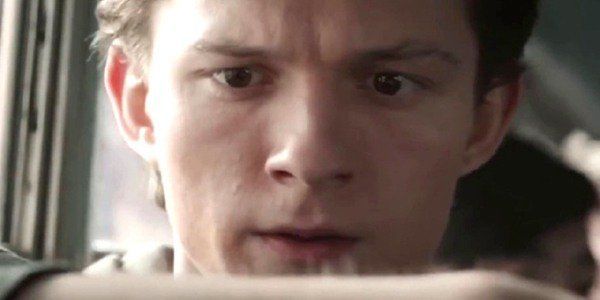 After curing Doc Ock and Electro, things seem to be going well. But suddenly, Peter reacts to something unseen and unheard. His, ugh, Peter-Tingle warns him of some kind of imminent danger and we get to see the final stage of Peter’s Spider-Sense, an arc that started in Infinity War and comes to a conclusion here. We see the sense represented to the audience as a high-pitched ringing and muffled voices as we watch Peter search for the hidden danger.

The way the scene is shot is one of its biggest strengths, closely following Peter’s face in an unbroken tracking shot as he walks between rooms and has to trust his sense to figure it out. There are Twitter accounts dedicated to great Marvel shots, which are mostly just a character looking at a green screen, but damn if this isn’t some great cinematography.

There’s one key difference that separates this version of the SpiderSense and the others – Peter doesn’t know what’s wrong. You can tell from Peter’s expression and repeated calls out to May that, even if he knows something is about to happen, he doesn’t know what’s about to happen. It makes Spider-Sense much more layered and unreliable, like Peter isn’t fully in control of his powers even after Far From Home’s ending. Similarly to how No Way Home ends with Peter is in control of his own destiny and making his own choices, he’s shown here to finally have a grip on his abilities.

In Sam Raimi’s trilogy, this power is presented as more of a slow-motion mode that lets Peter dodge any threats around him, but there are a few instances where it’s more of a warning of what’s about to happen, like the scene in Spider-Man 2 when he dodges a car.

The Amazing Spider-Man goes one step further by making it more like an instant reflex. Peter is able to catch flies and react to movements without thinking, occasionally slowing down time like the admittedly awesome scene in The Amazing Spider-Man 2 where he saves citizens from being electrocuted in Times Square.

Then we have the Insomniac Games which game-ify it into a dodge button. There are a few scenes in the game where it shows up and has the traditional lines above Peter’s head, but it’s pretty close to the films as being more of a reflex than anything else. To be fair, the fact that the player has to dodge it themselves makes it a bit more interesting than just the cookie-cutter bullet-time we’ve seen on the big screen.

A close contender for best Spider-Sense is Spider-Verse, which should come as no surprise considering it’s the best superhero film of all time. In Into the Spiderverse, it’s shown as more of a sense between Spider-people, distorting the screen and letting them recognise one another’s powers. It definitely fits that film’s themes but we don’t get to see it used much in action.

As much as I love the instant recognition between Spider-people thanks to the sense, No Way Home’s interesting take on a power we’ve seen so many times before makes the apartment scene one of the most interesting moments in a film that’s absolutely stuffed with them.

One of the reasons why this Spidey-Sense is so unique is the way it’s been built up across several movies. The MCU took a different approach to Spider-Man’s origins and basically didn’t show them, which meant no whacky “woah look at my powers” moment for this Peter. Instead, some fans weren’t even sure if this Peter had the sense at all. Diehard webhead fans were practically combing through Civil War to find evidence that this Peter Parker had it before it finally showed up briefly in Infinity War with a few raised hairs.

After that, we saw him use it dramatically in Far From Home to take on Mysterio, in what is a fantastic scene, but it was clear he didn’t have much control and had to tell himself to listen to it and close his eyes to take control of it, but in No Way Home Peter is the one in control of it and can follow it without needing to let it take control of him. It’s a great character arc for one of Spider-Man’s most well-known abilities.

No Way Home did a lot to surprise me and I now consider it one of my favourite films of all time, but I never thought something as seemingly cut-and-dry as the Spider-Sense can leave me with my mouth wide and my heart racing.

Here's What Death Stranding Would Look Like As A PS1 Game

Ghost of Tsushima review: PS4 triumph is more than the sum of its parts