Like millions of others, one of my defining memories of the original Tomb Raider involves dinosaurs. Their presence in the 1996 classic was iconic, cemented in the zeitgeist of a generation partly defined by Lara Croft pulling off backflips as she fired her dual pistols into the snout of an encroaching, razor-toothed lizard. Tomb Raider: Anniversary saw the prehistoric beasties return with a graphical upgrade and more nuanced combat mechanics, but the majesty of their polygonal ancestors remains the shining example of our beloved adventurer taking on creatures that should have long surrendered themselves to extinction.

While it’s comical today, fighting dinosaurs in Tomb Raider terrified me as a kid. The PlayStation’s limited hardware meant that three-dimensional environments couldn’t be rendered in their entirety, so huge shrouds of fog were used to hide blemishes in the geometry as small pieces of each level loaded in as you approached them. Such limitations were what turned Silent Hill into a hive of melancholic dread, but they also gave Tomb Raider’s Lost Valley an unintentional horror that sticks with me all these years later. The game’s opening involves hopping around caves and duking it out with tigers and bears – which I can totally deal with, easy peasy – but dinosaurs are another matter entirely.

Lost Valley is a beautiful place, christened by luscious greenery and crystalline waterfalls that define it as a natural wonder untouched by human civilization. However, this also means that wildlife has been left to exist without intervention, away from events that have reshaped the outside world in untold ways. So when Lara Croft waltzes in hoping to stumble across untold treasures, the local occupants aren’t too thrilled to see her. A towering dinosaur screeches out of the fog, rushing towards our heroine with bloodlust in its eyes. Your instinct is to keep shooting, firing blindly as you hope this creature goes down without a fight. It doesn’t, especially when smaller ones join the ranks and aim to make your day a living hell.

It’s goofy, terrifying, and touches on what makes Tomb Raider so special, something that has been lost as the Survivor trilogy opted for realism over fantasy, a double-edged sword for Lara Croft’s future in many ways. I love the 2013 reboot and Rise, while Shadow is just okay – but their dedication to realism and a narrative that far too often surrenders itself to melodrama means that more fantastical moments are abandoned entirely. I miss this direction, doubly so because I think Survivor’s execution of overall tone and character development would still accommodate the presence of prehistoric animals and more abundant wildlife – if anything, it would further emphasize its finer qualities.

Rise comes alive when you’re given the freedom to explore its environment of your own accord, making discoveries and doing battle with bears you come across naturally. It’s tiresome when the generic plot shifts into overdrive and I’m forced through endless firefights with faceless mercenaries. I don’t care who Trinity are and if my mother-in-law plans to betray me, I care about being a raider of tombs, uncovering ancient civilizations and paying respect to those long buried by unearthing artefacts and murdering dinosaurs. The reboot trilogy has some of these elements in abundance, but the absence of others cements where I want to see this series go in the years to come. 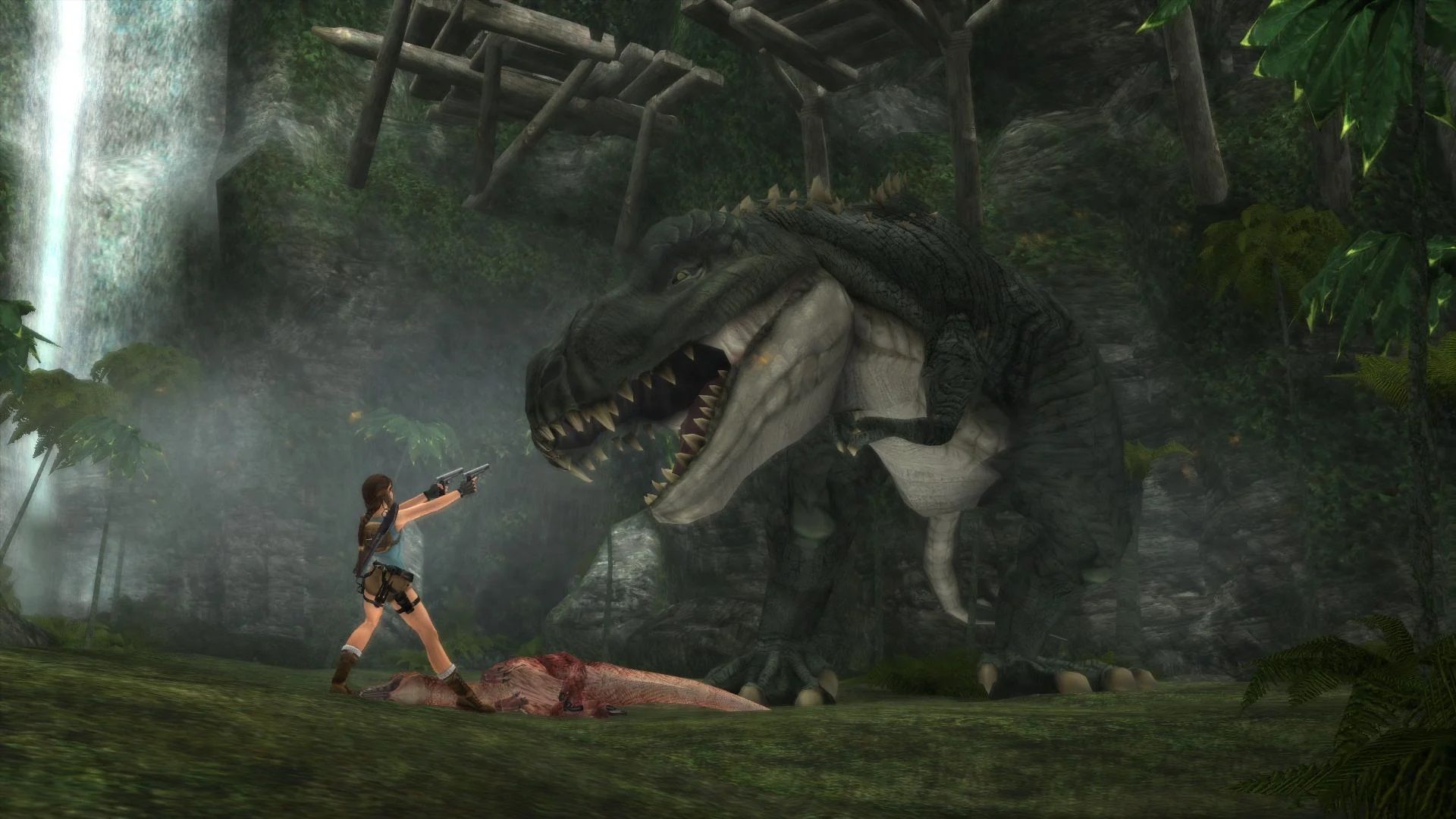 The closing moments of Shadow seem to make it clear that the Survivor days are over, with Lara Croft growing into a fully-fledged explorer ready to leave her traumatic past behind to pursue an ambitious future. As she settles down into her desk at Croft Manor the camera pans out, paintings on the wall teasing potential adventures and glimpses into moments that we’ve yet to experience – a cut ending even reveals Lara receiving a letter from the Legend Era’s Natla. I would love to see Crystal Dynamics naturally link the eras together, having Lara pick up her dual pistols and don her iconic outfit for the first time as she steps into the Lost Valley and does battle with some dinos.

Obviously it would need to be updated to reflect the modern era, with a smaller reliance on sexualisation and an execution of the setting that encourages explorative dynamism in a way where we’re given the freedom to make its world our own. But if Crystal Dynamics can recreate the magic of stepping into the Lost Valley for the first time, having Lara tense up in fear as a massive dinosaur walks into frame before rushing toward her, then we could witness a new era of Tomb Raider that is long overdue. Look to the past to help inform the future, reinvent the series’ finer moments with a perspective of emotional maturity and mechanical finesse that can help this icon shine brighter than ever. Plus, dinosaurs are cool as hell and we don’t have nearly enough games featuring them.