Home » Reviews » Vampire: The Masquerade – Bloodlines 2 has the original’s lead writer and vibe

Vampire: The Masquerade – Bloodlines never had a chance. Released in 2004 in the same window as Halo 2, Half-Life 2, and Metal Gear Solid 3: Snake Eater, it sold fewer than 100,000 copies at launch. Most of its development team was laid off shortly afterward. But over the past 15 years, the PC role-playing game based on the popular White Wolf tabletop franchise has become something of a cult classic. Fans and critics hold up its ambitious story and emphasis on player freedom as evidence that Bloodlines arrived ahead of its time.

Now, under a new publisher and developer, Bloodlines is getting a second chance with an official sequel, Vampire: The Masquerade – Bloodlines 2. Judging from a meaty demo showing during the 2019 Game Developers Conference, the original’s many fans have reason to be hopeful.

Paradox Interactive acquired White Wolf and the rights to the Vampire universe from CCP in 2015. Now the publisher and developer, best known for its collection of high-concept strategy games, has tapped a relatively new Seattle-based studio to build a sequel. Called Hardsuit Labs, the team is best known for its free-to-play shooter Blacklight: Retribution. It has brought on Bloodline’s lead writer, Brian Mitsoda, along with game writer and critic Cara Ellison.

During our demo, Mitsoda underscored that Bloodlines 2 will capture the tone of the original: a mix of noir, personal drama, political intrigue, and humor. The latter features heavily in the demo with a young hermit named Dale Talley, who introduces our character to the game’s world and the life of a vampire. His lighthearted pragmatism elevates the usual exposition dump that starts most games into a fun, surprising conversation — and a helpful primer for somebody new to the franchise.

Bloodlines 2 is set, fittingly, in Seattle. (The game’s internal code name was Project Frasier.) Our character — whom we can identify and specialize however we see fit — is a Thin-blood, a human with new or relatively weak vampire powers. The character is one of many “bloods” to be “born” from an incident called a mass Embrace. A band of rogue vampires converted a crowd of humans in public (including our character), breaking the Masquerade and igniting feuds among the city’s many vampire factions.

The Masquerade, for folks new to the series’ lore, is the first and most important rule of vampire life: to not reveal one’s true powers, strength, and vampiric habits to humans. In the fiction and in the game, breaking the Masquerade gets the attention of rival vampires and faction leaders, who will do their best to cut off our character’s head.

Of course, the rules are a good deal more complicated and fluid than that, which is why our pal Dale has opted to stay safe with the confines of his apartment, living off blood bags and obscure ’90s television reruns. While he stays out of the power struggle, our character won’t take that approach. 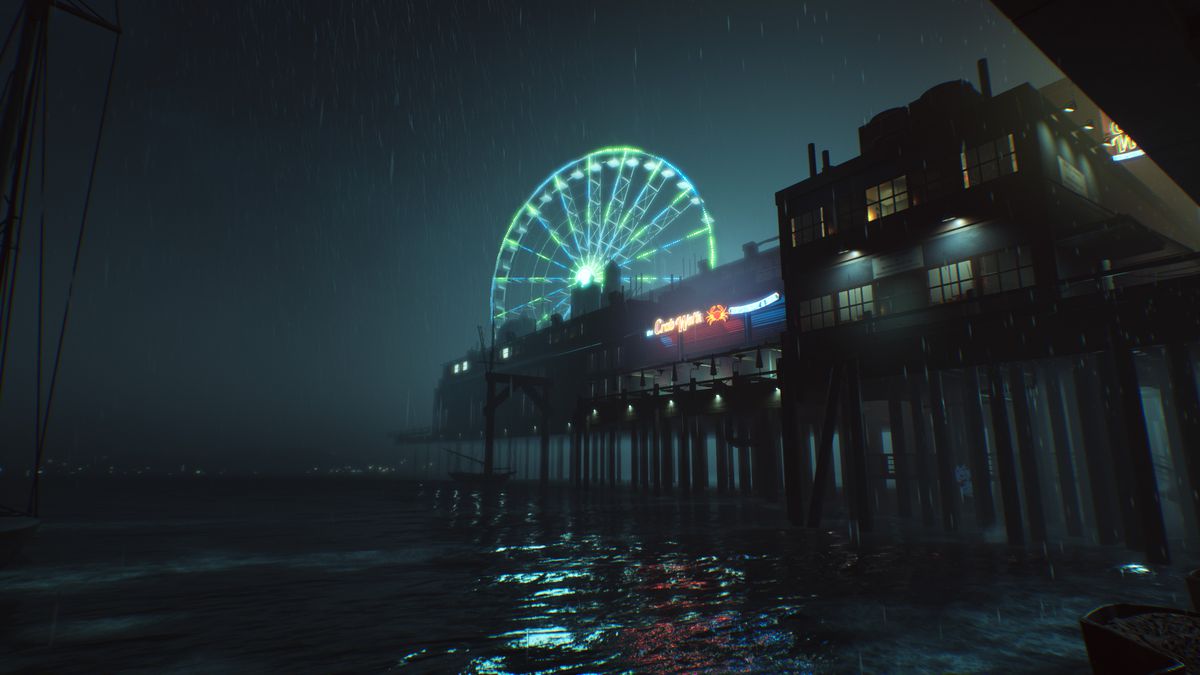 When we finally make our way to the surface, we’re met with the bright, colorful glow of the Ferris wheel on one of Seattle’s commercial piers. It’s impressive just how beautiful a video game of this scope can be, despite coming from a team that, compared to the mega-studios producing franchises like Call of Duty and Assassin’s Creed, is modestly sized. Sure, developers like Hardsuit Labs now have access to more and easier tools than they would have in the past, but I suspect that what truly elevates this game is its art direction.

Bloodlines 2’s story blends horror and noir, like its predecessor did, but its visual style doesn’t rely exclusively on the expressionistic shadows of classic noir or the neon signs of its contemporaries. Instead, it’s full of a variety of lighting techniques, each suffusing rooms and outdoor spaces with different moods. An urban square central to the story has the soft glow of retro lampposts. A Brutalist parking garage exterior is softened by pink neon. The apartment of a recluse has the harsh fluorescent lighting that reveals every stain and fleck of dust that has accumulated over the years. And throughout the world sit Christmas trees and holiday lights, giving scenes an almost trippy splash of color.

To be clear, though, this game is deeply pulling from noir storytelling. As a blood, we don’t know much of anything about the world of vampires, while most characters we meet seem to know a good deal about us. So it’s up to our character to set into the night, leaving behind poor Dale, to get some answers.

As in the original Bloodlines, personal choice is the core of the game. We can kill our enemies, or sneak about using our powers. Ellison explains that we can maximize our seduction abilities and seduce our way through much of the game. We must feed on blood to survive, but even then, we can nibble, leaving our victims alive, albeit drained.

Blood has flavors depending on the emotion of the victim. They might feel rage, joy, delirium, or some other sensation, and by tapping into their veins, we get a bit of that emotion, getting a passive buff. We can even develop a taste for specific flavors of blood, which unlock additional perks that can be equipped like loadouts. 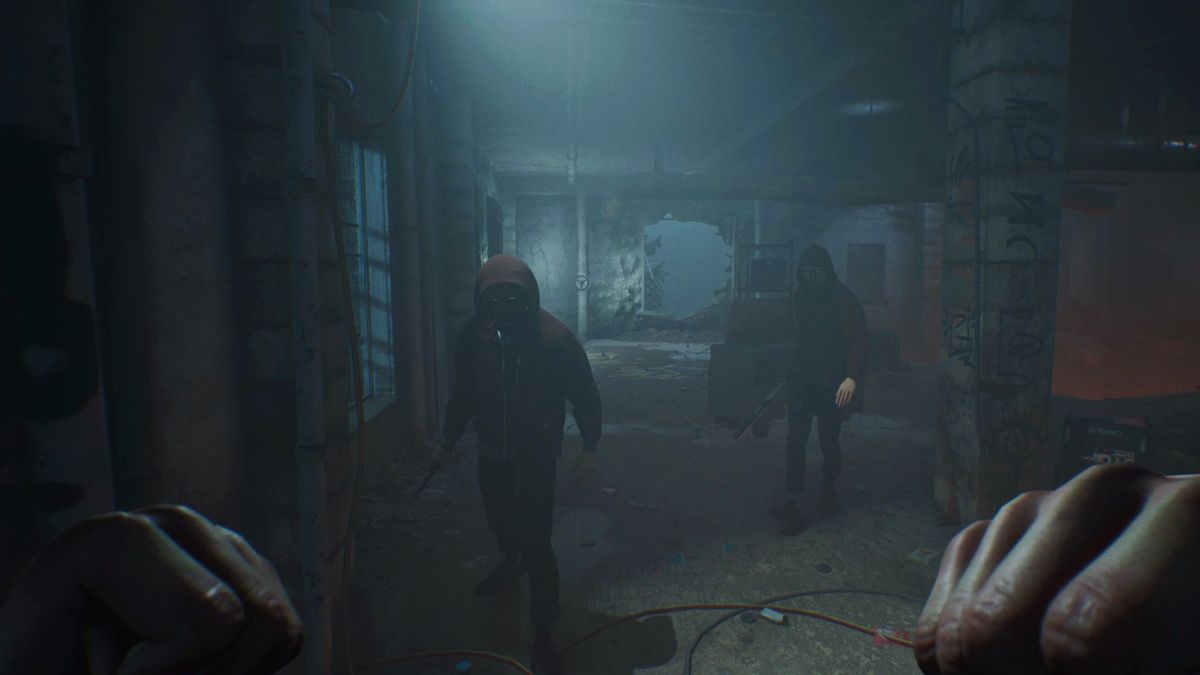 We didn’t get to learn too much about our character in the demo, or from conversations with the game’s creators. Understandably, they’re keeping story specifics hush for now. But Mitsoda and Ellison did expand on the macro and micro directions in which they’re taking the narrative. On a top level, our character’s journey will take them across Seattle, a city once known for its music culture and progressive ideals that’s been overtaken in recent years by big tech companies and billionaires.

Mitsoda said the game’s factions will capture the conflicting wants and needs of the city’s community, both new and old. And Ellison spoke about the more personal level of the story, focusing on the many other Thin-bloods we will meet, people who are struggling to align their new life as a vampire with the domestic challenges and responsibilities of their recent time as humans. These people may still have spouses, kids, and obligations, and the city’s rapid change may affect them both directly and indirectly in unexpected ways. Ellison said it’s the creators’ chance to “explore the space of vampire puberty.” Our character enters vampirehood with the help of Dale and a place to live, but other Thin-bloods aren’t so lucky.

Vampire: The Masquerade – Bloodlines 2 is set for release in the first quarter of 2020, so it’s early to make any real judgments. But the short demo we were shown has tremendous promise, and while it looks like a game from the present, it echoes its ambitious predecessor from the mid-2000s. Asked if the team had considered designing any elements of the game for Twitch and streamers, the project’s creative director, Ka’ai Cluney, stated with confidence that “at no point was Twitch considered in the design.” It’s totally fine, he continued, if players stream the game, and great if they share their unique experiences. But Bloodlines 2 is a game about players making their own choices, imagining their own backstory, and taking their own path.

Maybe this time, the audience will be ready and eager for such an idea.

Sekiro Is Secretly The Best Rhythm Game Ever Made