World War Z is a patchwork of a game, much like the mixed bag of a movie it’s based on. Both game and movie share one standout gimmick: astonishing, often hilarious zombie hordes. Where so many much zombie fiction depicts small crowds of shambling undead, the World War Z fiction depicts zombies like ant colonies. They’re fast, cooperative, and able to swarm in massive numbers.

World War Z, the game, is probably the closest thing we’ll get to a Left 4 Dead 3 in 2019. There are four cities, where I play through linear slices of New York, Jerusalem, Moscow, and Tokyo. Each city has four survivors, and up to three levels to fight through. I start a campaign and queue up with three other players, where I pick a survivor. I’m offered a basic set of weapons, but I will find upgraded weapons throughout my adventure.

Missions are straightforward point-A-to-point-B affairs. At times, I have to gather supplies or set up traps. Other times, I just need to advance to my next destination, slaughtering the undead along the way.

There’s a class system as well, adding a little bit of depth to progression. Instead of learning level layouts, enemy spawns, or strategies to deal with special infected, I focus on unlocking stat bonuses or upgrades. One class, the Slasher, can get health boosts or extra attacks upon successfully killing a chain of enemies, while another, the Exterminator, unlocks boosts to explosive and area-of-effect damage. 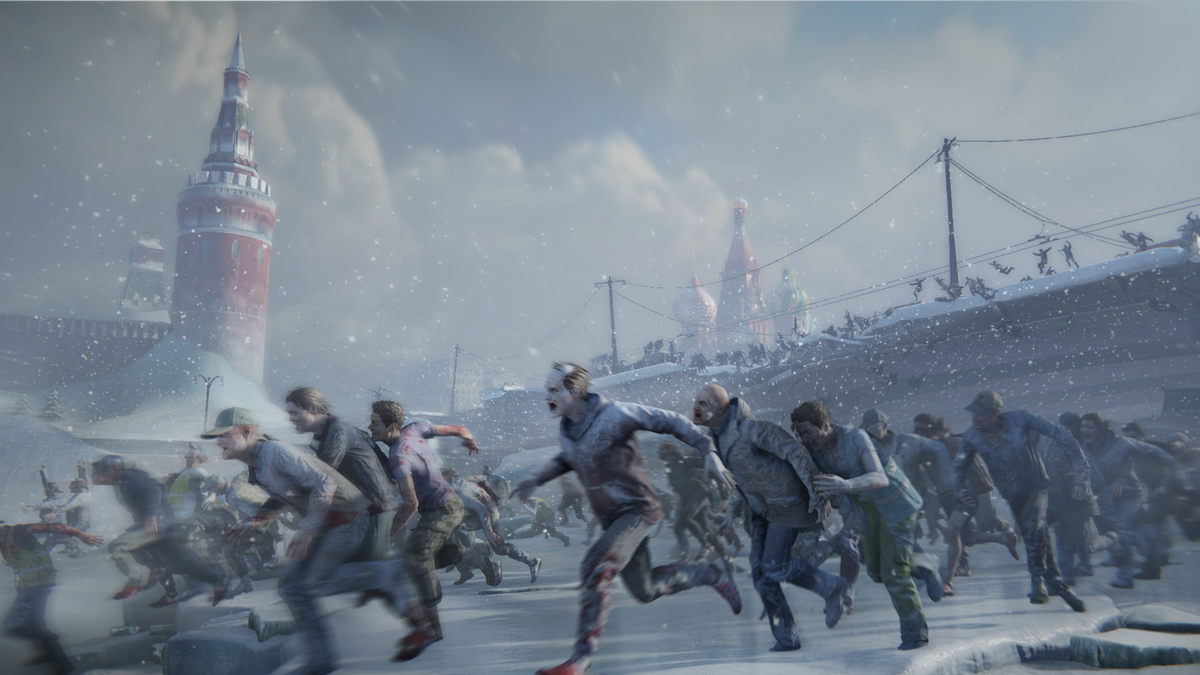 Ultimately, though, I find myself uninterested in upgrading my character and advancing. I have to level as the class, then leave the game, click “campaign,” select “customize,” and then pay in-game currency to unlock the abilities I’ve earned via leveling. It’s frustratingly laid out, and delays my reward enough that it doesn’t feel great.

The game is mired with comparable technical headaches, including connection issues, disconnects, server offline messages, and lobby problems that plague the experience. Sometimes I’m dropped into an in-progress game near the very end of the mission. Instead of smoothly segueing from level to level, I regularly find myself sitting in lobbies between stages. Some missions have an NPC to escort, with no checkpoint system for if they wander off and get swarmed.

These parts of the game — the UI issues, disconnects, and flaws — are off-putting. They never verge into being outright broken, but there’s a dozen little pain points throughout the process that make getting to the good stuff a hassle. It’s a shame, because once a level starts, it doesn’t take long to get to the absolute best part: the zombies.

The zombies, or zeds in World War Z speak, are individually weak and easily dispatched. A single swing from a machete or a couple of bullets will end one. A well-placed explosive will end a bunch. The fun comes when they swarm in the dozens, or hundreds. It’s by far the most visually and technically impressive part of the game. I stopped more than once to just watch in awe the hundreds of bodies rag-doll and hurtle themselves toward my squad, funneling through chokepoints, climbing up surfaces by using each other as a ladder.

There are also special enemies. A bull is a riot gear-wearing cop who charges a survivor, grabs them, and slams them into the ground. A gasbag can be identified by their bright yellow hazmat suit, and upon death, explode and cover my screen with pus and blight. Screamers draw more zombies, creepers jump on survivors and inflict damage, and … yes, they’re basically the Left 4 Dead special infected, but reskinned. Overall, they’re dramatically weaker than special zombies in similar games, and that lets me focus on the real threat: 6,000 angry zombies.

That’s the high point of the game, when zombies move in like a tide. It’s satisfying to pull out a machete and hew my way through waves and waves. Taking them apart is satisfying and gory. I can cleave a zombie in half, take off individual limbs, or blow their middles away in one shotgun blast. At one point, I find myself laughing hysterically as I turn, see a zombie climb a turnstile, and cut him off at the ankles. His feet remain on the turnstile as the rest of him pirouettes off into the darkness, tumbling and rag-dolling down a flight of stairs and out of sight. It’s all a welcome level of cartoonish.

In fact, there’s very little incentive for me to ever stop using the machete. World War Z provides a multitude of tools: shotguns, assault rifles, SMGs, chainsaws, stun guns, grenades. Perhaps if I were playing on the highest difficulties with a core of friends, I would want to use these things. Instead, I just machete. The machete can knock the creeper down before he jumps on me, take a bull out in a few shots, and never runs out of ammo. At times, a character is sobbing in fear that we need to move on now, and I look up from my bloody work, surrounded by corpses, and shrug. Seems fine to me! While it’s relaxing to enter a fugue of chopping my way through the zombie horde, and it’s spectacular to watch them tumble and fumble through set pieces, the rest of the game falls short of that fun. The characters barely banter, mostly barking out action calls or asking for healing. Each level struggles with pacing. There are few times of quiet, building tension. Instead, there are always zombies. The special infected spawn so often that they lose their impact. When I heard the audio cue that a tank was incoming in the Left 4 Dead games, I would break into a sweat. In World War Z, the game will spawn four or five bulls in 10 minutes, and each one is successively more forgettable.

World War Z is the gaming equivalent of a bad horror movie and a big bucket of popcorn, but it could have been more. There’s the glimmer of potential there that raises the question of what would have happened if the game pulled from the book World War Z, and had things like characters and overarching narratives. There’s plenty of space for this game to exist alongside Left 4 Dead, but instead it comes across as a weaker successor.

It’s a shame, because World War Z throws so many interesting ideas at the wall — a half-baked multiplayer mode, 16 survivors with unique story videos, massive hordes of zombies in urban centers, and an ongoing progression system for survivors. Unfortunately, none of it sticks, except the sight of hundreds of angry zombies forming a human pyramid of hate.

World War Z was released April 16 on Windows PC in the Epic Games Store, and on PlayStation 4 and Xbox One, for $34.99. The game was reviewed on PC using a final “retail” download code provided by Saber Interactive. You can find additional information about Polygon’s ethics policy here.

Hands-On With NHL 21’s Retooled Be A Pro Mode