WWE 2K22 isn’t good enough. Review done – come back next year to see how the next one shapes out.

Oh, you’re still here? Okay, I guess I’ll take this seriously. As a lifelong wrestling fan and passionate critic of 2K’s mediocre licensed output in recent years, when 2K20 forced them to take a year break due to an abundance of bugs and glitches I was elated. The quality was so lacking and fan reception so vocal that there was no choice but to take a step back and reconsider what it meant to be a wrestling game in the modern era.

The end result is WWE 2K22, a competent brawler that feels like a substantial improvement over what came before it, but still clings to the past in ways that prevent it from achieving greatness. A conscious effort has been made to update the gameplay systems to resemble nostalgic classics like Smackdown: Here Comes The Pain and WWF: No Mercy, but all the modes and surrounding content still feel lacklustre. It’s also dripping with a cynical approach to microtransactions and live service-esque modes that twist what could have been a brilliant wrestling experience into a glorified mobile game. ‘It Hits Different’ is the big marketing tagline, but I’d describe it as more of a gentle prod.

When first booting up WWE 2K22 one of the first things fans will notice is how familiar it feels. The user interface is swift and sanitised, composed of multiple tiles with gamer flames igniting in the background. Despite a newfound sense of attitude and a greater respect for its source material, this is a game that firmly belongs in the 2K lineage, and isn’t interested in harkening back to the THQ days of banging soundtracks and ruthless aggression. It gets close, but the second I jumped into MyRise it was clear that I was going to be disappointed. 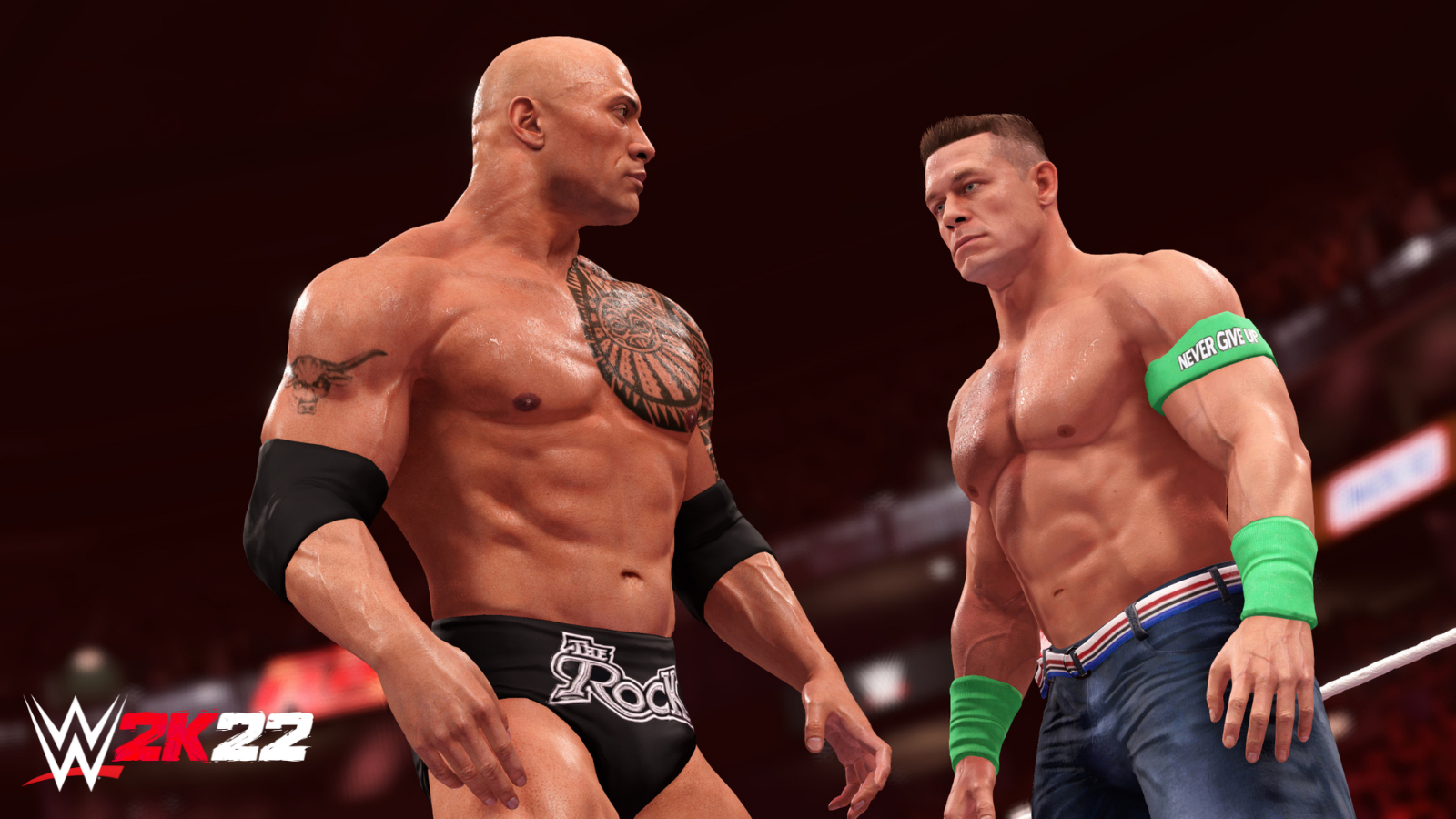 Acting as the game’s career mode, MyRise has you creating a custom superstar before jumping into the world of sports entertainment. You begin in the performance centre alongside other rookies being tutored by Shawn Michaels, but events out of your control soon see you going up against legends and making your mark on the industry. It’s an effectively paced and immersive mode, and the fact that male and female superstars each have their own distinct storylines shows that some serious effort has been put into it. But dodgy voice acting, awful visuals, and a strangely rushed approach to its own presentation prevent MyRise from being what I’d hoped.

The painfully slow customisation menus, even when playing on PS5, also stopped me from bothering to seriously curate my wrestler because it would often take several seconds to load up a single menu. It needed more time, or a lessened obsession with painting WWE as the greatest place on Earth that tries in vain to pretend it cares about the indies or wider wrestling landscape. It’s like a weird, commodified nightmare. Hardcore fans will certainly get a kick out of creating a custom character and having them interact with industry legends, many of whom have provided their own dialogue and play a major role in certain feuds. But for casual players, there are too many flaws here to really lose yourself without compromise. 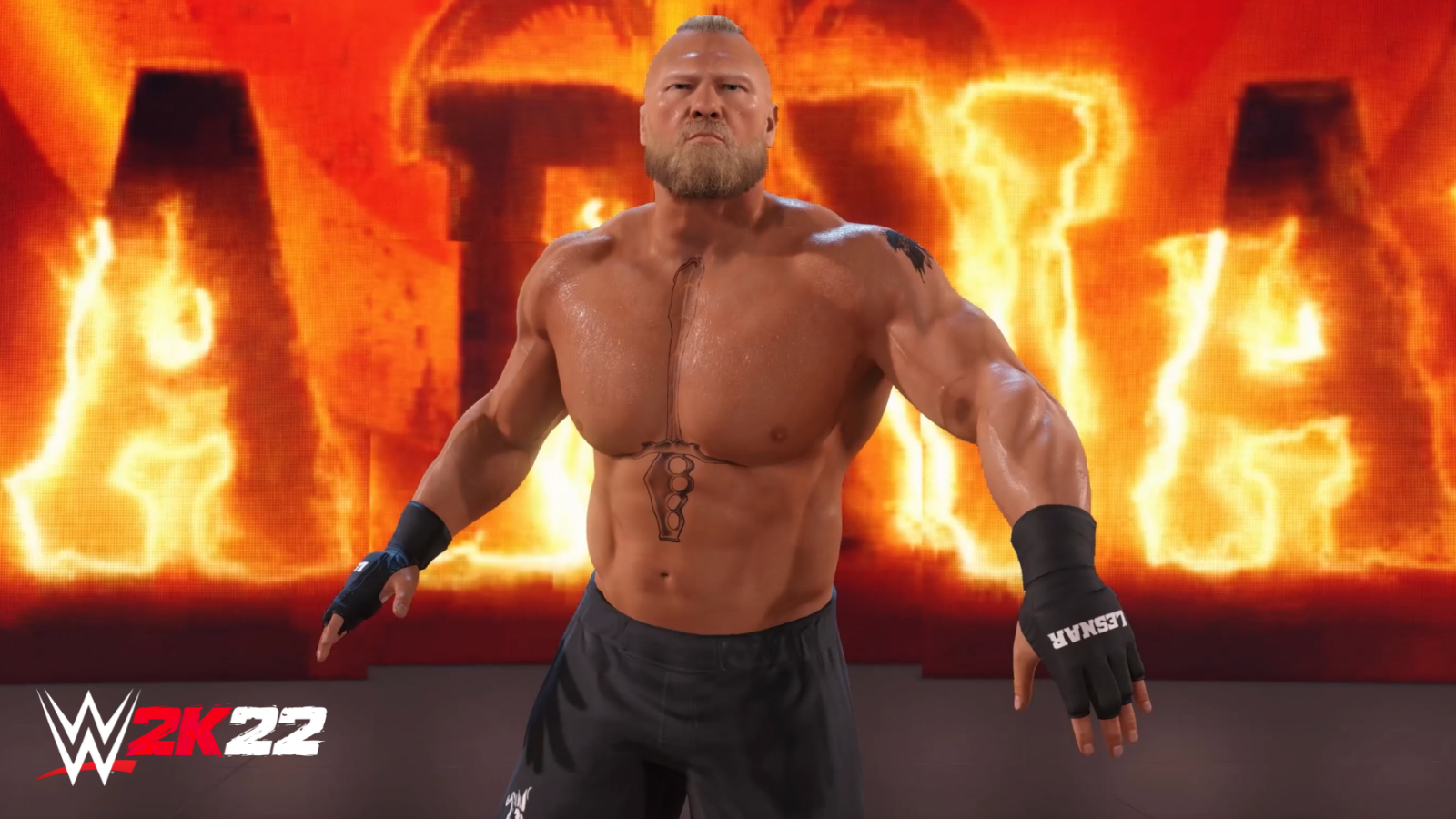 Fortunately the act of stepping into the ring and wrestling is much improved compared to previous games. For years, WWE 2K was obsessed with being a simulator, with needlessly complicated grapple systems and controls that failed to recognise why wrestling is so appealing in the first place. We don’t care about layered combat options, we want quick, easy, and satisfying controls that make performing signature moves and cementing ourselves as WWE legends a breeze. For all its flaws, 2K22 understands that mantra and, for the most part, absolutely nails it.

Now there are only three types of attacks – Light, Heavy, and Grapples – while a short sequence of button presses combining each of them will result in bombastic wrestling moves. You’ll be performing German suplexes and DDTs with ease, feeling like a badass after taking a single glance at the combo screen. Anyone can pick up a controller and hold their own in WWE 2K22 thanks to its simplicity, and this is what I and so many others have been waiting years for. It’s great, with me and my brother playing several matches as our favourite superstars while watching the hours melt away. 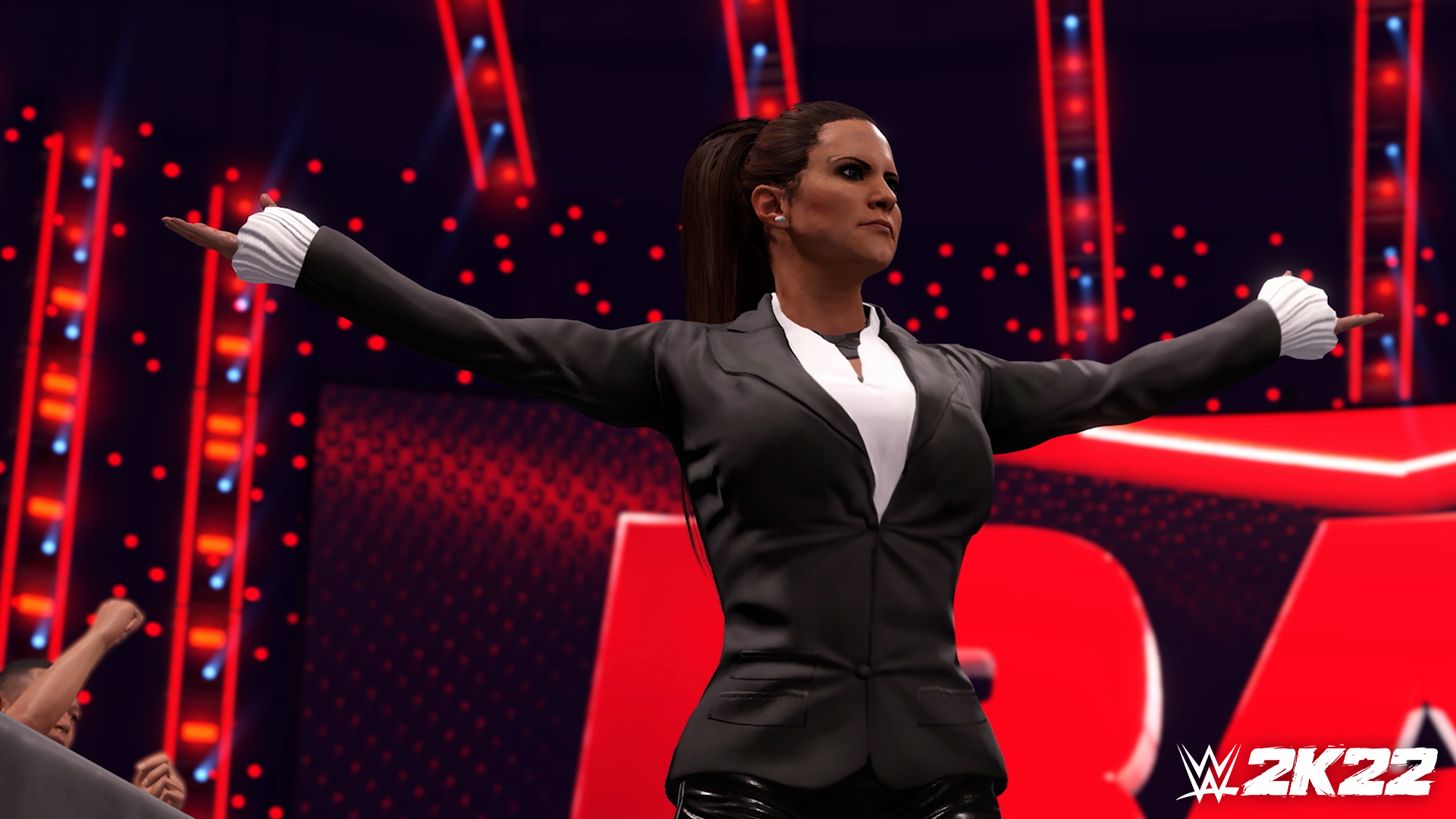 Yet at times it still falls victim to old habits. Enemy AI is unpredictable while pulling off certain actions can often leave you shouting obscenities at the screen. These shortcomings really come home to roost in Showcase Mode, which is both a worthwhile homage to industry legends and a complete distillation of everything WWE 2K22 gets wrong. If you’ve been paying attention to the game’s marketing you’ll know that Rey Mysterio is all over this thing, and that includes Showcase Mode. Here you will play through some of the high-flyer’s greatest matches accompanied by voice over that provides historical context and an added level of drama to every single moment. It’s gorgeous, with in-game visuals often blending with actual footage of the match while you play.

Sadly this spectacle is stifled by gameplay that requires you to perform incredibly specific objectives that ruin the freeform flow of combat. No longer are you chaining together moves in an attempt to deal maximum damage, you are executing exact commands while ensuring your opponent is in a very specific place either in or outside the ring to complete objectives. You can ignore these and just finish the match normally, but that takes the entire point out of Showcase Mode, while also robbing you of potential rewards. I love wrestling, and I love these matches, but I wish reliving them in the context of WWE 2K22 wasn’t so laborious. The game’s brightest spark is snuffed out by its own obtrusiveness. 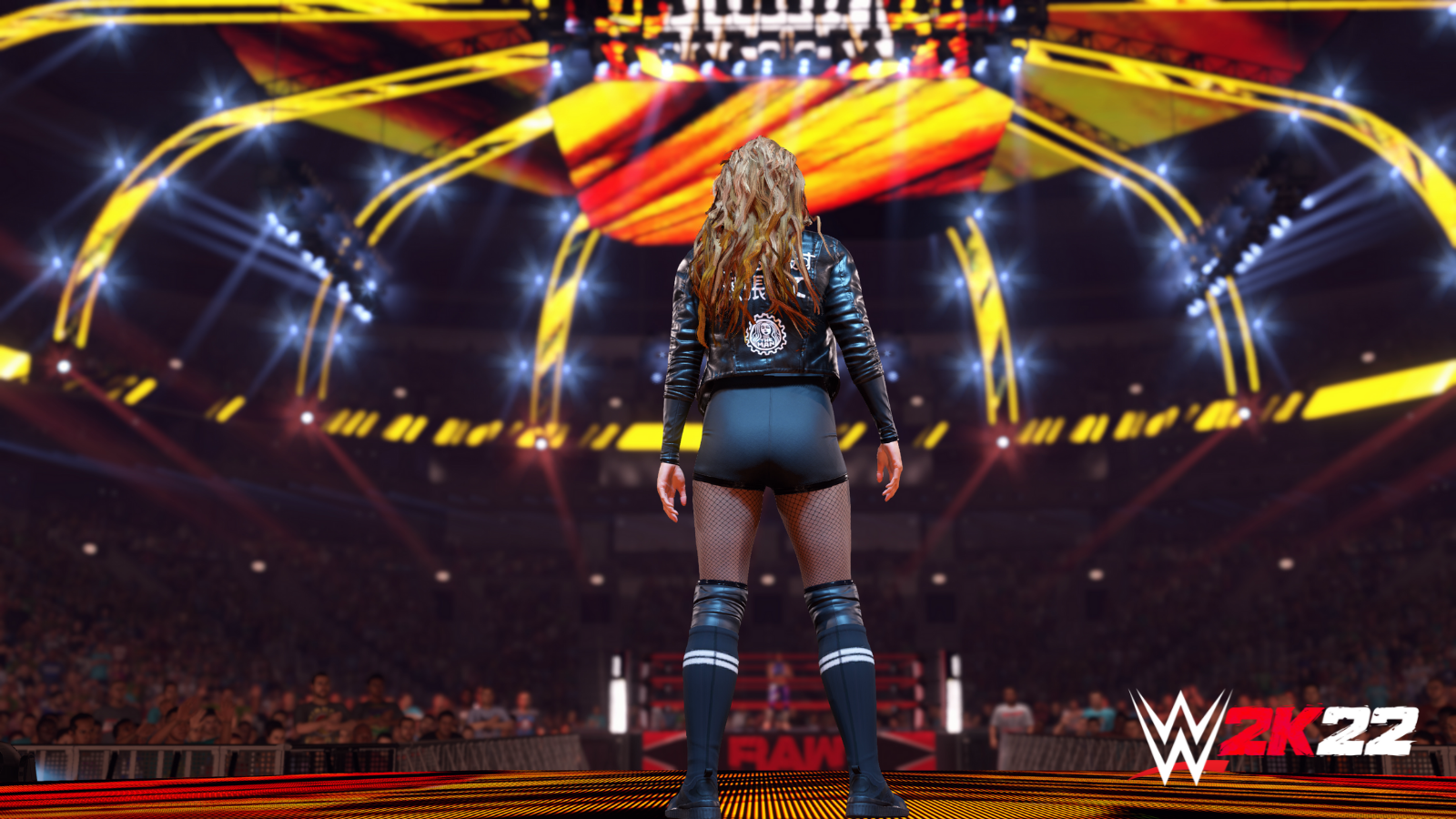 MyGM is a mode that avoids many of these annoyances, but is a little light in content and options compared to previous iterations. You choose a character, brand, and draft a roster before competing against rivals to put on weekly shows and pull in a growing fanbase. There’s a decent amount of depth here as you’re encouraged to build feuds between rival superstars and manage your funds to come out on top both critically and commercially. But once you’ve been through the cycle a couple of times it feels like you’ve seen all it has to offer. It isn’t varied or unpredictable enough to justify repeat playthroughs just yet. Universe Mode is the strongest offering, especially for those who aren’t looking to deal with archaic systems and underbaked mechanics, many of which are so out of place in a game that claims to be a heroic return to form instead of digging up the past.

WWE 2K22 is at its worst in MyFaction. It’s a card-based mode wrought with transparent microtransactions and live-service elements that aren’t subtle in their intentions at all. Your objective is to collect a number of cards and continually compete against AI opponents and other players in order to earn points and build an ever-growing repertoire of superstars. It depends on the rarity of drops and a continued time or monetary investment, with 2K making it perfectly clear that it hopes for the mode to have continued longevity over everything else in the game. Perhaps I’ve been around the block too many times, but I know a time sink when I see one, and no amount of gorgeous card art and rare drops we’ll stop me from seeing this mode for what it is – a pot of greedy corporate cynicism that undermines every positive step forward WWE 2K22 manages to take. It’s basically NBA’s MyTeam, which is basically FIFA’s Ultimate Team, which is basically a licence to print money. Still, it also makes me want to abandon all the good will that 2K22 has tried to desperately express through every facet of its being. 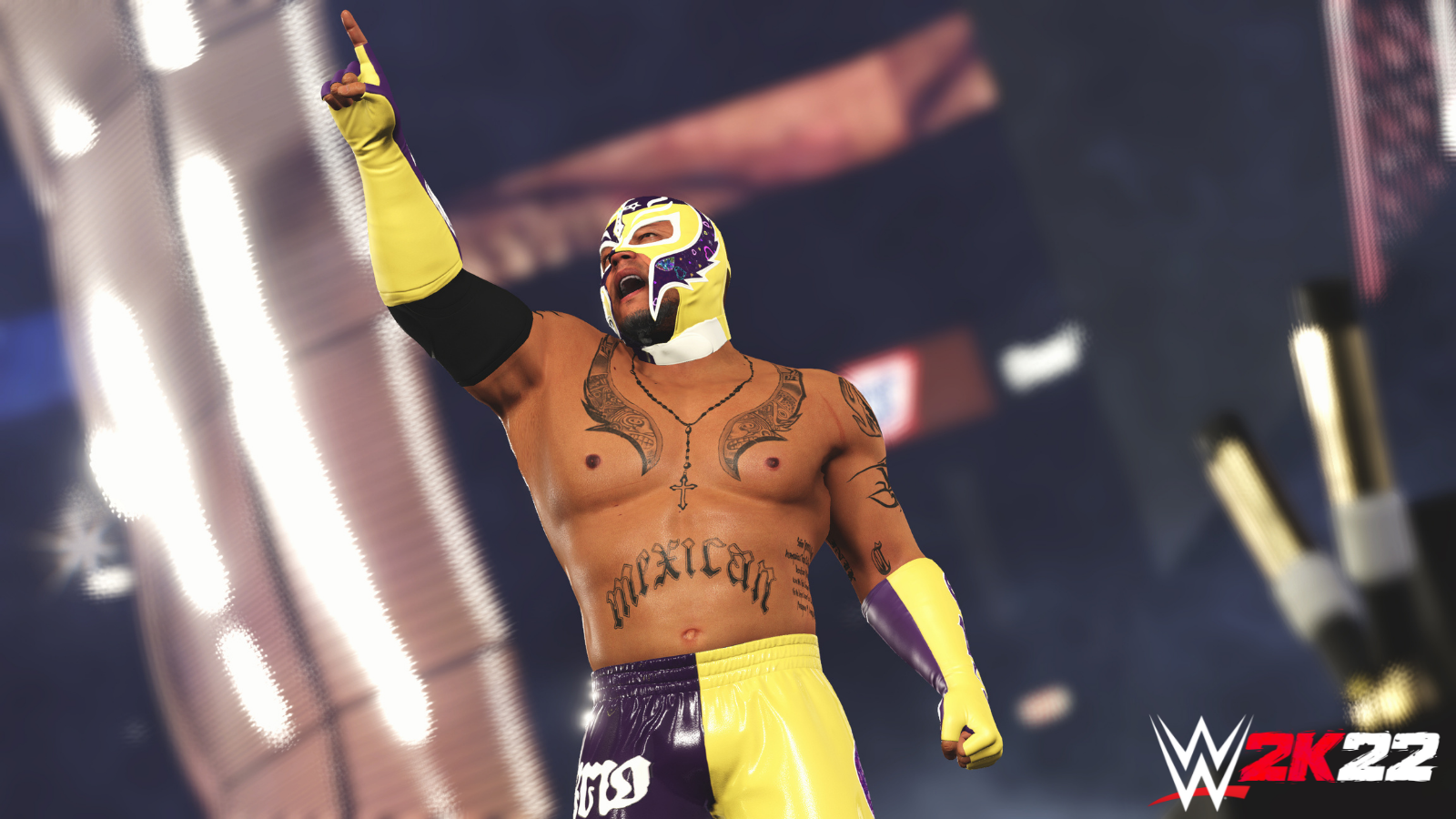 From an aesthetic perspective, WWE 2K22 is a mixed bag. Some superstars look lovely, while others are more akin to bootleg action figures. It’s inconsistent, and as someone who loves to pit random superstars against one another all the time, these glaring disparities surface far more often than I’d like. Given his calibre, I didn’t expect John Cena to look this awful, but he seems to wear a permanent grimace with a figure that doesn’t resemble his real body type at all. It’s weird, and instances like are further compounded by a ring that now feels smaller to accommodate more intense, close-quarters action. You’re up close and personal, so if something looks bad, it’s impossible to avoid.

I wish WWE 2K22 was better. It’s a solid wrestling experience that comes so close to leaving its controversial past behind, but is shackled to old habits so poisonous that their mere presence is enough to drag everything else down with them. But it’s the start of something new, a positive step forward and a sign of things to come if this formula is continually built upon in future annual entries.

A code was provided by the publisher for the purposes of this review.

NHL 21’s Be a Pro overhaul has no staying power

Figuring Out The Meaning Of Names In Disco Elysium