Interestingly, Nvidia did not announce a non-Ti mobile version of the GTX 1660. Based on previous pricing trends, we’d expect the GTX 1650 to slip mostly into systems costing less than $1,100, while the GTX 1660 Ti will likely be reserved for laptops in the $1,000 to $1,600-or-so range. Beyond that lies the mobile RTX 2060’s territory.

These new GPUs should provide a substantial boost over their predecessors. While we haven’t had an opportunity to test any laptops equipped with Nvidia’s latest hardware yet, Nvidia says the mobile GTX 1660 Ti should be up to 1.5X faster than the mobile GTX 1060, while the mobile GTX 1650 can deliver up to 1.7X better performance than the GTX 1050. 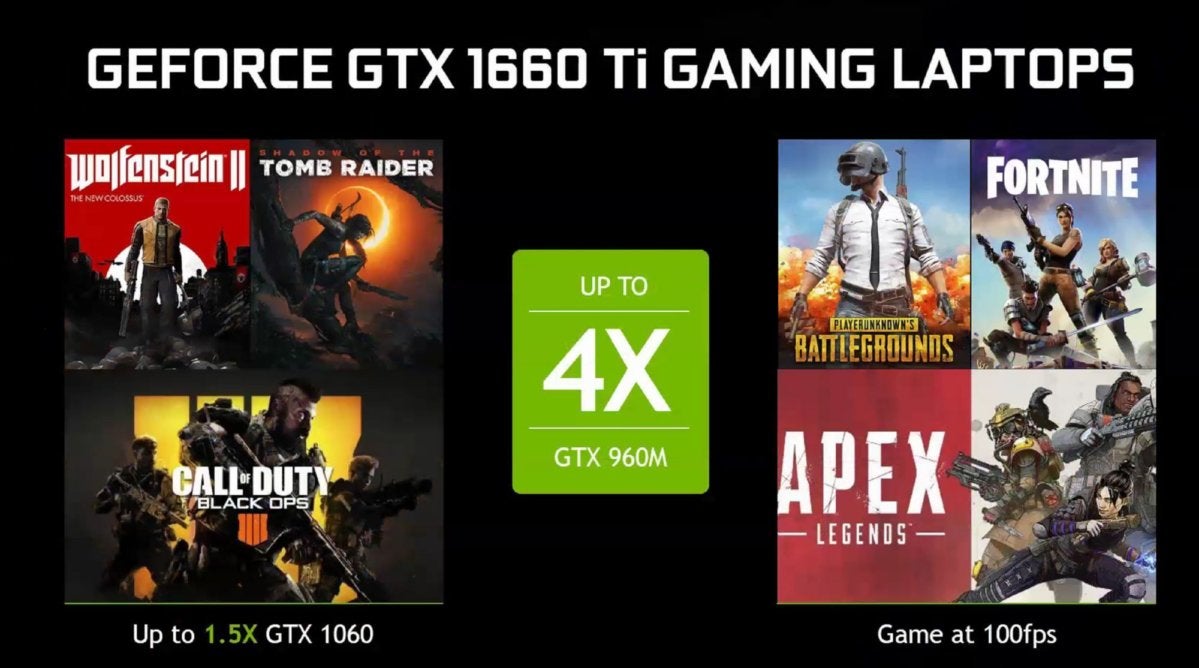 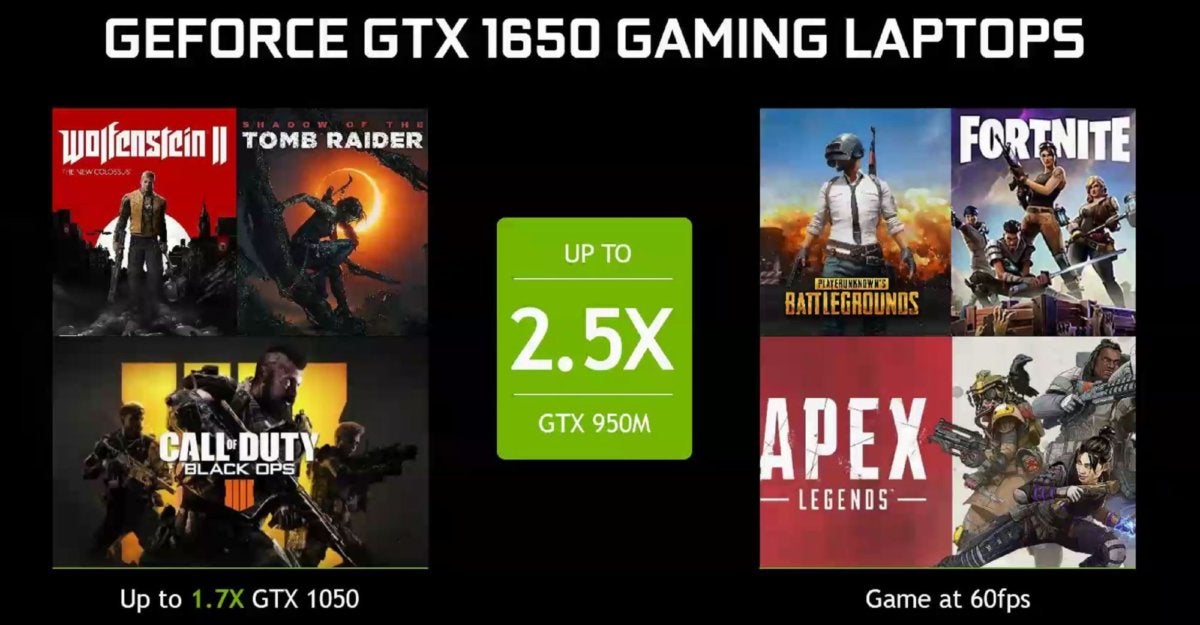 Don’t expect such a big leap in every game, though. The GeForce GTX 1650 and GTX 1660 Ti are built with Nvidia’s cutting-edge Turing GPU architecture (albeit without the RTX-exclusive hardware that enables real-time ray tracing). The Turing architecture overhauled how Nvidia GPUs handle certain tasks, splitting integer and floating point instructions into two separate pipelines that run simultaneously, rather than dropping both into a single pipeline and creating a logjam. That tweak helps Turing run much better in modern games that lean on asynchronous compute features, such as Strange Brigade and Rainbow Six Siege.

Look for bigger gains in titles like those, as you can infer from Nvidia’s performance numbers in this mobile GTX 1060 vs GTX 1660 Ti comparison:

Performance can also vary based on whether your laptop’s equipped with a full-force version of these GPUs, or a more energy-efficient Max-Q variant. Nvidia says the GeForce GTX 1660 Ti will use 80 watts untethered, or 60W in its Max-Q form. The GTX 1650, meanwhile, can be configured for either 50W or 35W.

If you’re coming from an older laptop, you’re in for a big treat. Nvidia claims that 75 percent of GeForce-equipped notebooks in the wild pack GTX 960m performance or less. The GeForce GTX 1660 Ti stomps all over it. 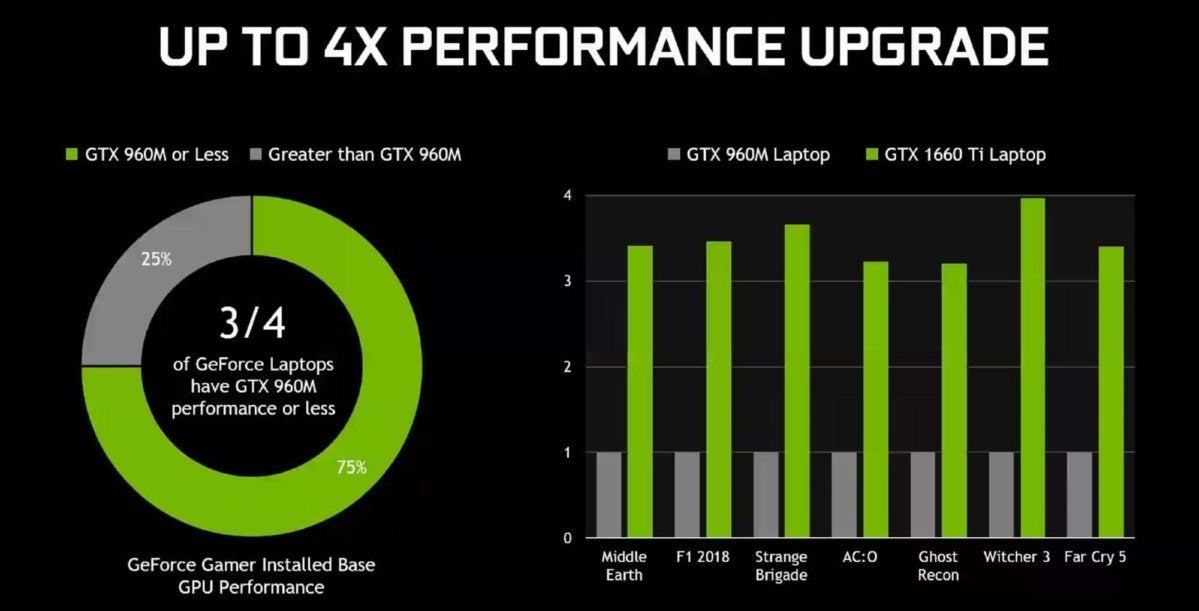 You’ll see an explosion of laptops with the new mobile GPUs on store shelves sooner rather than later. Nvidia says more than 80 different laptops with the GTX 1650 or GTX 1660 Ti inside are coming from all the major notebook vendors. The vast majority of those should appear within the next month. Pricing will start at $799. Again, expect that lower price to be for GTX 1650 laptops. GTX 1660 Ti laptops will likely cost north of a grand.

Nvidia didn’t provide a list of which laptops will ship with the new GPUs installed, but its press briefing showcased some individual models. The following gaming notebooks will start offering the GeForce GTX 1660 Ti as an option:

Meanwhile, these laptops will come with the mobile GTX 1650:

Finally, Nvidia’s making its newest hardware even more enticing by offering a “GeForce Fortnite bundle” with all GTX 16-series notebooks and graphics cards until May 22. It comes with 2,000 V-Bucks and the Counterattack cosmetic set shown above.